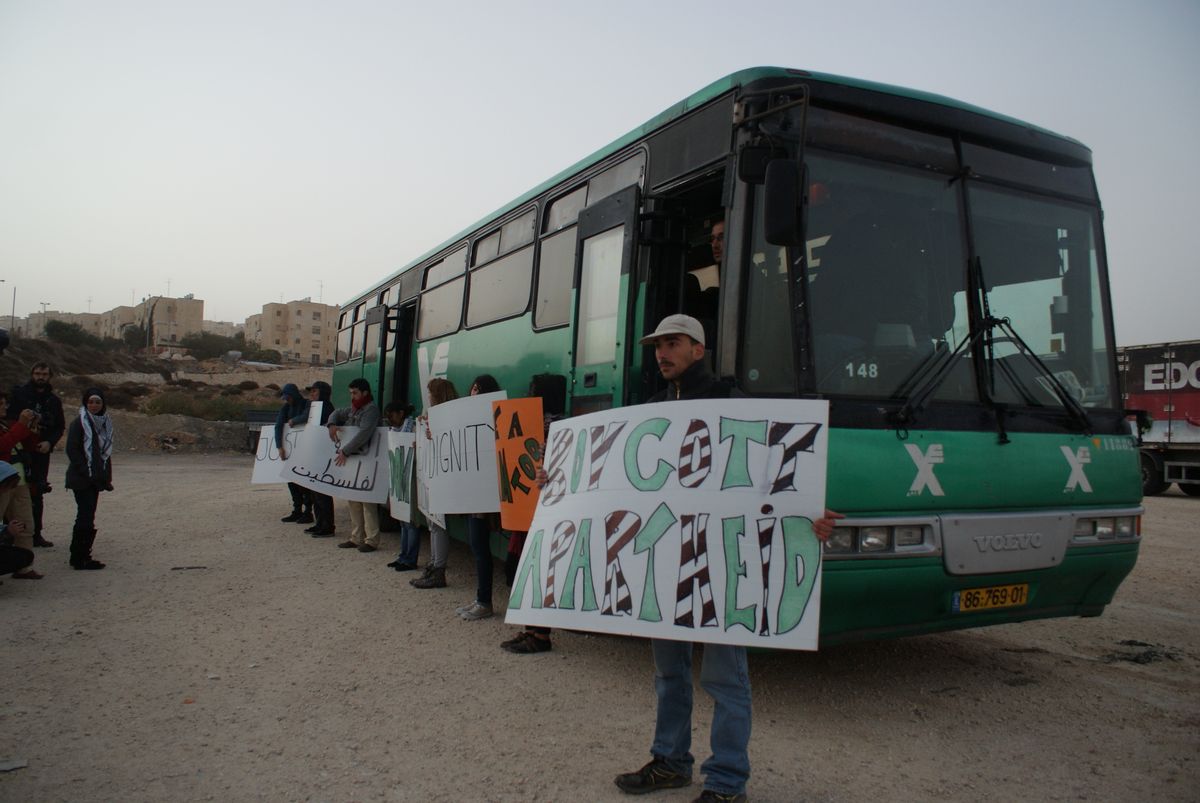 We headed for Road 60, one of the few main arteries in the Israeli-occupied West Bank, which is open both to Israeli and Palestinian travelers. When we finally arrived at a bus stop near the settlements of Psagot and Migron, it was difficult to tell whether the bewildered expressions on the faces of the waiting Israelis were due to the presence of the six Palestinian activists – who wore the emblematic checkered "keffiyeh" and T-shirts emblazoned with the words "dignity" and "Boycott Divestment Sanctions"– or the dozens of unruly journalists milling about the road, and even standing on the roof of the bus stop, who were on hand to watch the Israeli-Palestinian version of America's freedom riders of the 1960s.

Drawing inspiration from the African-American struggle to desegregate public transportation, Palestinian activists set their own "freedom ride" on Tuesday, the anniversary of the Palestinians’ symbolic declaration of independence in 1988. Symbolic because, despite their current quest for U.N. membership, Palestinians still live under Israeli military occupation, with all the restrictions on their liberty that that involves, including the freedom to travel, work their land, to build and to manage their own affairs.

“Although the tactics and methodologies differ, the white supremacists and the Israeli occupiers commit the same crime: They strip a people of freedom, justice and dignity,” said Hurriyah Ziada, the spokeswoman for the Palestinian freedom riders. Her name, appropriately enough, means "more freedom" in Arabic.

“We demand the ability to be able to travel freely on our own land and roads, including the right to travel to Jerusalem,” she told the dozens of journalists who had crowded into the courtyard of the state-of-the-art cultural palace in Ramallah, the town that, with Israel’s continued annexation of East Jerusalem, acts as the Palestinians’ de facto capital.

One key difference between the situation in the southern American states in the 1960s and the situation in Israel and Palestine today is that there is no actual law that forbids Palestinians from boarding Israeli buses. Palestinians with Israeli citizenship and Palestinian residents of Jerusalem do so on a daily basis, although Jews and Arabs rarely mix in the troubled "Holy City" and possess their own parallel transportation systems.

However, holders of West Bank identity cards live under restrictions imposed by the occupying Israeli military and are barred from entering Jewish settlements and Jerusalem unless they are in possession of permits to do so, which is rare.  So, while African-Americans were free to travel where they wanted but not to board whites-only buses, West Bank Palestinians are legally entitled to board Israeli buses but cannot ride them to their destinations. Such is the perverse logic of segregation and discrimination.

And this is what the six freedom riders set out to do: to challenge the ban on Palestinians traveling to Jerusalem, running the risk of arrest and possible attacks by violent settler extremists, who have recently not only escalated their attacks on Palestinians but have also increasingly targeted the Israeli military, Israeli leftists and human rights activists with what they call "price tag" violence.

The deadly serious confrontation has its surreal moments and light relief. As the six would-be passengers set out in search of a bus stop, the snaking convoy of perhaps 50 or more carloads of journalists followed on a sort of blind bus chase. This caused traffic jams on some of the narrower back roads used by Palestinians. (Another aspect of the occupation. Palestinians are not allowed to drive on many settler-only roads and so have to take massive detours to avoid them.)

The commotion eventually drew the Israeli police, army and the private security from one of the nearby settlements. But all of them seemed to be at a loss as to what to do. As we waited for a bus that would permit the Palestinians to board without just pulling away from the crowd, I spoke to some of the freedom riders.

“I haven’t been to Jerusalem for 14 years. It’s a dream of mine to enter Jerusalem,” said Nadeem al-Shirbaty, a 33-year-old ironsmith from Hebron, which is located just 19 miles from Jerusalem.

Huwaida Arraf, 35, the only woman and the only U.S. citizen in the group, said she refused to bring her U.S. passport along. “To be clear, Israel would not be able to do this without the United States’ financial support and political protection,” she told me. “It’s up to the American people to say, ‘No, we fought this during the civil rights movement in the '60s. We don’t accept it for our own communities, so we should not be funding it abroad either.’”

One of the settlers at the bus stop, who could have easily passed for a Palestinian had it not been for his kippah (yarmulka), voiced a concern common among Israelis. “We are scared that those people will come and blow us up,” he admitted to me, without giving his name. “If one or two or even a hundred come in peace, so what. All you need is one in a thousand to have a bomb, then what are you going to do? How are you going to stop it?”

These are two of the central ethical issues raised by the freedom riders. Although a tiny minority of Palestinians has been guilty of violent resistance and terrorism against Israelis, including suicide bombings intended to kill civilians, does this justify the collective punishment of several millions of people who have done nothing wrong? Does such collective punishment reduce or increase the chance of future attacks?

As it began to look unlikely that the freedom riders would manage to find a ride, Basel al-A’raj, a 28-year-old man from Walajeh, a village near Bethlehem, shrugged.  “We’ve been trying for over 60 years to bring our cause to the world’s attention," he said. "It’s not a problem for me to wait here for a few hours for a bus.”

A bus soon arrived that the freedom riders managed to alight and the assembled journalists quite literally tried to press-gang their way onto the bus as the driver desperately attempted to shut the door.

Shut out, I joined a number of other journalists who went ahead to the Hizma checkpoint on the outskirts of Jerusalem to wait for the bus. When the bus arrived,  Arabic-speaking police officers boarded and tried in vain to convince the activists to vacate the bus and informed them that they were under arrest for attempting to enter Jerusalem illegally and for disrupting public order.

“Our action has been a runaway success, regardless of what happens in the next few hours,” said Mazen Qumseyeh, a 54-year-old university professor.

“If they try to remove us from the bus, I’ll refuse to get off,” said al-A’raj, giving me a toothy smile from his undetected position at the back of the bus. “I will abide by the principles of the law, not military decrees, but civilian and international law, which guarantee my freedom of movement.”

A’raj told me that he was overcome with conflicting feelings of excitement and fear. “But we live with these mixed emotions all the time under occupation. Every day, homes are raided and people are arrested. The main difference is that, this time, there is media coverage.”

After a couple of hours, the Israelis delivered an ultimatum to the activists that they either get off the bus voluntarily or they would be forcibly removed. The police then carried them off one by one to a waiting police van, and the freedom riders shouted out their names and rejected what they regarded as the illegality of what the Israeli police were doing to them. They were released from custody a few hours later.

“This is only the beginning," promised Arraf before her arrest. "This is the first bus, but there are bound to be future attempts involving more riders.”