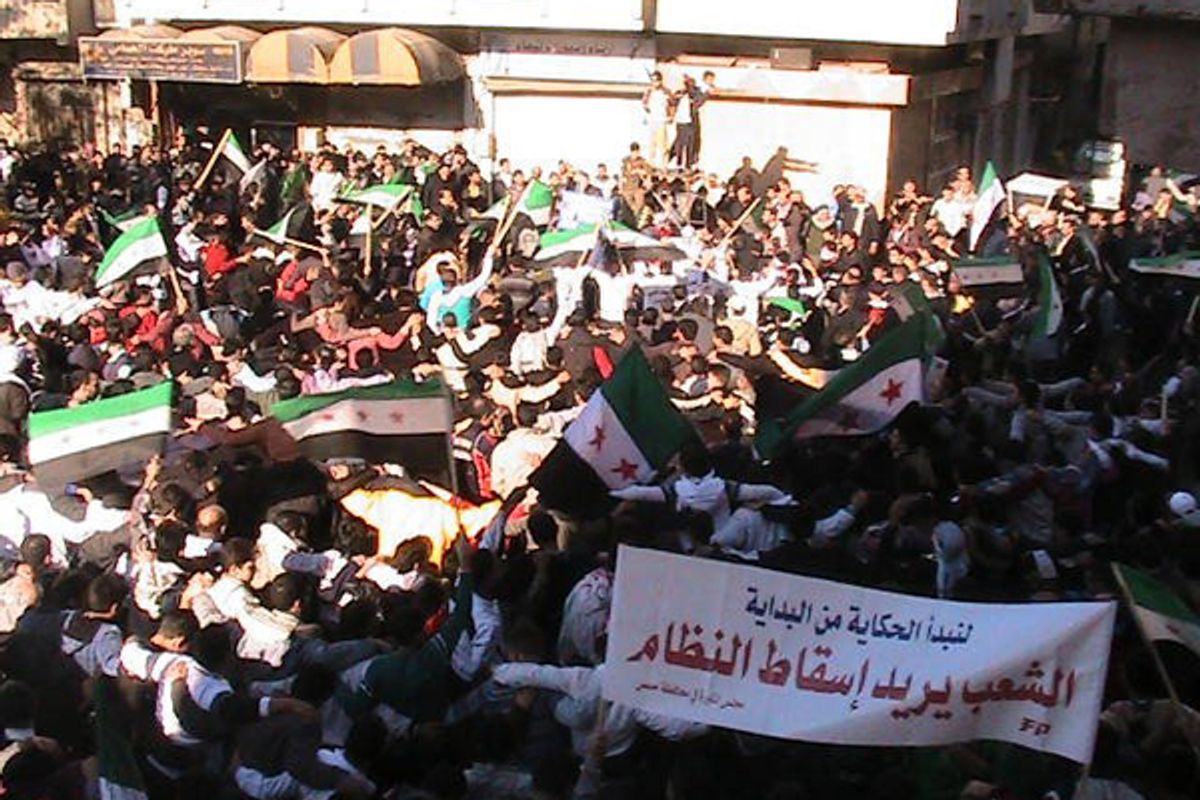 Demonstrators protesting against Syria's President Bashar al-Assad wave the old Syria flag as they march through the streets on the first day of the Muslim festival of Eid-al-Adha in Alsnmin near Daraa November 6, 2011. The banner reads, "People want the regime to step down". (Reuters)
--

BEIRUT, Lebanon — There were more than 30 of them, defected soldiers storming the military base from all sides, following the orders of an officer who once served in President Bashar al-Assad’s army, but who has now led rebels in the most audacious attack on the regime’s forces since Syria’s uprising began.

The target, said two commanders of rebel Free Syrian Army (FSA) who spoke to GlobalPost from inside Syria, was symbolic: A base for Airforce Intelligence, feared by Syrians as the most notorious of the Assad’s regime’s 17 branches of security, at whose hands even children, among them 13-year-old Hamza al-Khateeb, have been tortured to death.

This branch of the police state was in Harasta, one of the restive suburbs of Damascus where repeated onslaughts by secret police, the military and armed thugs known as shabiha have failed to quell months of protests calling for an end to the Assad family’s 41-year dictatorship.

“This was the first attack to target a headquarters for security anywhere in Syria,” said Abu Ali, an FSA commander interviewed by GlobalPost earlier this month, now operating in and around the protest center of Homs, but familiar with details of the Harasta attack.

“This branch of security is the worst of all branches in Syria and is well known for Syrians. It is one of Assad’s dens and yet we were able to successfully target it.”

On its Facebook page, the FSA said the strike was intended to “send a message to the regime that the Free Syrian Army can hit anywhere and anytime.”

The attack began at dawn on Wednesday. An FSA spokesman in Turkey, where leader of the FSA Colonel Riad al-Asaad is based, told GlobalPost that 35 soldiers were involved, five units of seven men each, attacking the base from all sides with Rocket Propelled Grenades (RPGs) and Kalashnikovs.

Prior to the attack, said Abu Ali, the FSA had received intelligence on the base’s defenses from soldiers inside Airforce Intelligence who had yet to defect but were sympathetic to the opposition.

“The Free Syrian Army stormed the checkpoints with mid-range weapons from all sides and over ran them by force. Some of the guards defected and joined the Free Syrian Army while others were killed,” said Abu Ali, a former officer in Military Intelligence who defected after being sent to Homs with orders to kill protesters.

“We killed many of Assad’s soldiers and assassinated members of Airforce Intelligence inside the base. We suffered a few martyrs and the rest retreated. We consider such an operation a huge success.”

A second FSA commander, also operating inside Syria, told GlobalPost the FSA units had occupied the base in Harasta for a few hours, before beating a tactical retreat and setting fire to it.

SANA, Syria’s state-run news agency, did not report the Harasta attack on its websites, focusing instead on the “huge masses” “flocking” to public squares to celebrate the anniversary of the “glorious Correctionist Movement,” the coup by President Assad’s father Hazef, which brought the family to power.

Meeting in Rabat in Morocco, the Arab League suspended Syria’s membership and gave Damascus until Saturday to end the killing of protesters or face economic sanctions from member states.

Both FSA commanders said the dramatic escalation of attacks by the armed rebels — which in the past two days they and activists said included RPGs fired at tanks in Daraa, the killing of several shabiha in Qseir, 40 kilometers southwest of Homs, the killing of at least eight soldiers and security in Hama province and an attack today on offices of the ruling Baath Party in Idlib in northwest Syria — came in direct response to the failure of Arab or international diplomacy to halt the regime’s assaults.

“The regime is doing shameful things. They are not listening to the Arab League, nor to the UN Security Council or to any country,” said Quteiba. In the past week alone, reporting gathered by campaign group Avaaz, found at least 200 people had been killed by Assad’s security forces, in defiance of an agreement with the Arab League to end the crackdown.

Avaaz now says it has verified the names of 4,216 people killed in Syria in the eight-month crackdown by Assad’s security forces, which began on March 15. With an additional 2,300 people Avaaz has registered as dead, but whose names have not yet been verified, the death toll for the Syrian uprising could possibly now stand at more than 6,500.

Sergei Lavrov, Russia’s foreign minister, which along with China has blocked U.S. and European efforts to pass a binding resolution against the Assad regime in the UN Security Council, said the situation in Syria was now “looking very much like a civil war.”

In Washington, State Department spokesman Mark Toner said it was “not surprising” that the opposition was resorting to violence, but condemned the attacks saying violence “really plays into Assad's and his regime's hands”.

France withdrew its ambassador to Damascus on Wednesday, following attacks on the French and Turkish consulates in Lattakia, on Syria’s Mediterranean coast, and the storming of the embassies of Saudi Arabia and Qatar by supporters of Assad.

But a leading analyst on Syria warned that though troops loyal to Assad were now facing a serious threat, supporters of the mainly Allawite regime, an offshoot of Shiite Islam, were growing radicalized in the face of a revolt led by Syria’s Sunni majority.

“Over the years the regime has invested more in the police state and distrusted the military. But the security services and their proxies have resorted to such forms of violence against ordinary protesters than an armed reaction is taking shape that is slowly overpowering them. Now they are exposed and need the army, but that relationship is largely broken,” said Peter Harling, Syria researcher for the International Crisis Group, based in Damascus.

“The regime retains considerable manpower and its base of support is being radicalized as it narrows. Many of its supporters are now in a state of frenzied fear and could fight in a drawn out confrontation, unless the pace of military defections steps up and ushers in an entirely different dynamic.”