My Brilliant Second Career: How I fished myself out of crushing debt 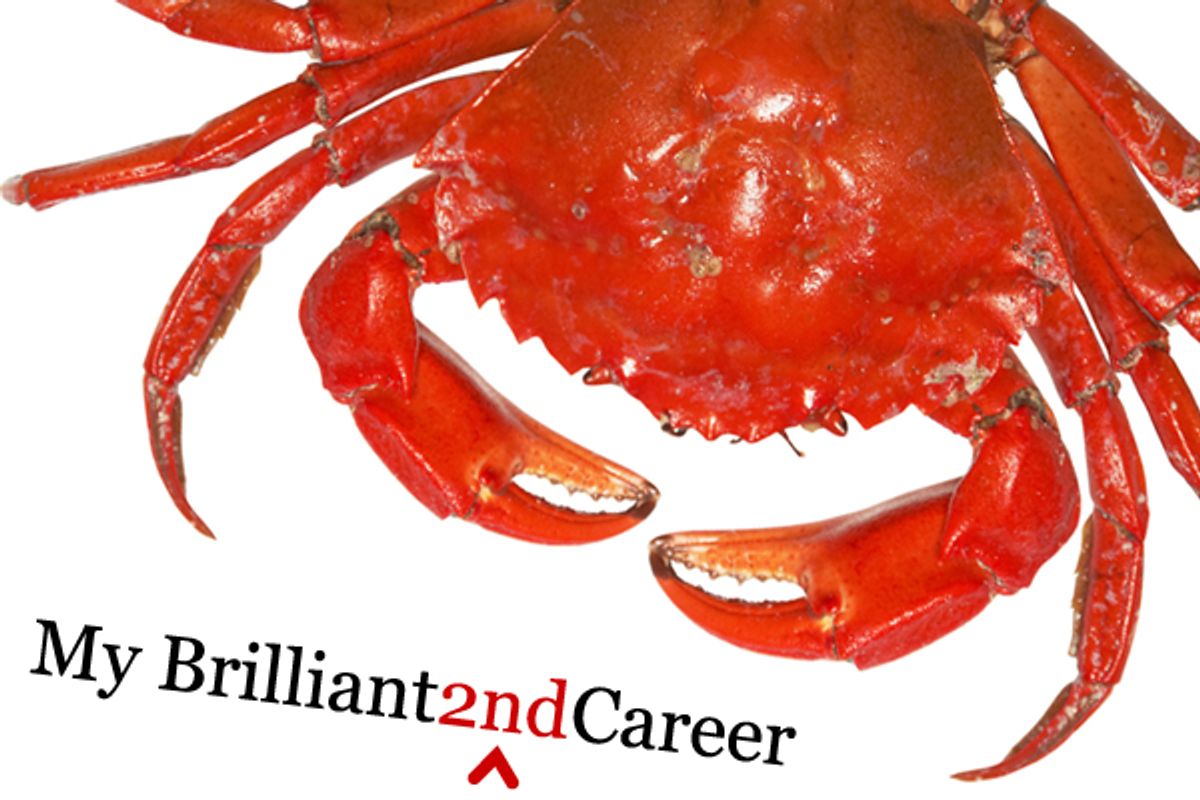 This is the second in a series about people who stared down the Great Recession -- and reinvented themselves along the way. Do you have a great Plan B success story? Post it on Open Salon, tag it "My Brilliant Second Career," and we might publish it on Salon -- and pay you for it.

I stood along the starboard rail of a fishing boat trying to guard myself from the icy wind and the frigid waves crashing on board. I kept stomping my feet and shaking my hands to keep them from going numb. We were on the Washington coast in late January working on a seemingly endless string of Dungeness crab pots. It was only 20 degrees, but the steady 30-mile-per-hour wind made it feel much colder. The pots were coming up stuffed with crab, but those crab had long stopped looking like little dollar signs. I was a world away from my old life, my old girlfriend, my old cubicle at the newspaper where I once worked.

It was 2:30 a.m., and I had been up for nearly 24 hours. All I'd eaten that day was three frozen burritos and a Styrofoam cup of ramen noodles. I'd forgotten what day of the week it was, because days of the week don’t matter when you’re fishing. The three of us on deck hadn’t said a word in hours. We retreated into our minds to cope with the misery of the night. I kept asking myself, “What the hell am I doing here?”

I racked up huge debt going to a high-priced, second-tier university for my undergraduate education. I thought I’d made the most of my college experience: I spent a semester abroad in Paris and was the editor of the student newspaper my senior year. I earned a double major and a solid GPA. But after I graduated, I found myself broke as hell and living paycheck to paycheck. I got a job covering the city beat for a daily newspaper in Salinas, Calif. Not a bad gig at a time when journalism jobs were dwindling. But as I kept grinding away at a job that didn't even require a high school diploma, I was drowning in $100,000 of debt.

Back on the boat, freezing water knocked me in the face. I had been so caught up in my thoughts I stopped paying attention -- a rather dangerous situation while fishing. The wave pushed my hood back and soaked my entire upper body. My crew mates laughed as I shivered and cursed. I couldn’t wait to get a few hours of sleep. I couldn’t wait to have a shot and a beer at the sleazy bar at the foot of the harbor, and I couldn’t wait for the season, only a few weeks old, to be over. Yet I loved the work and the sleep deprivation. The raw cold and the crab was a small cost for the chance to finally afford my future.

I had worked steadily since I graduated college in 2005, after about a year of volunteering, internships and working for free to get the experience to earn a decent wage writing. But after three years of making around $35,000 a year – first as a legal assistant and Web editor and later as a journalist – I was unable to make a single payment on my private student loans. And this was before the recession. I liked my job, even if I had to write the occasional fluff piece to fill space, but given my financial situation, I didn’t see much future as a journalist. I needed to make at least $65,000 a year to have what most financial planners would consider a “manageable” debt burden, and given the deteriorating state of newspapers that salary was years away.

AW, a good college friend, had been living what seemed to be the ideal life, working on fishing boats in Alaska during the summer and traveling the world during the winter. He told me I should quit my job and start fishing. I heard that deck hands were regularly making $10,000 a month during a five-month winter season. That was enough to hook me. Eventually, I left my job at the paper.

But life generally does not go as planned. I was fired from my first job on a light boat in the supposedly lucrative Southern California squid fishery. Squid fishing is done at night with small boats that shine high-powered lights on the water to attract the spawning squid, and large fishing boats, seiners, harvest the squid with large nets. It was three-and-a-half weeks of harsh electrocutions -- shocks that were the likely cause of death of another man a year and a half later -- a crash course in diesel mechanics and cabin fever. The old, obese skipper told me I was not man enough to work on fishing boats because I had refused to dump contaminated diesel into the ocean. Then he booted me.

It was like I had been caught up in gold fever -- I gave up one life in pursuit of another that was largely built on fantasy and best-case scenarios. The dreams of quick money were dashed. I had soft hands, no experience and little clue of how to handle myself on a boat. Maybe that’s when my better judgment should have kicked in, but I have always lived by the words of William Blake: “Prudence is a rich, ugly old maid courted by incapacity.”

Still, I had to pay down my debt somehow. My 100 grand is more than five times the national average of $19,839, according to findaid.org, but I am not alone. The Occupy movement that has captured the attention of the country is a response from many people in the same situation -- young, educated, highly indebted with few prospects for work that will allow repayment without hardship. I’m surprised we haven’t seen this sooner, given that the costs of education are steadily rising while opportunities for gainful employment are dwindling. Surely our economic model will have to change: Can we really keep trudging along in a country where a lucky few reap enormous profits from the debt bondage of the many?

Discouraged by my first fishing experience, I went back to the daily grind. I spent six months waiting tables, slinging espresso and sending resumes and cover letters into the ether of the recession. That’s when I received a call from AW. If I could be in Alaska in two days I would have a job fishing for Dungeness crab and salmon over the summer. I was dead broke with few options, so up to Alaska I went.

When I arrived in Wrangell, I was overwhelmed by a land of fantastic beauty in the middle of the southeastern panhandle, full of thick temperate rain forests, steep snowcapped mountains, an abundance of wildlife and rich in native Tlingit culture. Coming from progressive-radical circles in the Bay Area, however, I was not ready for life in Palin country.

A month later, I watched the skipper, Captain Ron, shoot a seal swimming alone in the water 30 yards away from the boat. I was shocked and disturbed. Captain Ron hated anything that ate salmon and didn’t pay for it. Therefore, seals, seal lions and otters had to die. In a perverse twist of logic, he actually liked organic products, because farmers’ use of pesticides kill vulnerable salmon eggs, and they don’t pay for the damage.

Captain Ron was an eccentric, gnomish-looking man who wore a uniform of his own making. I would never see him in anything other than a hickory shirt, Prison Blues jeans and suspenders -- classic Northwestern logger attire. He looked upon me with suspicion, since I was a writer who called California home. Most other fishermen eyed me that way, too.

The summer started off with 10 days of Dungeness crab fishing, which is a comparably easy fishery with lightweight 60-pound pots in protected inside waters. I had always prided myself on my physical fitness, but that fishery wore me down. At the end of the 10 days my arms ached with tendinitis, my sinews inflamed by the constant pushing, pulling, lifting and throwing of the pots. I recovered and spent the next two months seining for salmon.

That first summer was more or less miserable. I loved the beauty of the environment, but I hated most of the people. A common truism of those who call the Bay Area home is that they are easily offended and have an overdeveloped sense of indignation. That was certainly the case for me. I was quietly enraged by any hint of racism, sexism, homophobia and general bigotry, and I was often lost in the normal conversations of the hyper-masculine industry.

But if fishing can teach anything, it is how to cope with the uncomfortable, both physical and mental. In fishing, you either deal with the aches, pains, cold and exhaustion -- or you find another job. The same with enduring long periods of time in a confined space with people you may not like.

I made $12,000 in three months. It was far less than I had expected, and after I had paid a few bills I found myself dead broke again. Nine months later I was reluctantly back in Alaska, unable to find decent work in the time away from fishing. I had tried to delve into the dirty world of finance with my BA in economics. I was even offered a job at an alternative investment firm in San Francisco; once they saw my credit history, the offer was promptly rescinded.

Within a few weeks back on the boat I realized something had changed. I began taking great pleasure in the work of the body. I had found myself as the person on the boat with the most fishing experience and was given the title "deck boss." I was learning what I needed to know to be a career fisherman and I wanted to fish more. It’s said by many that commercial fishing gets into your blood; once you start you can’t stop.

I have spent roughly 18 of the past 20 months living and working on a boat, fishing for salmon in Alaska and for crab in both Alaska and Washington. I’ve put on 15 lean pounds, and have not suffered the dull ache of tendinitis again, even with the 130-pound Dungeness crab pots used on the Washington coast. The large chunks of money and rent-free living have been a boon to my finances. While still broke, I am now only 70 grand in the hole, nearly all private loans.

I write this in Mexico, where I am taking an intensive Spanish language program at the Universidad de Guadalajara. It is something I have wanted to do for years, and it is something I would not have had the time or money for in my old life. Life is not -- nor should it be -- all that one wants and desires. Yet it feels good to be able to accomplish many of my wants and desires with a job I never even imagined I'd have.