How I helped rescue the OWS library 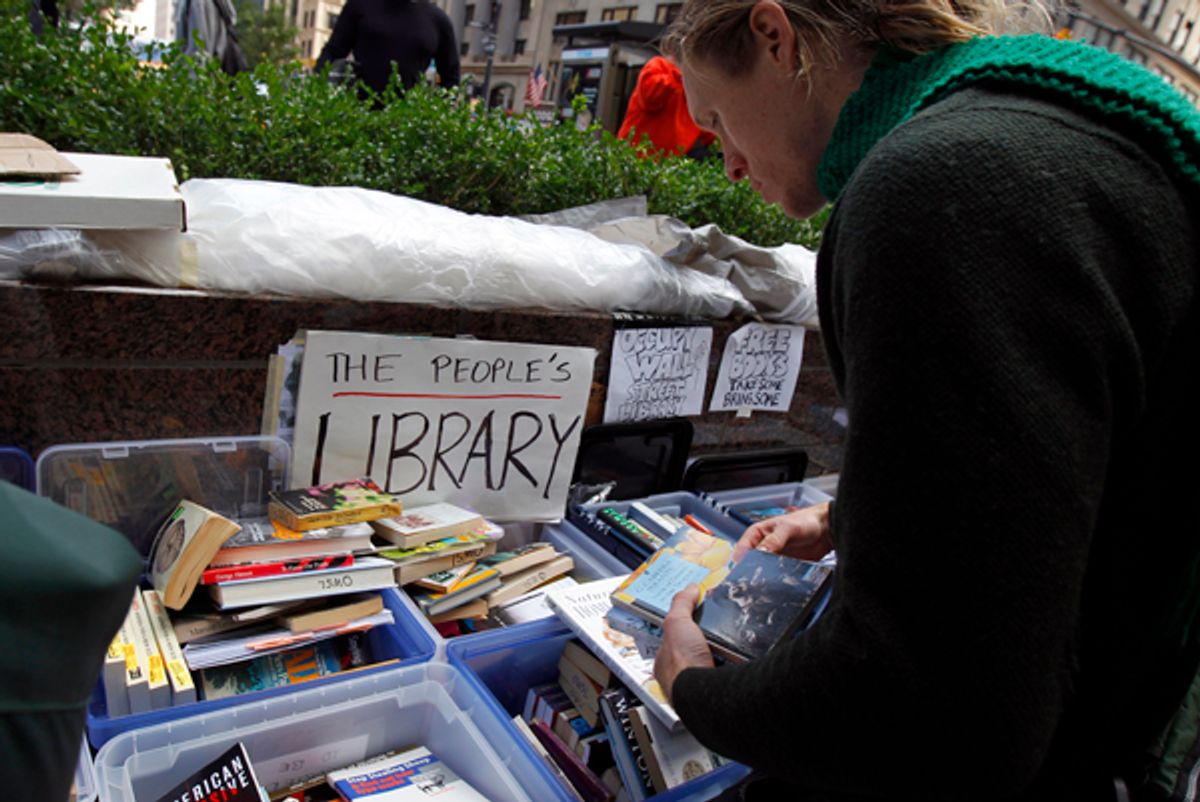 Yesterday I took my beat-up old station wagon into Manhattan to help recover some of the Occupy Wall Street Library books confiscated by the police during Tuesday's early-morning raid on Zuccotti Park. The skies were gloomy and gray when I left Brooklyn. It took me about 45 minutes to get there. There was traffic on the Williamsburg Bridge, and on Houston Street. Those are the best kinds of drives for contemplation.

I was thinking the whole time the city felt off-kilter to me. One day you think you know a place, that you live in the literary capital of the world, that all around you there are people who believe in books and art and culture and the importance of the freedom of speech. And then the next day you live in a place where 5,000 books can be seized without warning, many of them to be destroyed, and nothing can be done about it.

I have watched Occupy Wall Street mostly from the sidelines. I’ve visited twice in its two months, and recently participated in a group reading of Herman Melville’s “Bartleby, the Scrivener” nearby, but that has been the extent of my physical presence. I support what they are doing and feel that it is important (even if I do not entirely understand it sometimes), but it is just not my bag to spend time down there. But oh, the books! The books were my tipping point. Everybody has a tipping point.

I took the West Side Highway up to 56th Street to the Sanitation Garage, where supposedly all of the confiscated items from the park were being held. I had responded to a call for drivers on Twitter, and had emailed a woman named Mandy, a librarian who had written a post on the Occupy Wall Street Library’s website. I called her when I got there, and it turned out she was in Indiana, and coordinating some of the volunteer efforts from there. She helped me connect with one of the librarians at the Sanitation Garage, and just like that, I was a volunteer. I forget it works that way sometimes, working from home like I do, and living in my head so much as a fiction writer. But all you have to do is show up and then you are part of something.

Other volunteers had taken the bulk of the books before I got there, although there were not a lot to start with. I had read on the library’s website that morning that the librarians had only found 26 boxes total at the Sanitation Garage, which is definitely not 5,000 books' worth of boxes. What happened to the rest of them? We will probably never know.

I took what remained: five boxes of books, a table, some folding chairs. Everything had a battered veneer. There were a couple of volunteers there, and a photographer who shot a photo of them loading up the car that ended up on the New York Times website (making me wish I had washed my car first, or at least cleaned out the trunk). I kept thinking about how if you didn’t know the back story, it could have looked like I was getting some junk to take to the Goodwill, or to set up for a yard sale, or like I was a college kid moving some stuff from the dorm to take home for the summer. There was so much struggle and anguish around these everyday things. When does an object become a symbol? All I know is you cannot force it.

The librarian, Michelle, told me that they were still trying to secure storage space. I offered to take them to Brooklyn with me, and either house them myself or in the bookstore where I work. It started raining as I left. Just in time. That new, extremely sad Adele song came on the radio. I felt elated and sad at the same time. Five boxes of books, a table and some folding chairs. It was nothing, not much at all. Still, I felt like I was transporting gold.

Later that night I read on Twitter that the librarians had set up shop again, and later after that, another tweet: “NYPD & Brookfield have taken the People's Library again. and we love you all.” Now they've gone mobile. I have the books whenever they’re ready once more. I’ll bring them wherever they need to go.