The NYPD has discredited itself 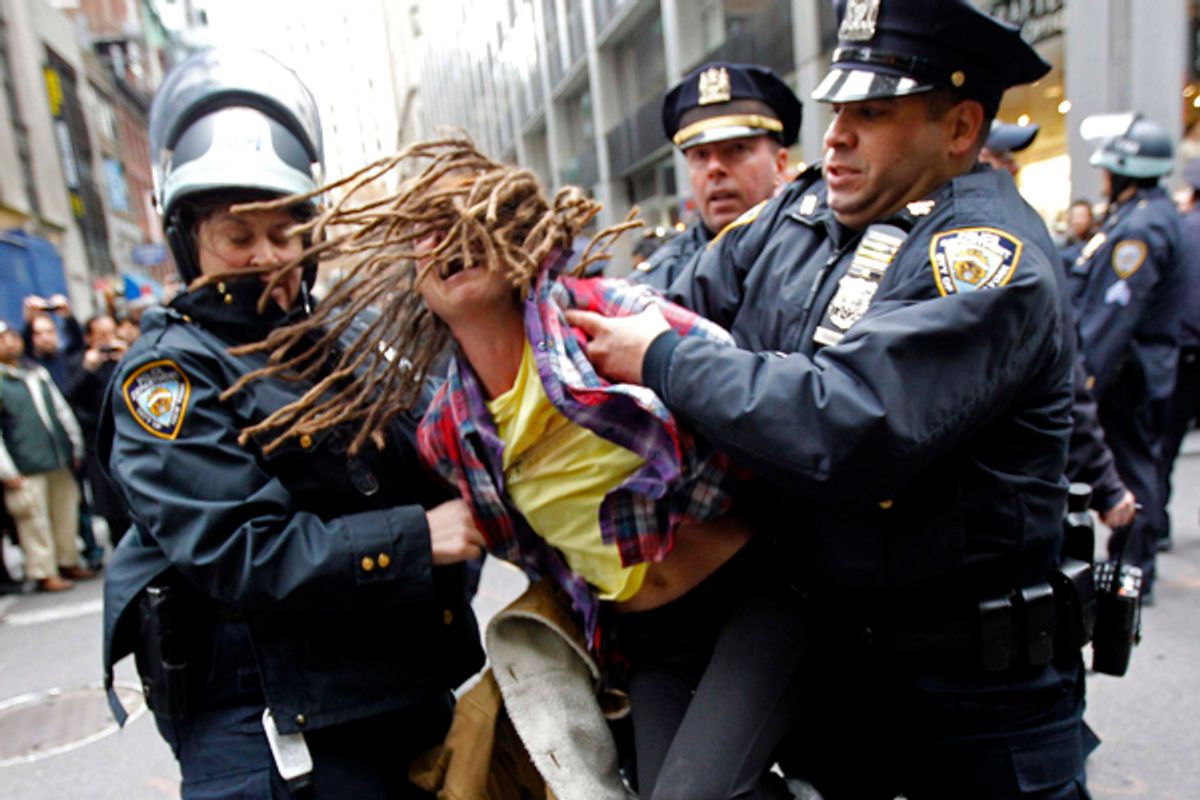 In early stages of Occupy Wall Street, I sometimes encountered people who harbored a legitimate concern: Wouldn't prolonged media attention to altercations between police and demonstrators distract from the movement’s message?

This apprehension always struck me as misguided. What could be more central to Occupy's guiding philosophy than the idea that the rule of law has been subverted by corporate interests? In collusion with government functionaries and beyond meaningful accountability from the public, these interests have created a separate realm of law for themselves -- one that orients the financial and political systems in their favor, to the detriment of everyone else. If this is indeed true, and the law itself is marred by a systemic corruption, then law enforcement --  manifested physically in the form of police officers -- is an  appropriate focus for a social movement seeking redress of grievances.

As Occupy Wall Street grew, the New York Police Department's "crowd control" tactics became increasingly bizarre and aggressive: historic mass arrests, motor scooter attacks, destruction of books, ramming horses into demonstrators, putting New York Post reporters in choke holds -- to name only a few.  And following Tuesday's brazen raid of Zuccotti Park, carried out in the dead of night, the NYPD indicated that de-escalation is not on the horizon. Quite the opposite, in fact. Police officials at the highest ranks, under the direction of Mayor Mike Bloomberg and Police Commissioner Ray Kelly, have taken to simply making up the rules as they go along.

In the same way that financial elites rig the political system, law enforcement elites like Bloomberg and Kelly have rigged the criminal justice system. Occupy Wall Street is hardly the only victim. The NYPD is on pace to make 700,000 extralegal "stop-and-frisks" this year alone, while its own officers skirt accountability for their misconduct. Deputy Inspector Anthony Bologna, who was sanctioned by NYPD Internal Affairs for pepper-spraying at least four demonstrators without provocation, received a maximum punishment of 10 lost vacation days on account of his actions.

If you're an ordinary citizen, and you get caught on video dousing people with noxious gas like Bologna did, you get summarily locked up. And if you're young and black, expect to receive the law's full wrath. But when you're an NYPD commanding officer responsible for all of Manhattan below 59th street, like Bologna was at the time of his attack, you get essentially a free pass.

Additionally, throughout my coverage of OWS, various police officials in plainclothes have refused to identify themselves upon request -- a violation of NYPD patrol guide procedure 203-09, effective June 27, 2003, which states that all "members of the service" are required to "courteously and clearly state [their] rank, name, shield number and command, or otherwise provide them, to anyone who requests [they] do so. [They also must] allow the person ample time to note this information."

Among the men who violated this directive are Lt. Daniel J. Albano, described in a 2009 court document as a "Lieutenant in the NYPD legal bureau and a high-level policy-making official for the NYPD.” When I asked Albano whether he was even with the NYPD, he replied, “I’m the plumber.”

Another is Sgt. Arthur Smarsch. On Tuesday morning, demonstrators were allowed back in post-powerwashed Zuccotti Park for a short time. Within what seemed like a half hour, officers began to force people out again. There was much confusion. Someone finally prodded Sgt. Arthur Smarsch to explain what was going on, and I heard him say that there was a “suspicious package” in the park. He then told an NBC4 reporter his last name upon request.

Smarsch was misinformed, because no other official ever mentioned anything about a "suspicious package," nor was any search of the park ordered.

I recalled first seeing Smarsch at an early-morning march on Oct. 14, when he was unusually violent with demonstrators -- even by NYPD standards -- for no real discernible reason. He would not provide me (or several others who asked, including members of the National Lawyers Guild) with his name. I later retrieved it by other means. Smarsch is the director of Manhattan South Borough.

During the Zuccotti Park eviction, the NYPD enforced a strict no-public-access policy in both the park and its surrounding area, ensuring reporters would be virtually prohibited from observing the raid. Press, credentialed or not, were repeatedly barred from proceeding past the newly formed police line. Journalists associated with the Associated Press, the New York Times, the New York Daily News and other outlets were arrested.

At one point that morning, I got stuck in a chaotic mass of people, and was nearly battered with a baton while attempting to record video. Some NYPD officers seemed to enjoy all this immensely, especially Police Officer Toussaint -- one of the several who laughed as they pummeled everyone in their path. I saw one man get smashed in the face with a riot shield; another was knocked over the hood of a taxi.

When I asked one officer why it had suddenly become unlawful to stand on that portion of the sidewalk, she answered, "You're blocking pedestrian traffic."

Someone called out, “We are pedestrian traffic!” The officer responded, “So are we.”

The officer’s remark, of course, was senseless. Taken at face value, it would presumably mean that those of us being impeded from standing on this normally open sidewalk were ourselves responsible for the ensuing obstruction of pedestrian traffic. As if the hundreds of amassed riot cops or newly erected metal barricades had nothing to do with the blockage that she so dryly referenced.

It is not good that NYPD officers now live in a world where coherency of argument is no longer even an aspiration. Having spoken to over a hundred police officers throughout Occupy Wall Street, about 70 percent respond to queries by saying nothing at all, another 15 percent grunt or mutter something inaudible, 10 percent make some kind of dismissive remark, and the remaining 5 percent are willing to have a human conversation.

If this is the reality of police behavior at a political demonstration in downtown New York City, what has happened to the reality of policing? The NYPD, ostensibly tasked with maintaining public order, has proven that it cannot handle political dissent without exerting anything less than military-style force. For two months, it has continuously abridged the rights of citizens to peaceably assemble, and of journalists to document these assemblies. It has lost its claim to legitimacy.