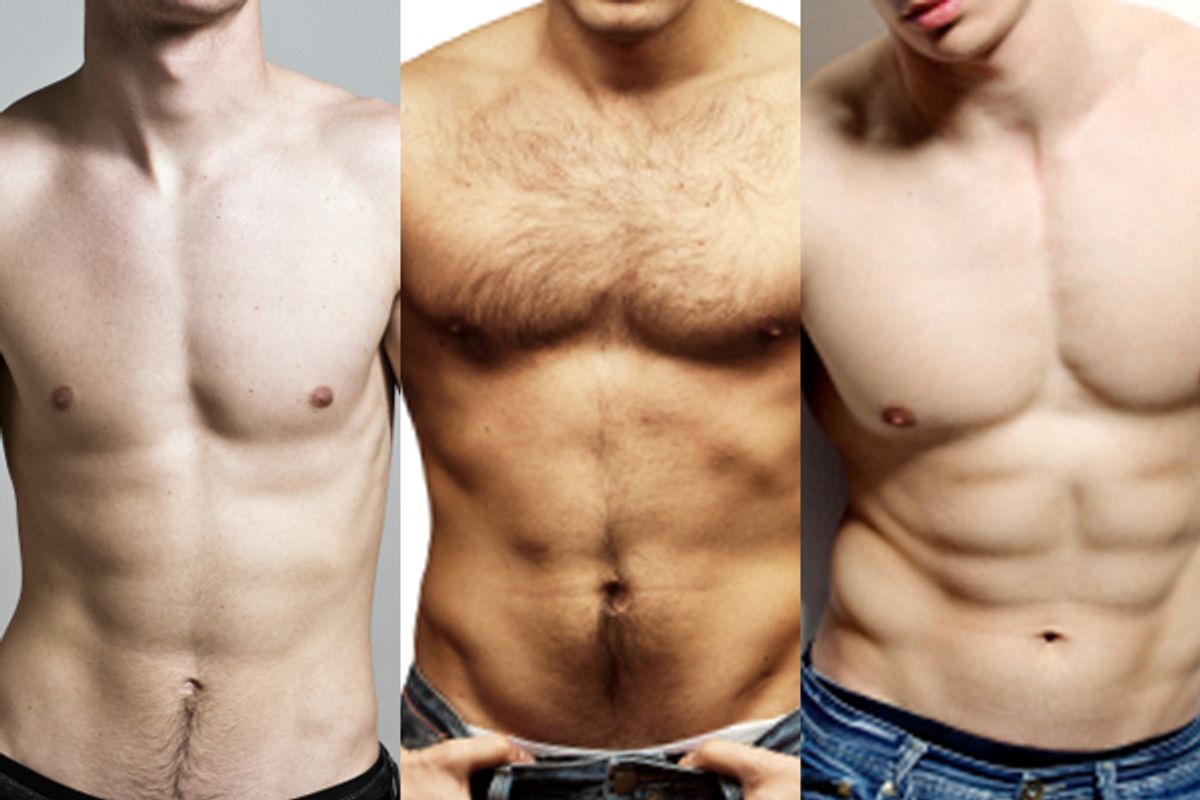 Thomas Rogers, Salon editor: Over the last few weeks, you and I have spent a lot of time discussing the meaning of male sexiness as we've put together our annual Sexiest Man list. We've been doing that list in one form or another for the last five years, and every year it turns into a battle between editors, between writers, between interns (all of Salon has painful memories of Zach Galifianakis-gate 2010).

Part of what makes this process so complicated is that, unlike People's Sexiest Man Alive list, our list is premised on something more complicated. We're looking for men that aren't just physically attractive, but actually have other sexy qualities -- that are interesting and smart or edgy, and this year in particular, politically aware -- and as a result, people's suggestions tend to offer a lot of insight into their own preferences and personalities. But this year especially, the differences between gay men's and straight women's notions of attractiveness have become a talking point since, as you're probably aware, you are a straight woman and I am a gay man.

Tracy Clark-Flory, Salon sex writer: You know, I'm dying to know your thoughts on Ryan Gosling's sex appeal. Before our list turned toward a more earnest vision of sexiness, he was the subject of much debate: He seemed too obvious to include on the list but too obvious to not include on the list. I've made my feelings on this topic well-known -- although even I am experiencing fatigue at this point -- but it's always seemed that you have a lack of libidinous feeling for Gosling. Somehow, I just don't see you getting hot and bothered over the sex scene in "The Notebook." Am I right? And does he fit a "type" in the gay universe?

Thomas Rogers: It's funny because there's this cliche about gay male attraction, that we're more interested in muscle-y, well-groomed men -- partly because we're more visually oriented -- while straight women are more likely to be attracted to the "regular guy." The gay male obsession with the muscle queen has a curious history that goes back to the years immediately following Stonewall, when something called the "clone" aesthetic appeared. The clone was a man who was muscular, and manly, and generally wore jeans and work boots and tight T-shirts. It was a hyper-masculine look, a way of compensating for the perceived effeminacy of gay men. And although the clone has disappeared since the '70s, it has since morphed into the steroidal, plucked circuit boy -- an obvious example of this would be Reichen Lehmkuhl, from "The Amazing Race" and "The A-List." These are the kinds of guys that most people tend to think of when they picture upper-middle-class white gay men, and the people that tend to populate gay ghettos, like Chelsea, in New York.

Of all the people we've discussed, Ryan Gosling is the closest to that gay aesthetic. He's definitely buff and handsome in all the traditional ways, and he's definitely very Manly (with a capital "M"), even though his masculinity does seem affected (New York magazine has pointed to his gradual move from a Southern Ontarian to a working-class Brooklyn accent). That said, there's something about him that leaves me cold, and I'm actually fascinated by the fact that he doesn't seem to have a huge following among gay men. It's a little perplexing to me, but it might be because his career really became big when he played a very heterosexual role in "The Notebook," or the fact that he's never played a character that comes close to being gay, or the fact that his self-deprecating persona isn't over the top enough for gay culture to grasp onto. Mostly, I find him physically attractive but otherwise not particularly interesting.

That said, I'd love to hear what you think distinguishes the kinds of men gay guys are attracted to compared to straight women. What do you think is the overriding distinction?

Tracy Clark-Flory: It's funny, because when I've been in gay bars, I've thought: This is my own personal heaven -- until I remember that none of the men are straight. Then it seems more like hell. This is likely a factor of the kind of gay clubs that I've gone to: They're heavy on Lady Gaga and "steroidal circuit boys." The men are a certain type of beautiful, like they just stepped out of a Christina Aguilera music video circa 1999. I've found myself giggling uncontrollably at the eye candy, feeling like I'm getting a contact high from all the free-flowing testosterone. I've also found that some of the men in these bars are very eager to flirt and dance with me and my female friends, which goes along with the "clone" history; it seems there's a real desire to play-act heterosexuality in an exaggerated, and maybe even defensive, manner.

In general, think it's really difficult to say what differentiates gay male and straight female attraction as a whole because individuals vary so dramatically, even just within each group. I appreciate what seems from the outside like a reverence for the male form -- eroticized in a way you just won't see in lady-mag pictorials of boring beefcakes. But I know plenty of straight women who find it all too much -- too graphic, too scary, too aggressive. Some straight women love hardcore gay male porn, while others find it horrifying -- I could go on and on. If I were to attempt an answer in broad strokes, though, it would be that the difference is in the romantic narrative. I think the back story is especially important to women. For me, the appeal of Gosling has actually very little to do with his physicality -- based on looks alone, he's just another handsome guy. It's the persona that he's cultivated through the roles he's chosen and the interviews that he's given. He embodies the most beguiling type of romantic hero there is: The sensitive bad boy. He may be poor or a crack addict, depending on the role, but he's always loving, devoted and romantic. I think there's a real awareness among straight women of just how silly and unrealistic this is. That's part of why these memes have been so wildly popular -- they all poke fun at the absurdity of this romantic fantasy, while at the same time reveling in it.

Thomas Rogers: I do think the cliche of the gay male being very interested in the superficial elements of male sexiness is changing, actually. The rise of bear culture (and its hilarious offshoot of otter culture) has helped to splinter standards of attractiveness in the gay world in some really interesting ways. You know, I always feel like I'm writing about generational change and gay culture, but I do think there's something interesting that's happening right now. The aesthetic among the younger gay crowd, the people I know who live in the alternative gay ghettos in New York or Toronto or elsewhere, tend to be a lot scruffier, a lot "bearier" than the people you've described (and generally more toward many of the people you see on this list). The overall aesthetic still seems to be a bit more pronounced and artificial than among straight men -- the haircuts a bit more extreme, or the beards a bit more trimmed, or the arms are a bit more worked out -- but not that much. So we might be seeing a bit of a shift there.

One of my early suggestions, which was promptly shot down, was Damian Abraham, the lead singer of the hardcore band Fucked Up. Abraham, I had thought, would have a number of things going for him. For one, he's in one of the buzziest bands of 2011. And he's also a pretty awesome guy -- when they won a massive Canadian music prize in 2009, for example, he gave the money to a charity for aboriginal women, and he's done literacy work. And yet, he didn't get any love from straight lady folk. I wonder if it's because Abraham is, by all accounts, a "bear" -- a large hirsute man. In the course of my life, I've gravitated a lot more toward bear and otter culture (otters are basically skinny, furry gay men) than toward the mainstream Chelsea aesthetic, so my love of Abraham might have to do with the fact that he's really the opposite of the muscle queen. (I should point out that I was definitely on Team Galifianakis back in 2010.)

Tracy Clark-Flory: There are certain bear qualities that I find irresistible -- like body hair, stoutness and the general air of rugged masculinity. I'm especially partial to "muscle bears" (see: Brian "The Beard" Wilson, my choice for last year's list). But Abraham doesn't do anything for me and I will admit that it's largely due to the belly. That's not to say that I haven't been attracted to larger men before -- after being charmed by their dazzling intellect, sense of humor or what have you -- but on a strictly superficial level, no. (I will also add that what I have heard of Abraham's musical stylings has not swayed my initial superficial response.)

Thomas Rogers: I do think this year's list posed an interesting challenge. Unlike previous years, where we included actors, we were limiting ourselves to people who were politically aware, and in line with the changes in the Zeitgeist that have occurred, with the rise of occupy and the dismal state of the economy. It seems a little ridiculous to ask, "What is sexy during a time of economic crisis?" It's sort of like that Onion piece after 9/11 that asked, "What is sexy after 9/11?" The answer is, of course, that sexy people are sexy. But a few people have written in the past about the ways in which poor economic times change the way we think of sex, and manliness in particular. One could argue that, in times like these, we become more attracted to strong masculine figures who can offer security. But I honestly think that, if anything, a strong sense of groundedness and perspective become more attractive. And I think our list reflects that.

Tracy Clark-Flory: I agree. The Alpha Male certainly reigned in the 9/11 aftermath, but there's a hunger now for a masculinity that is thoughtful and measured. Gender roles have had to change and adapt throughout this recession; and as a result, many people's sense of what it means to be a provider has shifted. We're living in the 21st century: Being able to slay the largest wildebeest is no longer enough.That reminds me: I've spent time at Occupy protests both in Zuccotti Park and at Oakland's City Hall, and I have to admit to being at times flustered by the supreme cuteness of some male protesters. I'm not going to start a "Hot Guys of Occupy Wall Street" blog or anything, but it was certainly a reminder of how attractive involvement and passion can be -- and how thoroughly unattractive apathy is. Maybe that's somewhere gay male and straight female attraction can meet.