He's suddenly breathing down Mitt Romney's back in the Granite State, at least in one poll 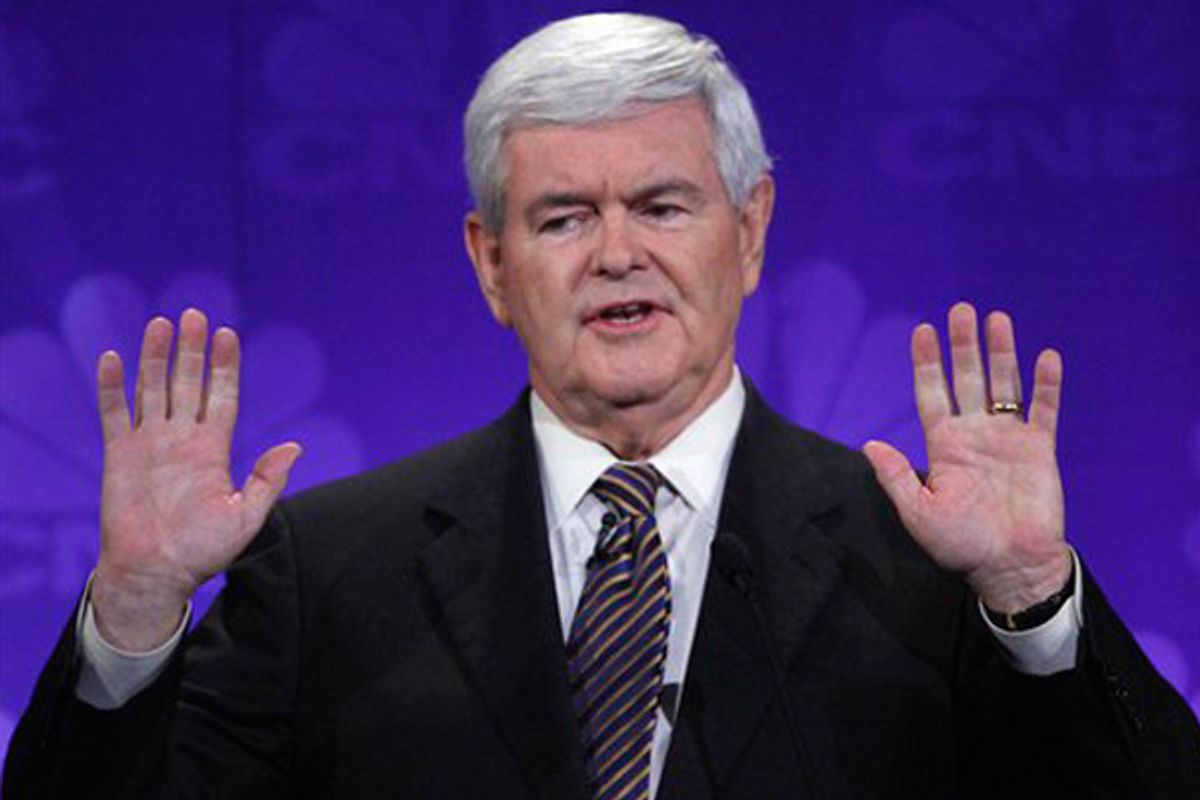 In recent weeks, three polls in New Hampshire have Newt Gingrich struggling to break out of single-digit territory, just like every other Republican candidate not named Mitt Romney. One survey in late October put him at 5 percent, another around the same time put him at 8, and one conducted last week gave him 11 percent. In those same polls, Romney received 40, 41 and 40 percent.

New Hampshire, of course, is supposed to be the closest thing Romney has to a firewall. He's been a familiar name in the state for nearly two decades -- some Granite Staters can probably remember television ads from Romney's 1994 Senate race against Ted Kennedy -- and he seems like a good cultural fit for its GOP electorate, which tends to frown on strident cultural conservatism. He even owns property on Lake Winnepasaukee.

So what's happening? The short answer is that Gingrich's image has remarkably improved. He now sports a 59-31 percent favorable rating among New Hampshire Republicans. In Magellan's last survey in the state, conducted three months ago, Gingrich was viewed favorably by just 29 percent of Republicans (and unfavorably by 60 percent). His overall support was at two percent in that poll. According to Magellan, Gingrich is doing particularly well among Tea Party supporters (a 38-21 percent edge over Romney) and self-identified conservatives (a 34-27 percent advantage).

Granted, the numbers are being received somewhat skeptically by political watchers. Magellan is not a brand name outfit and it remains to be seen if more established pollsters find similar results. And even if the numbers are accurate, there's the question of the sudden scrutiny Gingrich is now facing: Will it put a quick end to his surge, just as it's done for several other candidates this year?

That said, it may be time to rethink the common assumption that New Hampshire is a poor fit for Gingrich. The state's GOP electorate is actually very conservative, but mainly on economic issues. Only about 20 percent of Republicans in New Hampshire call themselves evangelical Christians -- compared to about 60 percent in Iowa. And while Gingrich is doing his best to win over the Christian right, he's not exactly portraying himself as a moral warrior, probably because of his own history with divorce and adultery. The New Hampshire primary has produced surprise winners before, like Pat Buchanan in 1996. The state may actually be fertile turf for Newt.