After protesters rally to his defense, ICE releases undocumented Oakland occupier who was arrested while meditating 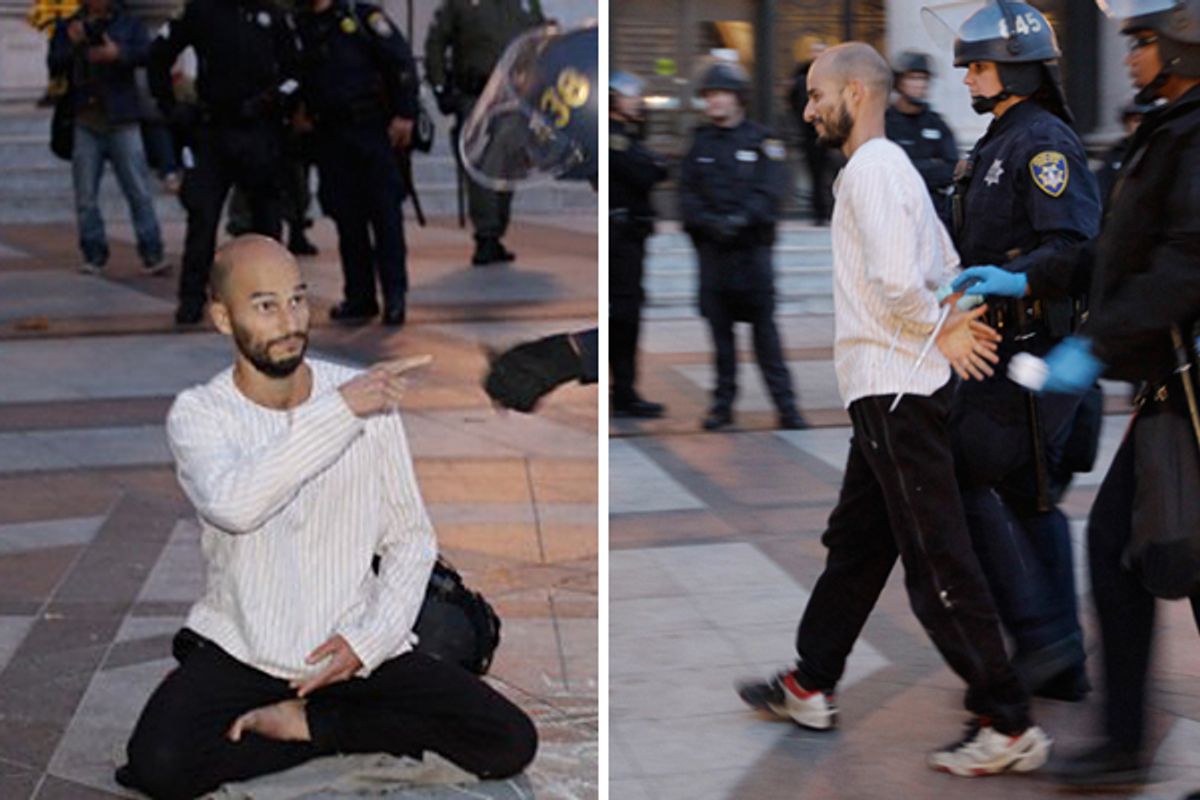 Police arrested Pancho Ramos Stierle as he was meditating at the Occupy Oakland encampment on Monday, Nov. 14, 2011. (Ap/Paul Sakuma)
--

An undocumented Oakland occupier arrested earlier this week was released from Immigration and Customs Enforcement custody on Thursday after  his supporters bombarded ICE, local officials and Rep. Barbara Lee with demands for his release. Francisco "Pancho" Ramos-Stierle, a Mexican-born former graduate student in astrophysics turned community activist, became a cause celebre among his fellow demonstrators after he was arrested Monday while meditating during the police dismantling of the Occupy Oakland Camp in Oscar Grant/Frank Ogawa Plaza.

"This is totally the revolution of the human spirit," he told friends in a conference call after his release, "and this is such a pleasure to be surrounded with all of you."

ICE can still recall Ramos-Stierle for a deportation hearing at any time but supporters are claiming victory for the man they call Pancho and vindication for the message of "restorative justice." While critics may wonder what the immigration issue has to do with Occupy Wall Street’s over-arching message of political and economic inequality, Pancho’s friends have no trouble connecting the dots.

Melissa Dickman, who played a major role in “Team Pancho,” the group of friends and lawyers who mobilized petitions and phone calls on his behalf, said  immigration has become a troubling issue in America “because of the corporations and the capitalist model we have. Folks move to the U.S. because of NAFTA because we’ve made it impossible for folks to live where they are. It’s a byproduct of capitalism.”

But Dickman insists Pancho's saga is also a spiritual one. She quoted Pancho’s version of the 99 percent meme: “We are the 99 percent facilitating the healing of the 100 percent.” Pancho and his friends emphasize fostering connections: “There is something spiritual about this, even in our relationship to one another," she said.

In jail, Pancho wooed police officers with his earnest philosophy.

“We were in shackles and we were in handcuffs," he told reporters in a conference call after his release, "but those people [deputy officers] they were in handcuffs and shackles in their soul. So we were just providing keys to them. So we said, ‘You know, you don’t need to be doing this.’”

Pancho’s own vision for the movement’s future is tied up in what he calls the “constructive program” of the occupation. He argues that the Occupy Wall Street movement should not to get too caught up in demonstrations, saying 90 percent of the occupation community’s energy should be spent on construction and only 10 percent on protests.

The morning of Pancho's arrest, nearly everyone in Occupy Oakland had agreed they would march to a nearby intersection, to strategically avoid arrest by a police force intent on dismantling the encampment. A few people, including religious leaders in the interfaith tent, chose to stay, saying they wanted to use their community positions to send a political message. Pancho’s immigration status made him much more vulnerable, but he also chose to stay.

An officer approached him while he was meditating, Pancho recalled.  "Hey man, if you don’t move you’re going to be arrested," he said. Because Pancho takes a vow of silence every Monday, he handed the officer a scribbled note that read, ”I practice silence, but I’d like you to hear that I love you.” After the officer read it, he smiled, and thanked Pancho. Then he asked, “Are you going to move, or are we going to arrest you?” Pancho wrote back, “I’m meditating.”

So he was were arrested. After Alameda County authorities dismissed charges against him and about 20 other protesters, Pancho remained in detention because of his undocumented status. Thanks to the hotly debated Justice Department program known as Secure Communities, Pancho was handed over to ICE detention Thursday and his friends feared he might be immediately deported as many people are. County officials told Inside Bay Area that they had no authority to keep ICE agents from deporting Pancho.

Yolanda Huang, one of Pancho's lawyers, disputed that, saying that enforcement of ICE’s detention requests is voluntary.

“What they’re hiding behind is ‘We don’t have a choice.’  But it's not true,” she said, asserting that Alameda County Sheriff Gregory J. Ahern did have the authority to release Ramos-Stierle.

For whatever reason, Pancho was released on Thursday afternoon.

Ramos-Stierle's  story is unique yet typical of the occupation movement. He was a doctoral student of astrophysics at U.C. Berkeley, until he discovered his work would be used to create “safer nuclear weapons.” He resigned from the program and has been active in community organizing ever since. He seeks to bring restorative justice to youth and supports the attempted “democratization” of the University of California. He was previously arrested while supporting families persecuted by Arizona’s infamous SB1070 law and is now involved in Free Farm, an urban garden that gives vegetables away to San Francisco city-dwellers.

Randall Amster is a longtime friend of Pancho’s and the director of the Peace and Justice Studies Association at Arizona’s Prescott College. He said that Pancho's arrest symbolized how he acts to make community change.

"He was meditating in a space that had been filled with violence and force and conflict," Amster said. "It seems he wanted to dramatize another story, to hold space peacefully. Those are the things that motivate him.”

On Thursday, a thread of emails bore witness to the respect Pancho has among organizers and friends. They quickly collected 8,000 petition signatures requesting his release. An onslaught of supporters contact Rep. Lee and the ICE offices. At one point, in Alameda County detention, Pancho was placed in a red jacket -- the color reserved for dangerous criminals -- and bound with metal shackles. That didn't last long. Nor did his incarceration. Pancho Ramos-Stierle is, in every sense of the phrase, a free man.

(Josh Wolf, an observer of the Bay Area Occupy movement featured Pancho in a video originally posted on Color Lines.)