Paul Krugman and the art of calling out a colleague 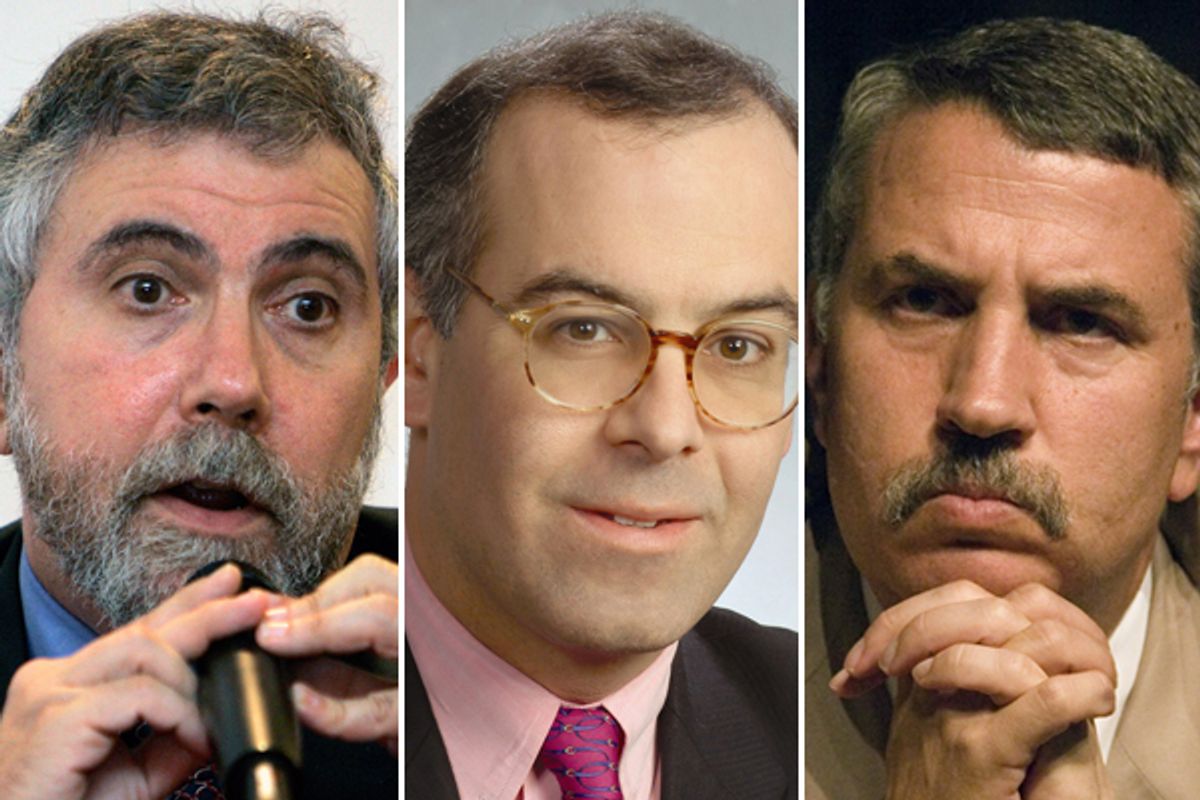 The New York Times opinion section, like the Senate, has this rule where you aren't allowed to call out a colleague by name when you think he or she is full of shit. As in the Senate, this rule is silly and anachronistic and enforces a strained phony cordiality at the expense of honesty. It doesn't ever stop Paul Krugman, though, who simply responds to his columnist peers' dumb arguments without ever referring to them by name.

For example: David Brooks, whose most annoying schtick is to write something that sounds reasonable until you realize what he's actually arguing (like, for example, "people often don't intervene when they see something horrible happening" is a very interesting point, unless your real point is that this is because of hippies and the terrible '60s), wrote earlier this month that American income equality is overstated, and that the real income gap worth examining is that between the college-educated upper middle class, who are doing well, and those with only a high school education, who have been left behind by our post-industrial economy. (In this case Brooks' "actual" point is that "Blue inequality" is merely the resentment of educated liberals who hate success while "Red states" have the real authentic American inequality.)

Anyone who has tracked this issue over time knows what I mean. Whenever growing income disparities threaten to come into focus, a reliable set of defenders tries to bring back the blur. Think tanks put out reports claiming that inequality isn’t really rising, or that it doesn’t matter. Pundits try to put a more benign face on the phenomenon, claiming that it’s not really the wealthy few versus the rest, it’s the educated versus the less educated.

So what you need to know is that all of these claims are basically attempts to obscure the stark reality: We have a society in which money is increasingly concentrated in the hands of a few people, and in which that concentration of income and wealth threatens to make us a democracy in name only.

Hah, I wonder who those "pundits" are, don't you? He went on:

In response, the usual suspects have rolled out some familiar arguments: the data are flawed (they aren’t); the rich are an ever-changing group (not so); and so on. The most popular argument right now seems, however, to be the claim that we may not be a middle-class society, but we’re still an upper-middle-class society, in which a broad class of highly educated workers, who have the skills to compete in the modern world, is doing very well.

It’s a nice story, and a lot less disturbing than the picture of a nation in which a much smaller group of rich people is becoming increasingly dominant. But it’s not true.

In today's New York Times, Krugman's column on the doomed supercommittee contains what I would characterize as a slightly off-topic tangent:

You see, admitting that one side is willing to make concessions, while the other isn’t, would tarnish one’s centrist credentials. And the result is that the G.O.P. pays no price for refusing to give an inch.

Here we are in America again on the eve of a major budgetary decision by yet another bipartisan “supercommittee,” and does anyone know what President Obama’s preferred outcome is? Exactly which taxes does he want raised, and which spending does he want cut? The president’s politics on this issue seems to be a bowl of poll-tested mush.

How funny, this sounds a lot like what Paul Krugman's unnamed idiot "centrist" pundit keeps saying.

To my knowledge, no one bothers to do this with Maureen Dowd columns, because she rarely makes arguments worth engaging with.