After her controversial predecessor, Kaya Henderson settles down D.C.'s troubled school system. Can she save it? 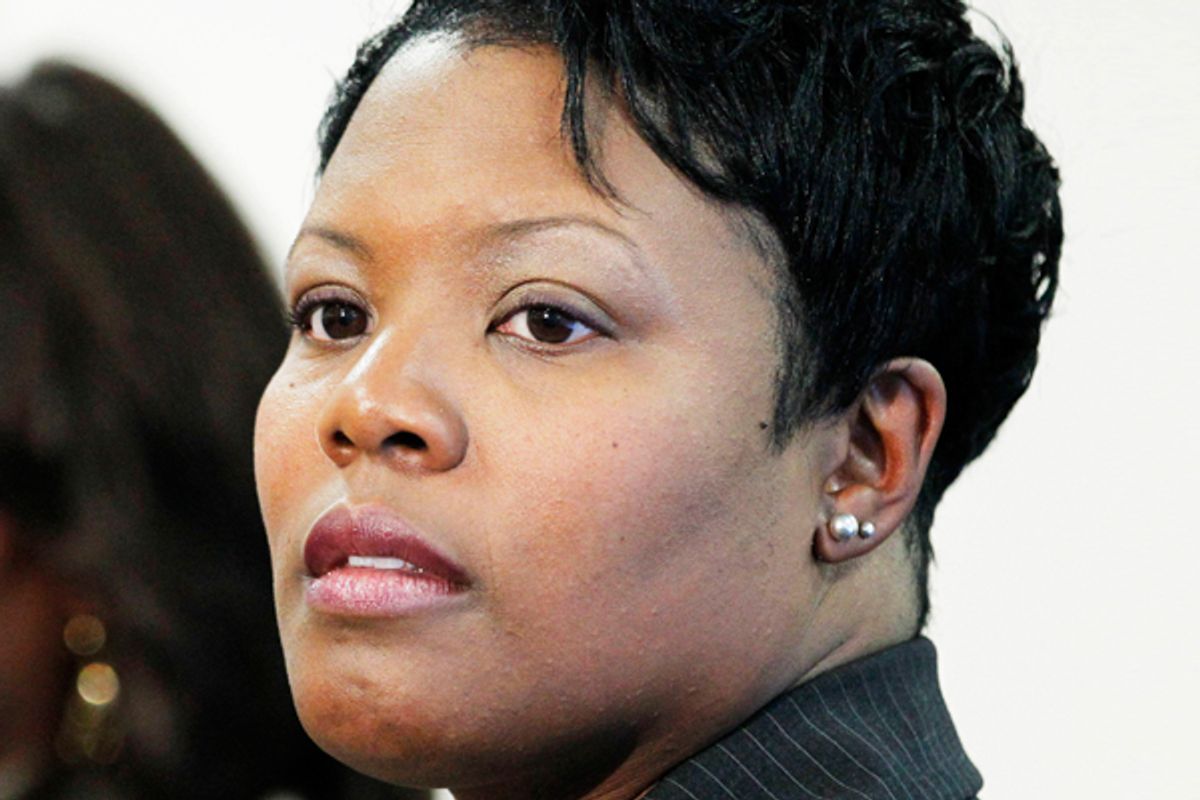 Earlier today, Gene Lyons discussed several of the problems with the education reform movement and came to a familiar conclusion: that education reformers like former Washington schools chancellor Michelle Rhee are ruining the public school system in the United States. He uses the current teacher assessment system in Tennessee, where districts are assessing kindgergarten through 3rd-grade teachers based on a 5th-grade teacher’s student test scores, as evidence that the reform agenda has gone horribly awry.

No doubt the situation Lyons refers to in Tennessee is evidence of a botched reform strategy. Yet in other areas of the country, some education reformers are working to improve school districts in ways that are both effective and increasingly popular with unions and the public. Quietly, and with little national attention thus far, recently appointed Washington, D.C., public schools chancellor Kaya Henderson is attempting to do just that: set a standard for a more nuanced, second-generation brand of education reform.

Henderson replaced Rhee as chancellor of D.C.'s public schools one year ago this month. Though her name might not be well known,  the  fate of education reformers around the country  just might rest on Henderson’s shoulders. Over the past year, Henderson has been finding out what school reform looks like in the wake of a bloody, district-wide overhaul. While reform hot spots like New York and Chicago wrestle with change, Washington is learning about politics and progress in a post-reform city. After the multi-year struggle with the D.C. teachers union that turned Rhee into a celebrity and District of Columbia Public Schools (DCPS) into a veritable war zone between 2007 and 2010, Washington has been focusing on the nuts and bolts of education, like standardizing its curriculum and improving low-performing schools.

And instead of Rhee, there’s Henderson, who took charge of the district mid-transformation and is working to keep it on the trajectory Rhee started. Henderson and Rhee have a long history; she had been working for Rhee for 11 years prior to Rhee’s departure from D.C. public schools and served as deputy chancellor while Rhee was at DCPS.

For those who champion urban education reform as a solution to all that ails public education in the United States, there’s more at stake now than there was when Rhee arrived at DCPS in the spring of 2007. Education reform is popular and hotly debated, but reformers have yet to prove that their strategies can revive a school district in a sustained, measurable way. Maintaining D.C.’s momentum and gaining the support of skeptical city residents poses a huge challenge for Henderson. She will have to do both if she wants the political clout to follow through on her reform agenda. Complicating matters further is the fact that, for the first time in 11 years, Rhee is not there to do the political dirty work.

Rhee and Henderson have similar backgrounds: Both taught through Teach for America, both worked at the New Teacher Project, a nonprofit Rhee founded, and both have almost identical ideas on education policy. Their public faces, however, couldn’t be more different. One could never imagine Rhee’s trademark scowl, the one she wore with a power suit on the cover of Time in November 2008, on Henderson’s cheery face.

Henderson, who worked with Teach for America in the Bronx after graduating from Georgetown University, then moved to D.C. to work for TFA, then for the New Teacher Project, is known to be affable and good at building relationships. Rhee, on the other hand, was known for how bad she was at building relationships with unions, teachers and most anyone who stood in the way of her ambitious plans.

Rhee was chancellor in D.C. for three years and four months, during which the city was a laboratory for ideas that reformers -- including President Obama and Education Secretary Arne Duncan, who was CEO of Chicago Public Schools at the time -- had never seen implemented on a district-wide scale. She worked fast: In her first year as chancellor she closed 21 under-enrolled or low-performing schools, expanded public preschools and special education programs, and fired 98 employees from the district central office who were deemed either unproductive or unnecessary. Between 2008 and 2010 the overhaul continued and Rhee notably created D.C.’s teacher evaluation system, which Henderson helped design. Rhee fired over 500 teachers for low performance during that time.

Rhee resigned from DCPS in November of 2010 after the city elected a new mayor, Vincent Gray, who had run on an anti-Rhee platform. Rhee moved on to found StudentsFirst, an advocacy organization that works to change teacher workforce policies. Gray nominated Henderson  as chancellor and she was confirmed last spring.

Henderson made two small but mighty choices during her first few months as chancellor that helped secure her as a leader and quell fears among many district parents that she might not be tough enough to fill Rhee’s shoes. She fired an unpopular private management firm that Rhee had hired to turn around a low-performing high school and she reassigned the principal of Hardy Middle School in Georgetown, whom Rhee had placed at the school a year earlier.

That decision had sparked a public relations debacle for Rhee when she allegedly ousted the principal because he wasn’t receptive to her plans for drawing more neighborhood students, who were predominantly upper-class and white, to attend the school, which had a predominantly black student body that came from other parts of the city to attend the well-performing school. Rhee has said that she was misunderstood in the situation.

“Henderson bought credibility by making very tough decisions by moving the principal at Hardy without creating the angst that Rhee created when putting that principal there in the first place,” said Rachel Lerman, a parent of twins at Oyster Adams charter school who has been involved with a variety of school organizations, charter and non-charter, in the district.

It was a twofer: The decision won Henderson credit and distanced her slightly from Rhee’s reputation as a chancellor obsessed with attracting middle- and upper-class white students into the system to the detriment of black students. Race will likely continue to be an issue as more and more white parents begin enrolling their children in Washington's public schools. Henderson has an advantage over Rhee because she is black and has a longer history with the city, but Henderson did cause a stir in September when she told a roomful of community members that the reason for the increase in white enrollment was “the promise of a good education.”

As for the teachers unions, the situation is somewhat diffused compared to the Rhee years. “It would be hard for her to do worse in getting along with teachers unions than Rhee,” said Jay Matthews, longtime education columnist for the Washington Post. “The level of confrontation -- the shouting and screaming -- is much better than before.”

As chancellor, Rhee's great white whale was a new teacher contract. Teacher tenure was (and arguably still is) the most taboo workforce policy for a reformer to meddle with in the school system. Rhee went after tenure with headline-making zeal, demanding a new contract that allowed her to fire teachers who were deemed ineffective and reward teachers who performed well with higher pay and large bonuses.

Henderson was essential to those negotiations, which lasted from the fall of 2007 to the spring of 2010, according to Matthews.

"Kaya was very careful to stay behind the scenes. She was the point person behind the contract and she was staying behind the union. She was working closely with the union, and with the arbitration,” Matthews said. The agreement that was eventually ratified by over 80 percent of the teachers union includes ending tenure and allowing DCPS to fire teachers who are repeatedly deemed ineffective, and higher pay and up to $25,000 bonuses for teachers who perform well at their jobs.

In the district, people see Henderson following Rhee’s old playbook as chancellor but often fail to recognize that Henderson was part-author of that playbook to begin with. This probably plays to Henderson’s advantage. As Rhee’s replacement, she has managed to differentiate herself from Rhee just enough to avoid the heat that would’ve come from being perceived as a second Rhee, while still capitalizing on the no-bullshit environment Rhee established while at DCPS. When Henderson fired 206 teachers because they had poor performance according to D.C.’s teacher evaluation system last July, for example, there was little controversy.

Test scores aside, enrollment is up for the third straight year at DCPS after a decade of decline and the most recent parents' survey showed that the percentage who feel that DCPS is “on the right track for student achievement” increased steadily between 2008 and 2011.

On the whole, the capital is sill one of the lowest-performing school districts in the country. One thing reformers and unions can agree on is that DCPS has a long way to go. The question they probably don’t agree on -- the question no one knows the answer to, but that Kaya Henderson is quietly, relentlessly answering -- is whether Henderson will be the one to complete the transformation of D.C. public schools.