Ann Patchett: Bookstores matter, so I'll pay to open one 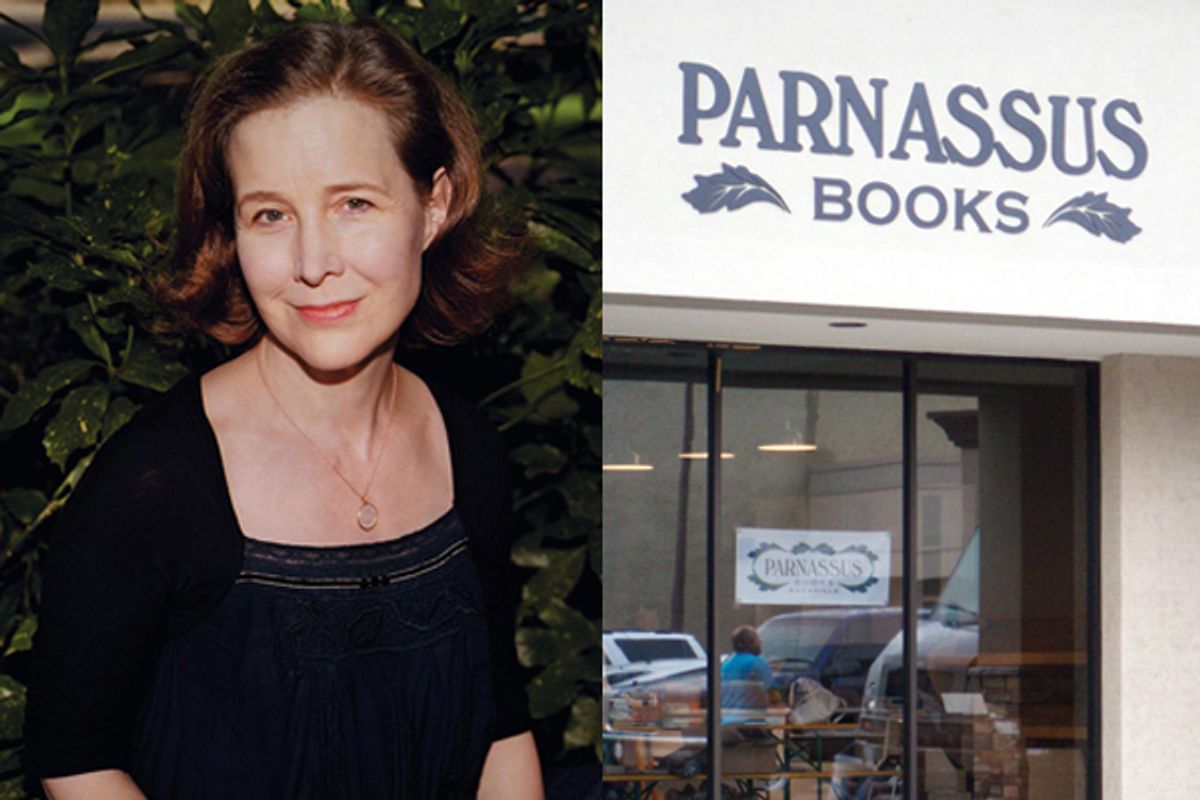 So far, 2011 has been a banner year for Ann Patchett. Her latest book, "State of Wonder," got the book world's version of a red-carpet rollout (and stellar reviews, to boot); and this week, she and her business partner, Karen Hayes, have launched an ambitious, much-buzzed project -- a new independent bookstore in the author's hometown of Nashville, Tenn.

Given recent news, you wouldn't be crazy to wonder whether launching a bookstore in 2011 is such a good idea. But a conversation with Patchett suggests that to her, Parnassus Books is less a make-or-break business risk than an investment in her community -- and a pulpit from which she can preach the gospel of the book.

Over the phone, the novelist described the development of Parnassus over the past few days, weeks and months -- and explained why the hundreds of thousands of dollars she's already poured into the project (and is prepared to lose) are already worth it, even if she's placed the wrong bet on the future of the book.

It's going very well. I had to go to New York on about three hours' notice to do the CBS "Early Show" yesterday, so it threw me off just a little bit. And then, if you're on NPR and the "Early Show" and in the New York Times, you come home and have 700 emails from cousins. Really, a lot of cousin email -- people I haven't heard from in a really, really long time -- and a lot of flowers and a lot of phone messages. It's beautiful, it's great -- but I have really good manners. I have to write thank you notes; I have to write all these people back. And that makes me want to cry.

You must be excited, though.

I am. But it's all very much like a really big wedding, where you're walking the line between excited and so overwhelmed that it wrings the joy out of it.

Have you had any real moment of panic in the past couple of weeks? Or has it been mostly smooth sailing?

Well, it's funny. You know, I have a partner, Karen Hayes, and she does all the work. That's the long and the short of it. I do all the media, the publicity, the check-writing; frankly, the stuff that's very easy for me, and the stuff that's hard for Karen. And Karen does the stuff that is not easy for her, but would be impossible for me. But we have great division of labor.

I was in the store the day before yesterday, doing an NPR segment -- and while I was doing that, I got the phone call that I had to go to New York. I said to Karen, "Why do I feel so nervous?" And she looked at me and she said, "Because it's your turn now." These last few weeks, when she's been doing all the work, and I've just been coming in for a few hours in the afternoon to shelve books -- I haven't been nervous at all, because it's really just not been my problem. And now it all is my problem!

Would you say the combination of a high-profile author and an experienced sales rep is a good one, as far as bookselling is concerned?

So you'd recommend this to other writers?

I would recommend this combination to anybody. And we had no idea -- we never sat down and said, "OK, this is going to be a really good combination for this reason." It was such a lovely stroke of fate.

You said something in the New York Times this week about not being interested in "retail" or "opening a bookstore." Do you see this as a sort of angel investment, rather than a business prospect? What would happen if you lost all the money you put into it?

You'd still feel it was worthwhile?

Oh, sure. Oh my God -- knowing what I know now, just in terms of the publicity, and the goodwill ... Even taking Parnassus and Nashville and that bookstore out of the picture. Just the fact that I have had the chance to be a spokesperson for books -- to stand up for all my friends across the country who are independent booksellers, the people who have supported my career for the last 20 years -- the fact that I can go on CBS and the front page of the Times and say, "Books are really important. Support your local bookstore." Unbelievable. It would be worth every dime just to do that. I would have written somebody a check just to do that.

Do you think Nashville had to suffer the kind of loss it did -- with two major bookstores closing down recently -- for you to get such a positive response to your new store? It sounds like you're getting a tremendous opening-week buzz -- but is this the kind of thing that can only grow out of the death of other, older institutions?

Yeah. Well, I don't know, because I haven't seen it play out another way. But there is this feeling of a redemption narrative -- we had our bookstores, and then we lost them. People have said to me, or to other people in the bookstore: "I feel guilty that the other bookstores closed. I should have been there more." Which is actually not true, because the two bookstores that closed were both profitable. They were not closed because they were not making money; they were closed at a corporate level, because the corporations -- Borders and Davis-Kidd -- were dying.

I think people have a real sense that those stores weren't great because they were so big. They also had impossible parking situations. Davis-Kidd moved into the mall 10 years ago; I hate the mall, and there was no way to just run in and get a book. The store was so huge, and the lighting was bad, and it was depressing. I started using Amazon. And when the store closed, I felt guilty. ("I should have circled the parking lot three more times until I found a space!") I think that we all -- myself included -- have this feeling of "If I had known then, I would have been better. And now I'm getting a second chance."

What would you say are your top three favorite independent bookstores around the country?

McLean & Eakin, in Petoskey, Mich., is just my favorite bookstore. And the people who run it, the Norcross family -- they're fantastic. I became very good friends with them just because I love the store so much.

Boswell Books in Milwaukee, which is owned by Daniel Goldin, is another one. There was a chain of stores in Milwaukee called Schwartz's -- I think there were five or six Schwartz stores. When Mr. Schwartz died, the stores split up and were closed -- and Daniel had been a manager at a Schwartz store for a long time, so he bought one. He's had his own store now for about two years. He was incredibly helpful; it's just different getting advice from somebody who has a store that's brand-new, as opposed to having a store for 10 or 15 or 20 years. He had more nuts-and-bolts advice.

Also Square Books, in Oxford, Miss. Richard Howorth is the father of us all. (He would smack me very hard if he heard me say that!) Square Books has three stores on the town square ... [Richard] became the mayor of Oxford -- and the joke was, he was already the mayor -- so why not just vote him in? He really is a tremendous leader for independent booksellers.

I could go on and on, but I would say those are my top three bookstores right now.

Why did you choose to set up a membership program for customers? Do you think that's a sensible business model?

Greenlight Books in Brooklyn did a similar program. And they have also been incredibly inspirational, because they -- again -- are the new kids on the block, and we're sort of following them in. Interestingly (and Karen would disagree with this, because she's so much thriftier than I am), to me, the choice [to go down this route] wasn't so much about the money. Because I can cover it -- I'm definitely in to pay for the whole thing. But [a membership program] gives people a sense of commitment, and ownership. I think it's psychologically a really good program, because if you make an investment -- if it's $75 or $5,000 -- in the store, you're probably going to be more likely to say, "I'm going to go Christmas shopping in Parnassus -- I'm not going to Amazon this time. I'm going to go back to my bookstore, because it's my bookstore." And we definitely, definitely want people to have that feeling.

What will your day-to-day involvement with the store be like? Will you be focused on this project for a while -- or will you need to get back to writing?

I'm writing a book of essays right now, which is the perfect project for this time, because it's a lot of compiling, and going back and rewriting and working from things I already have. It's something that's easy to pick up and put down. I would kill myself if I was writing a novel right now -- it would just break my heart.

I will be in the store a lot through Christmas. But I've been very clear from the get-go that, while it might be fun to have a novelist sell you a novel, it's not the best use of the novelist. I think that everybody in town understands that. I'm the springboard -- but I'm not the draw. People are not coming in because they really hope to see me; they're coming in because they want books. And they want to be there.

I will blog -- I can barely even bring myself to say the word; I am not an online, social media person! -- but there are so many things about this whole project that I never thought through or imagined in advance. The fun part for me is recommending books. Because I am an enormous, passionate reader -- and I really, really want to say to people, "This is the book you have to read." It's who I am. I do it to my friends all the time. The idea that I could take that burden off of my friends, and put it on a website, and then have a table in the store that says, "These are the books that Ann Patchett is recommending on the blog" -- that's paradise, for me.

So, I will do that; I will continue to do the media, and I will be in and out of the store. But I won't be living there.

You've said that the name of the store, Parnassus, is a reference to the mountain in Greece -- but have you ever read the Christopher Morley novels ("Parnassus on Wheels" and "The Haunted Bookshop"), which feature bookstores called Parnassus? Did you ever visit the bookstore called Parnassus on Manhattan's Upper West Side in the 1960s and '70s?

No. No, on all counts. Parnassus was completely and totally Karen's name -- and I didn't know anything about it. A name is not something that you can decide on democratically when there are two of you, and I thought, "You know, she's the one who's got to go to work there every day -- if she wants to go to work in a store called Parnassus, great!"

Titles are so funny. Your book grows into its title, and your store grows into its name. And your children grow into their names. Now that the store is open, people say, "Oh, Parnassus! That's so great!" Whereas before the store was open, people said, "What? What's it called? I can't remember that name!" So I think it'll be terrific -- or it already is.