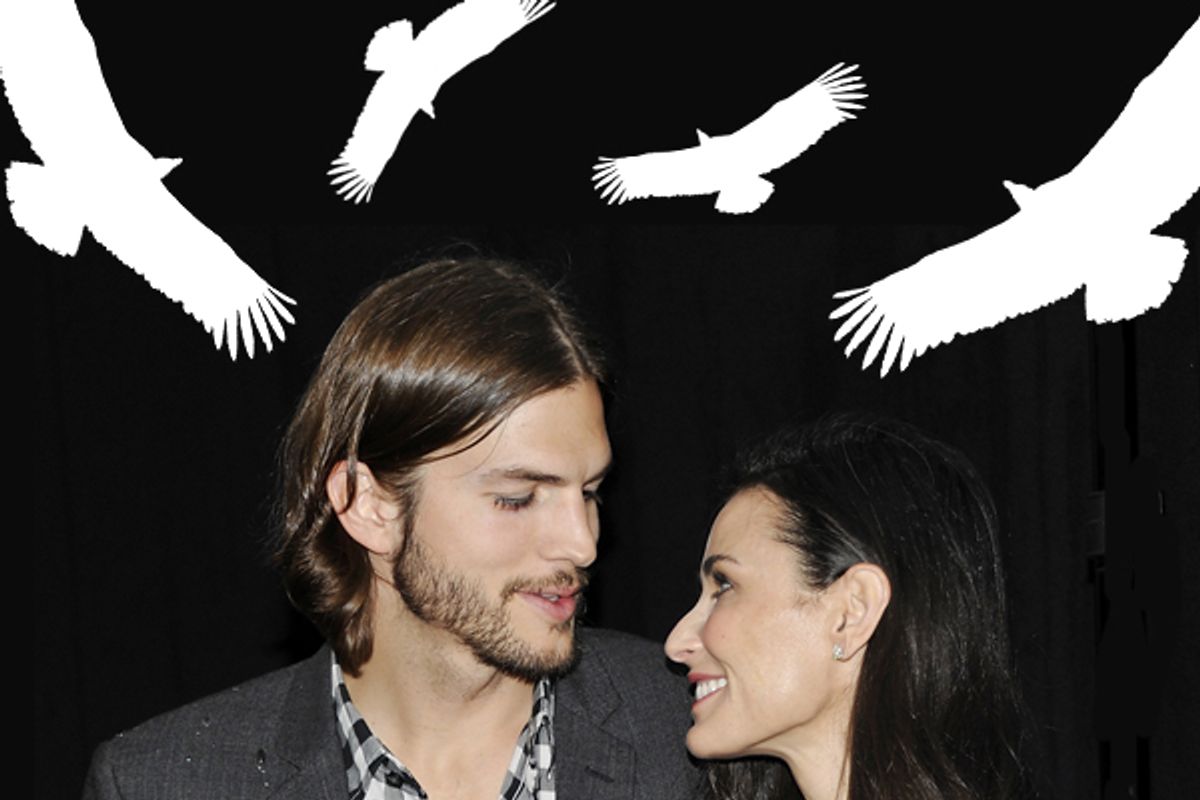 After Demi Moore announced her split from Ashton Kutcher, it took but a few minutes for the slap-dash press releases to begin rolling in. Publicity reps did not let civility, or embarrassing typos, stand in their way. One of the first to land in my inbox promised to connect me with "America's foremost" infidelity expert to talk "about ways that couples, even celebriries (sic), can 'recover' and ultimately save their marriage." (Even celebriries! And don't you love that "recover" is in quotes -- did their lawyer make them do that?) Of course they were in a rush to get the word out: A celebrity divorce can be quite a boon for business -- that is, if your area of business is the demise of romance, the splintering of relationships, the spoils of love's war.

When it comes to celebrity divorce, the ambulance-chasers aren't just lawyers keen on getting a cut of a fat settlement, it's also the experts who promise to help the general public deal with their own romantic breakdown or how to avoid a similar fate. Kim Kardashian was too flimsy a poster child for marital strife, what with the rumors that the whole thing was staged for reality TV, but Moore is just the unwilling spokesperson that relationship experts, divorce coaches and even financial advisors need to ply their trade, and ply they did. The P.R. push in the hours following her announcement was tasteless enough to catch the eye of several tweeters -- a group not exactly known for their rejection of shameless self-promotion -- who called out the indelicate tactic. Because, really, you're going to use someone's failed marriage to promote your tips for marital success, recovering from infidelity or coping with divorce?

But of course they are! It's unseemly and utterly predictable, all at once. Match.com relationship expert Kate Taylor weighs in on "what went wrong," pointing to the ongoing involvement of ex Bruce Willis in her and her kids' lives. Divorced parents who can maturely coexist around their kids? A father who lives up to his parental commitment? Tsk, tsk. She also fingers the age gap and the disparity in income and fame, invoking the hoary maxim, "Who wears the trousers?" If only Demi had been a little less successful! (Take note, ladies.)

So-called experts on "cougar dating" are getting in on the action too by offering "some 'musts to avoid' that can help both you and Demi when dealing with a younger man." WhatsYourPrice.com, a site that lets people literally buy and sell dates, issued a press release reminding everybody that it totally predicted the couple's split, based on a survey it conducted of cougar-cub dates among its users. The headline: "Scientific Reason for the Ashton and Demi Breakup."

If you've already failed to follow the advice of such sage experts, there is always post-divorce support. The press release about "celebriries" that I mentioned earlier advertised a message board support group and online courses meant to help you through divorce. Another email from a site making similar promises began, "First it was Kim Kardashian and now it's Ashton and Demi. Unfortunate as it is, divorce is once AGAIN rearing its ugly head." Surely, though, this can't be a surprise to "the leading authorities on marriage and divorce in the country" -- they must be aware of the high divorce rate, right? (And that's probably why they offer an array of divorce boot camps and getaways.)

It might actually be reassuring that there are so many people out there with answers, if they weren't all offering different advice. You need only look at the sprawling relationship advice section of your local bookstore to confirm that no one has discovered the one-size-fits-all guide to lasting relationships. But these experts are catering to a real desire for comfort and reassurance. High-profile divorces and cheating scandals tap into common insecurities: If a woman like Demi can't keep her man from straying, can I? If two people with such pretty, perfect lives can't make it work, can we?

Since everyone seems to be dispensing relationship advice, you might as well consider the recommendation of this never-married 27-year-old: Don't trust anyone who says he or she has the secret to marriage.