The face of police cruelty 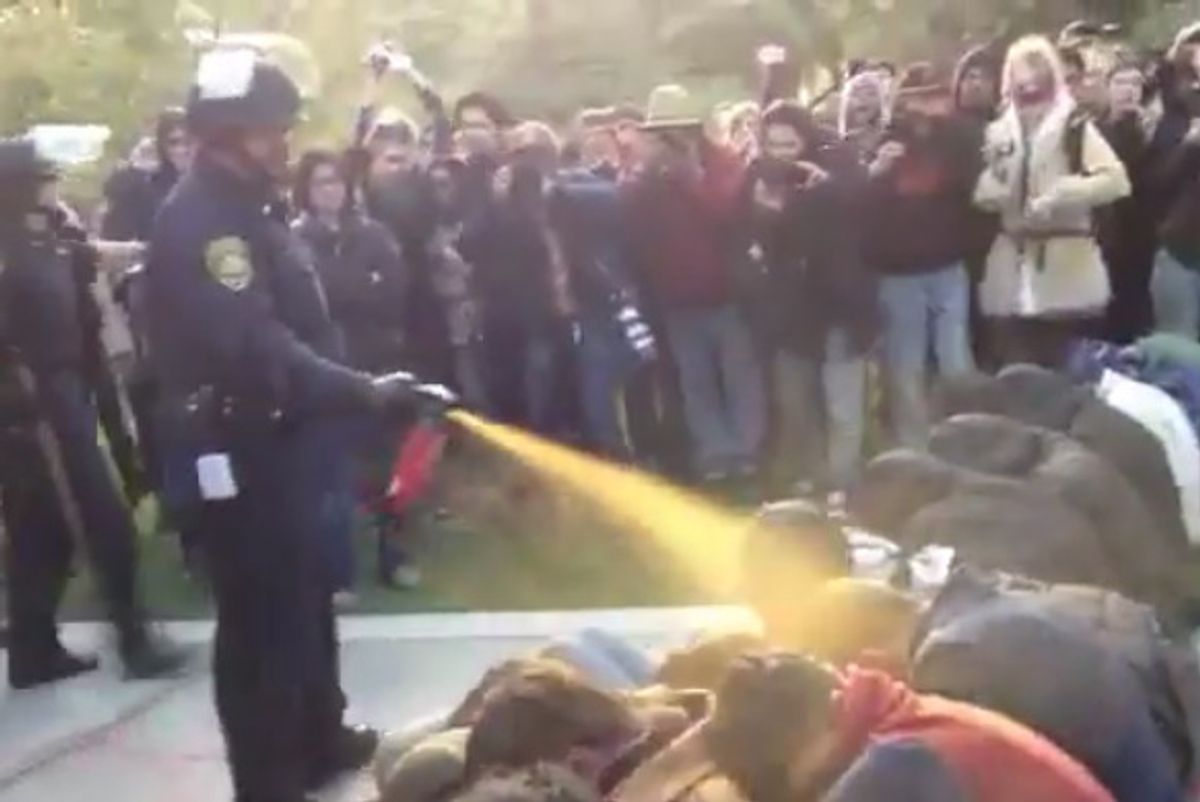 I've seen so many shocking photos and videos of police brutality against Occupy Wall Street protesters and their far-flung supporters around the country. But there's something about this now-viral video, of a UC Davis police officer casually and cruelly pepper-spraying a line of non-violent protesters, and the way the students responded, that symbolizes both what the movement is up against – and how it ultimately wins. It's below. Be sure to watch the whole thing, because as sickening as it is to see the red pepper-spray hit students directly in their faces, it's as inspiring to see how they react, and how it ends – at least for now. The Davis Enterprise identifies the officer as Lt. John Pike.

My Occupy Oakland article this week got a lot of response, pro and con, for which I am grateful. It inspired a thoughtful post from occupier L.E. Long on the blog zunguzungu. Long makes one point I want to acknowledge, but also clarify my thoughts about it. Defending Occupy Oakland's preference for a "diversity of tactics" and its refusal to condemn violence or vandalism, Long sees confusion about what constitutes "non-violence." When UC Berkeley students locked arms to non-violently resist arrest November 9, Chancellor Robert Birgenau defended the campus cops' brutal reaction by terming the students' arm-locking "not non-violent." Birgenau's preposterous reply tells Long that the concept of "non-violence," for which I stated my absolute bias, isn't as clear-cut as I'd like to make it.

I'd reply that just because Birgenau misunderstands or deliberately misrepresents the history of non-violent resistance, that doesn't mean we have to share his confusion. When Rosa Parks refused to move to the back of that Montgomery, Ala. bus in 1955, and got arrested, that was clearly non-violent resistance. Likewise when young African Americans "occupied" lunch counters in the South and got arrested. Going limp might make arrest harder, but it's still non-violence. Locking arms may make it harder still; it's still non-violence. We shouldn't give people who are willfully misrepresenting the history of non-violent movements the power to define what we do today.

What the UC Davis protesters did Friday was non-violent. What the cops did in response was brutality. The video is very hard to watch. But if you watch the whole thing, you'll see the remaining students begin to chant "Shame on you!" and slowly move toward the police. And you'll see the cops begin to retreat, maybe because their work is done, but maybe because they're feeling the moral and political power of that non-violent crowd. Some of the cops really do look ashamed, including Pike himself (in my opinion; you might see it differently.)

This is how we win. Imagine how different it would look if some self-appointed "revolutionary" decided it was time for a "diversity of tactics" that included violence in Davis on Friday.