The homeless: Pawns in the war on OWS? 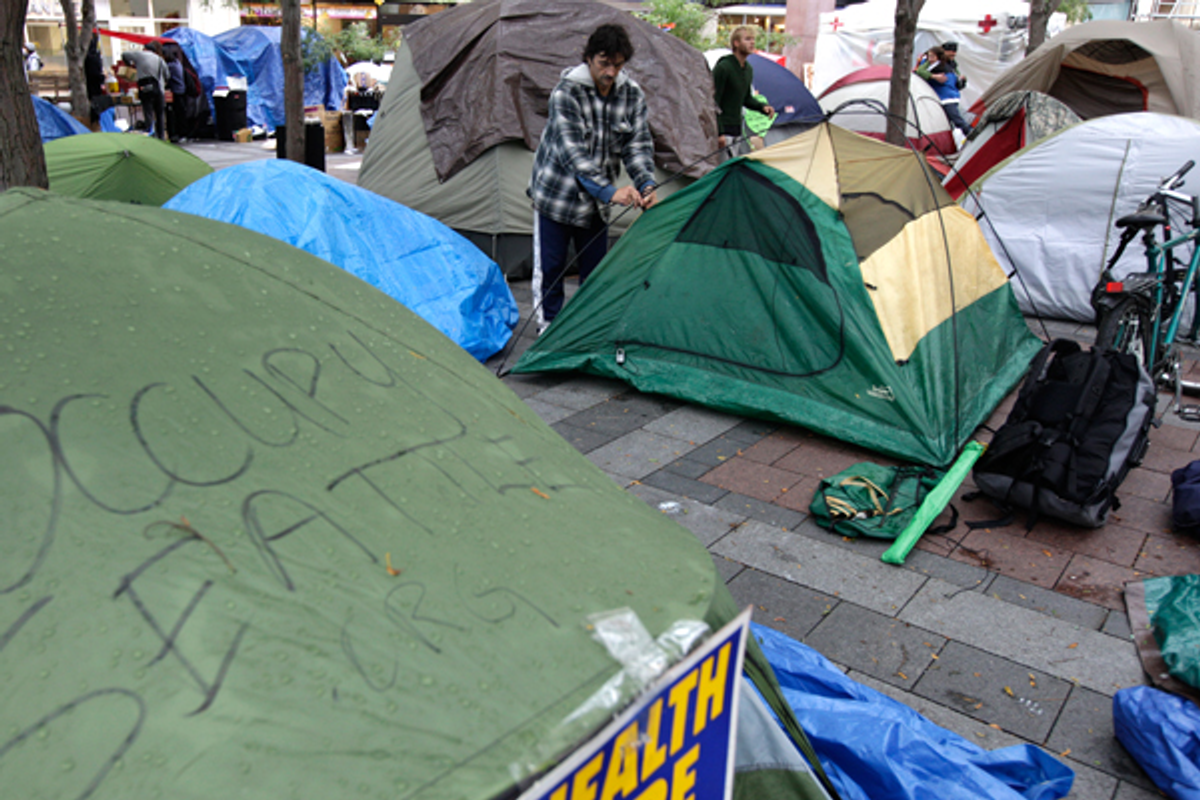 Beneath the veneer of New Orleans’ vibrant culture lies a history of tragedy. From the yellow fever outbreaks of the 19th century, the many catastrophic storms that have visited the city, the violence of the Civil War and Reconstruction, to the vast social dysfunction of contemporary New Orleans, this is a city that has known adversity throughout. It is sadly fitting, then, that Occupy NOLA is one of the few occupations to have witnessed a death at the encampment. Last week, 53-year-old Ronald Dean Howell, known as “Curly” or “Old School” to friends, was found dead in his tent. The coroner’s chief investigator, John Gagliano, stated that the cause of death was “complications from alcohol abuse.” According to other occupiers, the man was homeless, and likely relocated from another tent city at Calliope Street and the Pontchartrain Expressway, which was closed by authorities on Oct. 27.

Occupiers throughout the country have naturally found themselves sharing space with local homeless populations: the most vulnerable and marginalized of the 99 percent. This has been particularly pronounced in New Orleans, which continues to struggle with an acute homeless problem stemming from the devastation of the city’s housing stock during Hurricane Katrina. According to data provided by UNITY of Greater New Orleans, the city’s largest homeless nonprofit coalition, the homeless rate remains 70 percent higher than prestorm levels, with nearly 10,000 people lacking some form of permanent shelter. Many of these suffer from serious mental and physical illnesses, including high levels of alcohol and drug abuse. Howell’s story is typical, and his death would probably have gone largely unnoticed had it not occurred in the midst of this burgeoning movement. Instead, his passing has served to illuminate the systemic problem of homelessness in New Orleans, while also raising suspicions about the city’s motivation in closing down his previous home on Calliope Street.

In post-Katrina New Orleans, affordable housing has become a serious issue. In the immediate aftermath of the storm, four of the most recognized public housing sites were demolished: Lafitte, St. Bernard, B.W. Cooper and C.J. Peete. This came on the heels of contentious debate in the city council, which voted unanimously in favor of the demolition despite vocal opposition from community members. According to the Housing Authority of New Orleans (HANO), these units were replaced by mixed income housing, each managed by various private developers.

Meanwhile, the general housing stock was devastated by the storm. According to HUD, 75,000 units were destroyed, and 45,000 remain abandoned today. The diminished supply has naturally resulted in increased rents across the board. In the same HUD report, the median cost of housing in New Orleans increased 33.2 percent, from $662 in 2004 to $882 in 2009 (adjusted for inflation). Meanwhile, the rate for the most affordable housing has risen dramatically. According to Linda Gonzalez, the Director of New Orleans Mission, a nonprofit providing services for the homeless, “basic apartments cost about $250 before the storm and are now up to $500 to $700 depending on what area of the city.” This is confirmed by data from the HUD report that shows the number of units available in the $300-600 range has fallen from 66,300 in 2004 to 19,300 in 2009. Affordable rents have greatly dissipated in the city, while wages have stagnated as part of the larger, national trend. In response to the HUD report, UNITY Executive Director Martha Kegel was then quoted as saying: “We have more unaffordable rent than even New York City. That’s because we have very high rent and we have very, very low income.”

As such, the homeless population has grown so rapidly that “tent cities” have become a relatively common occurrence. The Occupy NOLA encampment, located at Duncan Plaza, is not the first of its kind. In 2007, a homeless camp took shape in the same location, eventually growing to include 249 individuals, according to UNITY. That encampment was ultimately closed by the city, beginning Nov. 21 of that year. Then-Mayor Ray Nagin’s administration worked with the nonprofit community, including UNITY, to relocate these people to a mixture of hotels or apartments. A similar encampment at Claiborne and Canal with about 150 individuals was broken up in similar fashion the following July. In both cases, the nonprofit community was provided prior notice and allowed to make assessments of the physical and mental health of people at the encampment.

The most recent closure, however, has diverted from this practice. While City Hall spokesman Ryan Berni stated that all of the “usual groups were included in the process,” some relevant organizations say they were not involved. Linda Gonzales, director of New Orleans Mission, which is just across the street from the Calliope encampment, says she was not given any prior notification. When asked if this was unusual, she replied “Yes. They typically call and let us know when they are going to do a sweep. I guess they just didn’t need us.” Meanwhile, Mike Miller, lead outreach worker at UNITY, said “We weren’t involved with the Calliope closing, and the plans did not meet our standards for humanitarian enclosures.” He says they were only given a few days’ notice, and that the city actually fenced off the camp a day prior to the announced closure date.

Miller further explained that his team was unable to make appropriate evaluations prior to the closing. “We knew it was coming. Were we given a specific date? No. We were not given an opportunity to assess the physical and mental health of the individuals at the encampment.” When asked about the city’s claim that the vast majority of the population was provided some form of temporary or permanent housing, he responded “Whatever their numbers are, I take it with a grain of salt. I don’t believe it because we are dealing with the same faces.” He emphasized that the city was essentially just “rearranging the problem” rather than solving it. “By shifting people around, you lose people: the sickest of the sick.”

Given the city’s diversion from the norm in closing this camp, some Occupy protesters have grown suspicious that the city maliciously intended to use the homeless as pawns to help destabilize their movement. Nia, who is integrally involved with the movement, said: “It would be utterly ridiculous to not think of the possibility that this was done with that intent.” While she emphasized that the group has welcomed the homeless population to the camp, she also explained that much of the group’s organizing capacity has been exhausted by attempting to meet their needs: providing food and tents, dealing with security issues, and trying to integrate them into the movement. Furthermore, she points to a potentially coordinated effort of authorities throughout the country to destabilize these movements by displacing homeless communities to the Occupy encampments. She said: “People have been coming here from throughout the country saying they have had the same exact experience with long term homeless (in their occupations).”

City officials, meanwhile, deny such machinations. When asked why the Calliope encampment was closed, mayor’s office spokesman Berni said: “Anytime there is a large encampment, there is a risk to public health and safety. What we did underneath the expressway was a lengthy process, in ensuring the necessary housing and vouchers to help people get back on their feet.” When asked if he thought that anyone from the Calliope encampment may have relocated to Occupy NOLA at Duncan Plaza, he was willing to admit that “some people” probably did.

However, the scene at the camp suggests the effect was probably more pronounced. What began as a few dozen people has grown to over 100 permanent campers, the vast majority of whom are homeless. On the increase in homeless numbers since the Calliope closure, Nia said: “There was an immediate slight increase. Then, a bunch of people were given hotel vouchers, which was fine, until they ran out and they came here.” Another Occupy NOLA organizer, Dehlia Labarre, corroborated the hotel voucher story, saying “We have reports of a number of people who were given a week-long voucher and then ended up here when it expired.” Berni, meanwhile, denied any knowledge about expired vouchers.

Adding to peoples’ suspicions has been the overly compliant nature of the New Orleans Police Department (NOPD) with regards to the encampment. Only one arrest has been made thus far at the site, and that was of a “machete wielding transient” that NOPD public information officer Frank Robertson said “had nothing to do with Occupy NOLA.” He explained that there have been no further reports of violence or noise complaints. When asked if they have any plans to close it down, he refused comment. However, he did admit that the police have “undercover officers in the area of the camp.” This rather surprising admission suggests that the NOPD may be focused on covert means of destabilizing the movement, rather than facing the scrutiny that would come with overt confrontation a la New York, Chicago and Oakland.

Evidence seems to point to intent by the city to diminish Occupy NOLA. If authorities were genuinely interested in protecting protesters' First Amendment rights as Berni claims, would the NOPD be deploying undercover patrols? Meanwhile, the concurrent closing of the Calliope camp is suspicious, given the break from past trends and discrepancies in reports from the city and homeless nonprofits. Furthermore, the city’s claim that most of the homeless at that camp were provided alternate housing is contradicted by the reality on the ground at Occupy NOLA, where dozens of tents have sprouted up since that closing.

Malicious intent or not, the reality is that authorities have failed to address the underlying issue of inequality at all levels of government. Decades of conservative orthodoxy, attacks on the social safety net, stagnant wages, and rising education and housing costs have culminated in a level of precariousness unseen in decades. It is hard to envision a more appropriate illustration of this than frustrated youth occupying public space together with the most marginalized members of the population in the “city that care forgot.” While the death of Ronald Dean Howell was probably unavoidable, the tragedy of poverty and homeless can be conquered. By refocusing debate on the needs of the marginalized majority, the Occupy movement has taken a significant step forward in this continued struggle.

Matt Reichel is a writer currently living in New Orleans. Respond to him at: mereichel@gmail.com.