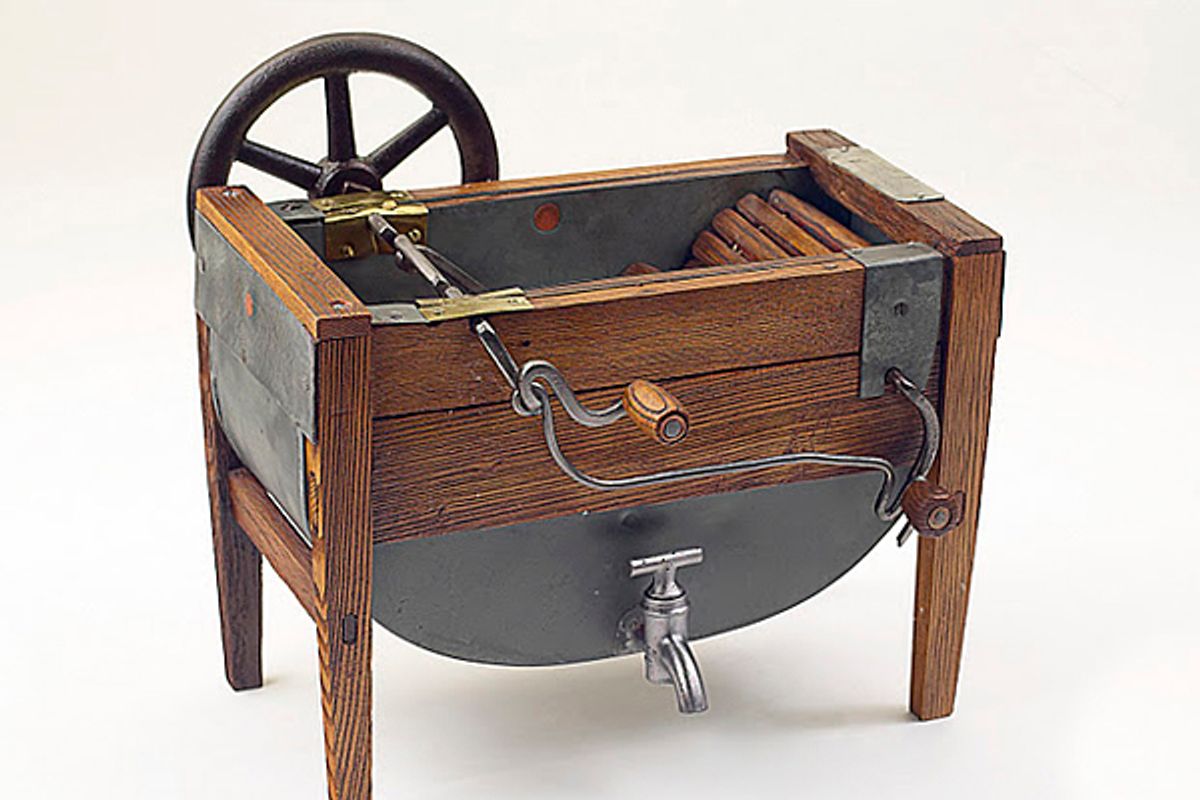 Visitors to the Smithsonian American Art Museum's new exhibition, "Building a Better Mousetrap," will see a version of a popular 19th-century tourist experience that is fittingly diminutive.

Visitors to the nation's capital were once able to stroll through the halls of the Patent Office, oohing and aahing over the tiny models inventors were required to submit as part of their patent applications. While the vast majority of these models -- which at one point numbered in the hundreds of thousands -- have since been destroyed in fires or otherwise lost to history, a small portion remains. An even smaller selection (32 in all) will be on display in Washington through November 2013.

Over the phone, curator and American decorative arts specialist Charles Robertson described the collection and its history; an edited transcript of our conversation is below. Click through the accompanying slide show for a peek at the patents of the past.

Can you give a brief history of these objects? I believe they were made starting in the 1790s -- right? And it was a practice exclusive to America?

Yes. The first patent law was passed by Congress in 1790; it required the submission of a drawing, a description (which was called a specification) and a model. The United States was the only country that required the model. England and France and Germany didn't; they had the technical engineering and scientific expertise to evaluate models on the basis of the drawing and description alone. But, hey, in 1790, the United States was pretty lacking in that area of expertise, so the model was necessary in order to give some idea of how the invention would work.

The model was not only required to be submitted, but also to be put on public display -- so eventually, these grand galleries were designed on the top floor of the patent office building, specifically for the display of the patent models. By 1880, when the requirement for submitting a model was discontinued, there were some 200,000 patent models in the building, on public display. They are unique American historical artifacts of technology, invention and craftsmanship.

Who made the actual models? Would an inventor have to pay an artisan to make one of these?

In the early days, the inventor himself probably made them because the procedure was cumbersome; it was revised in 1836. Before then, there was really not even a patent clerk; the application for patent was submitted to the secretary of state -- who was Thomas Jefferson at the time, of course, and he knew something about inventions -- and reviewed by him and the attorney general. The president actually personally had to sign the letters patent, as they were called.

And he stopped signing those in 1836?

Yes. That's when the law was radically revised. At that time, professional patent examiners, who eventually did have the scientific training and the specialization to review the patents and grant them, were established.

When these were put on public display, were they viewed as curiosities? Or art? Were they a tourist attraction?

They were a tourist attraction. [There was a] huge fire in 1836, actually, when the patent office was in what's called Blodgett's Hotel, which is at the corner of E and Seventh streets -- and that destroyed literally all the patent models, paperwork and everything. Completely destroyed. Officials actually wrote to the inventors asking them to remake and resubmit their models and the descriptions and everything. They got about 2,800 back, but many, many thousands were lost.

There were many [other] curiosities in the building, like the original of the Declaration of Independence, all kinds of treaties, Benjamin Franklin's printing press, etc. About 100,000 people [a year] came to the patent office in the mid-1850s to view the patent models and these other curiosities. There was kind of a fervor of invention; everybody wanted to patent something and make a fortune. But most of the inventions were never commercially produced -- and many were improvements on earlier inventions -- like the sewing machine model we have in the exhibition.

Did they charge an admission fee?

No, no. It was absolutely free; anybody could come in and see them. And there was a finder's guide for finding them by subject matter in these vast cases (they were nine feet high on two levels -- actually, three levels, in one gallery -- so it was really, really awesome).

Lastly, what happened to these items in the course of the 20th century? How did they eventually make it into the hands of Alan Rothschild, who owns them today?

The first two floors of the Patent Office Building were largely offices occupied by the Interior Department. The Interior Department grew and grew, and when the models were finally discontinued, these huge spaces were converted into offices; by the end of the century, all the patent models were put in storage. Then, in 1924, there was a congressional investigation -- Why are we paying so much money to store all these patent models? -- and they were sold at auction. Some were returned to the families of the inventors; any museum that wanted them could take them; and the rest were sold at auction. One man bought a lot of them and was going to establish a patent model museum in New York City -- but that never happened. Gradually, they were dispersed, by auction, by sale, various things. [Eventually,] Alan Rothschild bought 4,000 patent models [and brought them back to] Cazenovia, N.Y. Thirty-two models from his collection are in this exhibition.

"Inventing a Better Mousetrap: Patent Models from the Rothschild Collection" will be on display through Nov. 3, 2013, at the Smithsonian American Art Museum in Washington, D.C.