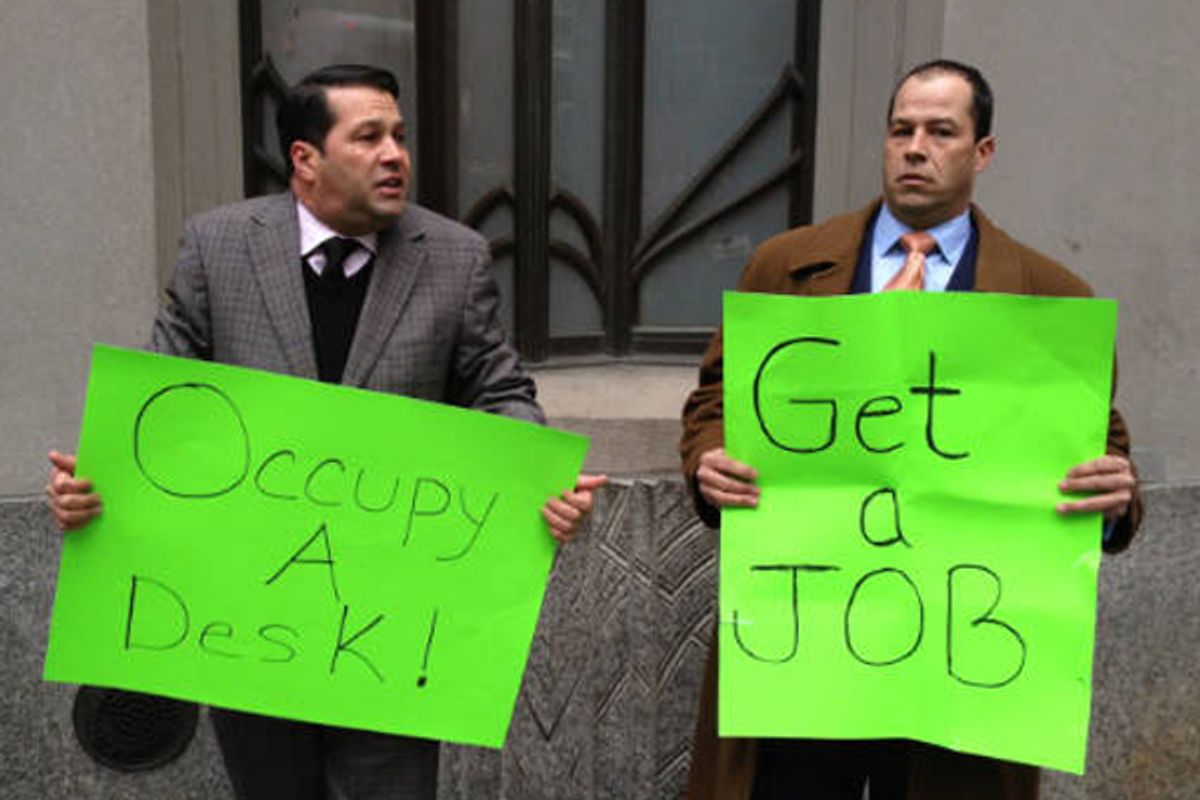 The self-appointed defender of Wall Street who demanded in a counter-protest last week that OWS demonstrators "Occupy a Desk" has been barred from the securities industry since he was sanctioned for misconduct in the late 1990s.

John Tabacco and his brother Derek got massive press attention when they showed up at the big protest Thursday with anti-Occupy signs and posed for the news cameras, deriding the protesters as "animals" and demanding they leave Wall Street. They declared the launch of the "Wall Street Freedom Fighters" movement and were immediately embraced by Fox News.

As I reported Friday, John Tabacco has a long and strange history of publicity-seeking, including involvement in second-tier reality TV programs, a failed talk radio show on Staten Island, and a pair of abortive political campaigns. Now we can add another wrinkle to Tabacco's story: Working as a broker in New York in the 1990s, Tabacco was barred from the industry, fined $50,000, and ordered to pay $20,000 in restitution after a misconduct incident, according to Financial Industry Regulatory Authority (FINRA) records.

FINRA is not a government agency; it is the industry's own regulatory authority.

At the time Tabacco was working for the Staten Island-based First Hanover Securities. A complaint was filed alleging that Tabacco "executed ... 11 transactions in 3 unrelated customer accounts without the prior knowledge, authorization or consent of the respective customers."

The National Association of Securities Dealers (NASD) -- FINRA's predecessor -- ordered in February 1997 that Tabacco be "barred from association with any NASD member in any capacity," according to records.

"We feel like that issue is aged and gone," Tabacco told me Monday morning, noting that he did not need to be a registered broker to run his current business, LocateStock.com, which provides tools for short-selling. He also argued that the sanction was an example of "government over-regulation" since small brokers are targeted by regulators while CEOs accused of wrongdoing are given golden parachutes.

As a strange side note to all this, First Hanover Securites has a cameo in an indictment of reputed mobster John A. Gotti; Tabacco once interviewed Gotti's sister Victoria, as well as other people in the mob world.

Tabacco insists that his "Wall Street Freedom Fighters" project is trying to have a dialogue with Occupy Wall Street, not fight it. Tabacco's Twitter account announced Monday morning plans for a "Get a job fair" at Zuccotti Park.

UPDATE 11/22/11: I've obtained the full case file from the action against Tabacco in the 1990s, which is below. Here's a sample quote from Tabacco's interview with investigators: "Maybe I used some sales techniques that I shouldn't have to convince the guy to buy 25,000 shares of a speculative security."

The investigators concluded: "We find that Respondent Tabacco's actions in this matter were completely outrageous and that his contradictory statements were utterly disgraceful."