"Bored to Death" keeps itself amused

In just three seasons, the HBO series has evolved from a gentle comedy to a madcap satirical farce 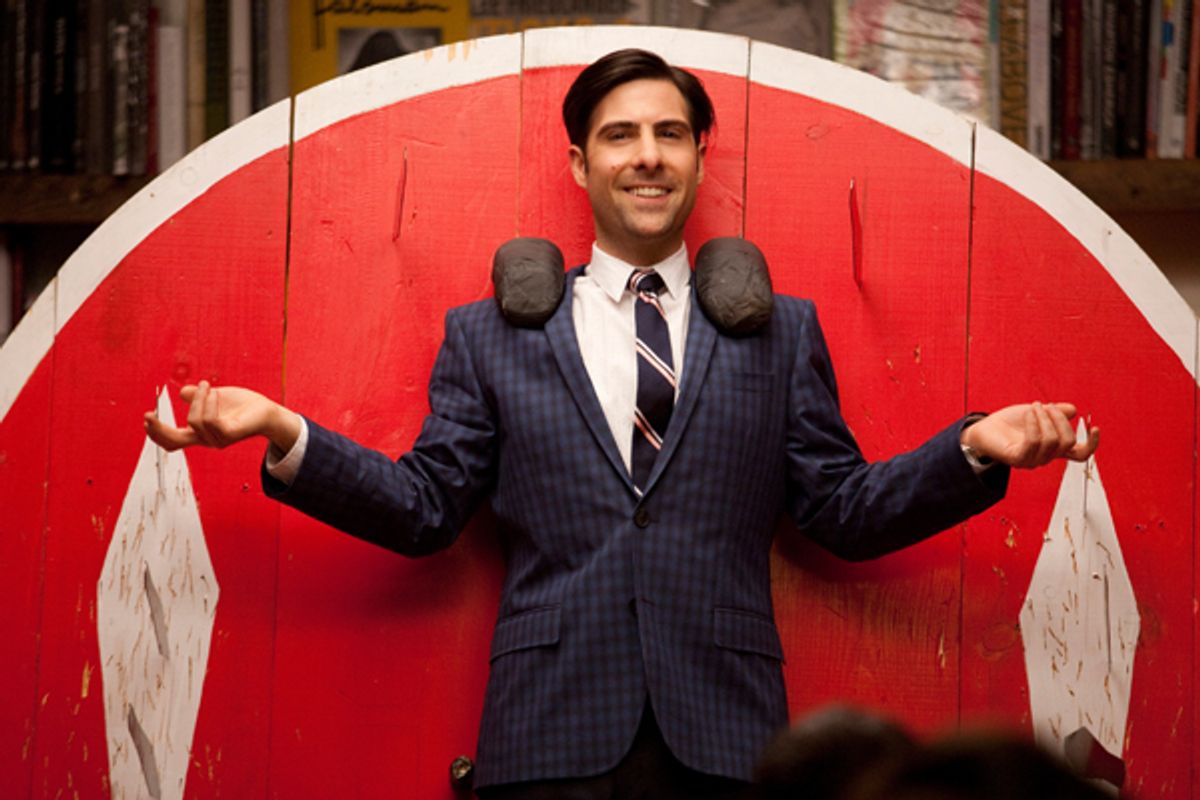 I recently re-watched the first season of HBO's "Bored to Death" (Mondays 9 p.m./8 central) -- created by novelist and newspaper columnist Jonathan Ames -- and was struck by how much it has changed. Between 2009 and now, the show's point-of-view has stayed more or less the same, but the tone, pace and emphases are different. The pilot, which showed Ames' self-named, white-wine-guzzling pothead hero (Jason Schwartzman) getting dumped by his girlfriend and offering himself on Craigslist as a private eye, felt like a solid early '90s New York indie film about relationships with a spoofy Raymond Chandler subplot grafted on. Pretending to be a detective let Jonathan behave with a brisk decisiveness that he lacked elsewhere in his life, and gave the writers license to satirize certain New York types: the soft young writer, the snooty book critic, the casually polyamorous single woman, the vain, out-of-it editors who epitomize what's left of the magazine and book business.

Once or twice an episode, the series would shift into farce mode and Jonathan would get into a chase or a scuffle and flail about like Kermit the Frog losing his composure. Other times, there would be a contrived situation wherein he or some other main character would get physically humiliated, such as the three-tiered grudge boxing match that ended season one. (Before unleashing a devastating punch to a critic's face, Jonathan snarled, "The New York Times said my prose was 'lucid!'") But in its heart, "Bored to Death" was mainly a character study focused on Jonathan and his best friends, the comic book artist and stay-and-home dad Ray Heuston (Zach Galfanakis) and the silver-haired, pot-smoking, Viagra-popping ladies' man George Christopher (Ted Danson).

The show has shifted quite a bit since then; its core is still the friendship between Jonathan, Ray and Christopher, but it's much more of a weekly madcap farce. I don't bring this up to condemn "Bored" for losing touch with its early interests -- I still love it, and it probably generates more belly laughs now than it did early on -- but merely to note the change. TV series have to evolve to keep us (and themselves) engaged, and this recent season is a different animal than the one that stumbled across our screens in a haze of ganja smoke two years ago. I'm reminded of "Seinfeld," which started out as more of a rooted-in-reality, "Didja notice" sitcom, then turned into kind of series in which the hero mugged an old woman for a loaf of marble rye and his best friend's fiancee died from licking a poisoned stamp, and ultimately ended with the major characters being tried for their selfishness and locked in a purgatorial jail cell.

While the most recent season of "Bored" hasn't delivered too many of the melancholy interludes and sweet character moments that distinguished season one -- except for George's recent, pot-addled performance of "To Dream the Impossible Dream" from "Man of La Mancha," which made the show's undertone of Don Quixote wistfulness official -- it has compensated with knives-out jokes at the expense of comfy big city liberals who have no clue how good they've got it. These characters are affected by the economy -- particularly George, who in season two had to sell his magazine and give up his column at the behest of his new bosses -- but not so adversely that they have to give up decadent dinners and spur-of-the-moment taxi rides from midtown Manhattan to Brooklyn. Some of the throwaway lines have touch of "Sopranos" or Todd Solondz social critique. I grin whenever I remember Ray's girlfriend Leah (Heather Burns) telling him, "I should have been working, but I Googled you and I started getting hot," or George's archrival, GQ publisher and restaurateur Richard Antrem (Oliver Platt), telling patrons on opening night, "As you know, we promote only truly local fare grown by vegans and conscientious objectors." None of these characters seem to know how ludicrous they are -- except maybe George, whose disarming smile and silver fox gentility remind me of George Plimpton.

Meanwhile, the show's increasingly nutty hijinks tie it to silent films, Bob Hope gagfests and early Woody Allen pictures. This year we saw Jonathan dangle from the face of his apartment building's clock tower a la Harold Lloyd in "Safety Last," and take part in a supermarket chase with George and Louis that had a "Raising Arizona" feel. "Bored" is no longer set in a faintly "real" world populated by people who sometimes indulge in detective-fiction delusions. It now takes place in an alternate universe that's like a boozy neo-noir populated by "Talk of the Town" types embroiled in full-on farcical madness and "Dream On" sexual misadventures.  Another episode found Jonathan, George's daughter and a detective impersonating Jonathan spying on a three-way tryst involving a woman and two men wearing plush animal costumes. Last week's episode, which I won't describe in detail in case you haven't been keeping up, took the show into TV mythology territory, injecting a bit of "Chinatown"-style psychosexual distress and hiring Stacy Keach, the once and future Mike Hammer, to deliver the bad news. At a couple of points this season I would not have been surprised to see "Moonlighting" characters David Addison (Bruce Willis) and Maddie Hayes (Cybill Shepherd) try to poach a case from Jonathan; like that show, "Bored" seems to be set in an "anything goes" universe that both mocks and indulges detective and noir cliches, and teeters on the brink of too-cuteness yet rarely tips over.

Clip - There's Been a Miracle