When my husband graduated high school, I hadn't been born yet. Do people think that's creepy? And should I care? 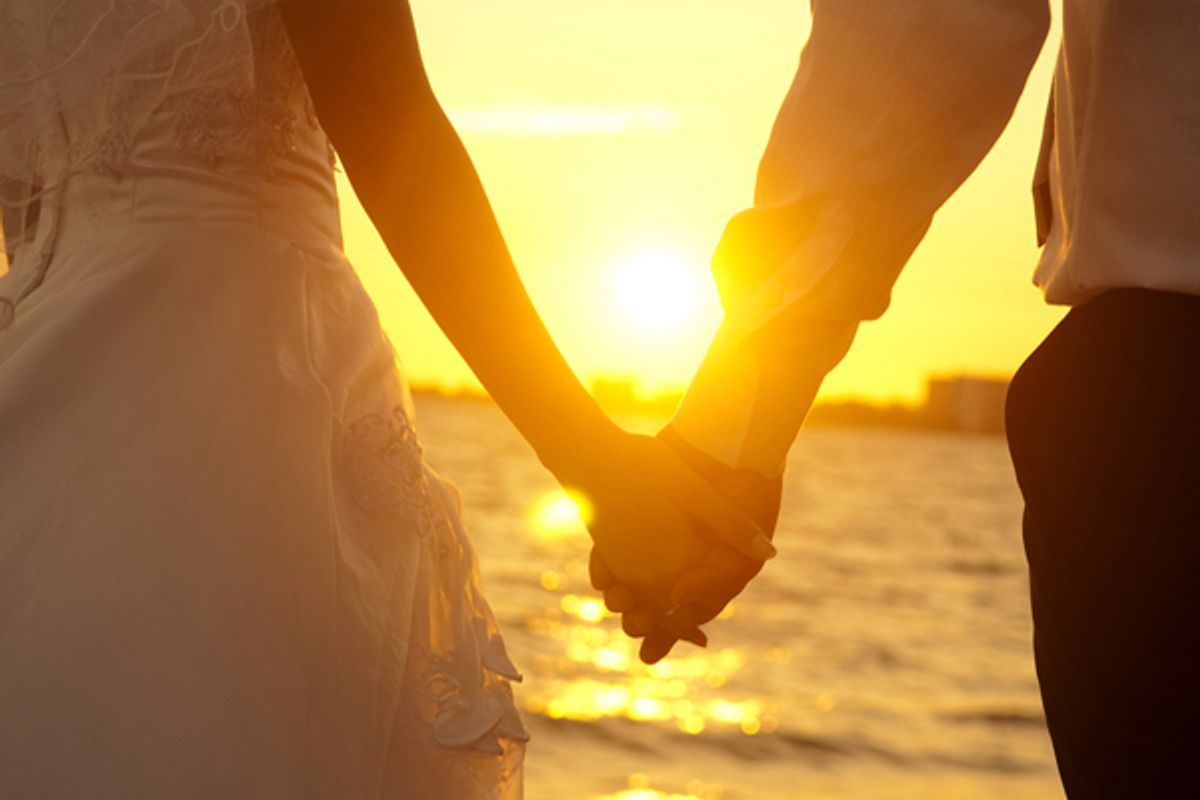 “Have you met Karla’s husband?” my friend asks a group of us at dinner one night. “He’s, like, really old.”

Around the table, suburban moms stop chewing their Mario Batali pastas as their noses wrinkle in agreement. Except for me. I wonder if I should tell them that my husband is old enough to have fathered me without qualifying for a role on "Teen Mom." More precisely, he’s 19 years, 11 months and 10 days older than me. Let’s just call it an even 20.

When we met, I was 25 and visiting Las Vegas to cover the World Series of Poker for a gaming website. Part of my job was flagging down professional poker players between tournaments for interviews. I recognized David from photos I’d seen online. I chased after him in the hallway and asked him for a few minutes of his time.

During our Q & A, while the recorder was still running, David invited me to a barbecue. Being an unprofessional poker reporter, I said yes. After he dropped me off that night, I called my friend back in Vancouver, where I was living at the time.

“He’s old!” she said after finding his poker profile online. “He has tournament cashes from the '80s.”

I grew up in a small forestry and farming town in Saskatchewan, the bowels of which are commonly referred to as Canada’s fly-over provinces. There, if you’re middle-aged, you look it. Outdoor manual labor has left you wrinkly, mortgage and ATV payments have broken your youthful spirit, and your wardrobe consists of sweatpants because eight months of the year, you are dashing from your house to your truck to avoid the cold.

But Las Vegas was the land of the bronzed 55-year-old in snug designer jeans, Affliction T-shirt and tiny fedora. David, lucky for me, was not one of those guys. He looked like a nice, normal grownup. When I finally asked him how old he was on our second date, he told me he was 39.

I was surprised, but not as surprised as I was a month later. We were sitting in a hotel room in New York City when he said, “There’s something I should tell you. ” I waited as David scrawled something down on a piece of paper and tore it up into several smaller pieces. He laid them out in front of me. They said things like, “I am a pedophile,” “I was convicted of manslaughter,” “I was previously married” and “I lied about my age.”

“I want you to put these in order of how bad you think they are,” he said.

As my hand hovered between pedophilia and multiple rape charges – my mind already planning my cab ride to JFK – I lost it and told him he had to just come out and tell me.

I would have been less surprised if he revealed a meth addiction. My problem wasn’t my own feelings about dating someone old enough to have partied at Studio 54 (although David would be quick to point out it wasn’t really cool by the time he was old enough to). My problem was what other people would think about it.

Years passed before I told my mom and siblings David’s exact age. I’ve never pinpointed a precise number for my dad, and he’s either too polite or too uncomfortable to ask.

It's hard not to compare our ages: By the time David graduated from law school, I graduated from elementary school. When he received his high school diploma in 1979, I wasn’t alive. We laugh about this in private, but I know my husband would prefer I skip the old guy jokes in public. “We’re not doing anything wrong,” I tell him. “It’s OK to have a sense of humor about it.” As the self-help bookshelf told my mom, and my mom told me: What other people think of you is none of your business.

Yet, for some reason, I continued to care. And you won't convince me people aren’t curious; new acquaintances always fish for our ages, hoping I’ll bite and just volunteer the information. But I force them to ask. At first I lied, telling people the fake age David had originally told me. But I hate dishonesty, and after a couple years of fudging our numbers, I swore to myself I wouldn’t fib about the two-decade chasm between us anymore. I wasn’t ashamed of our marriage. But lying about it made it seem shameful.

Then, my eyes opened. It was like I had just bought a new blue car and started seeing blue cars everywhere. (I live in Las Vegas, after all.) I watched a sexy brunette run her fingers through the wiry gray belly hair of a lover at a casino pool. My trainer pulled up to the gym one day in a new Porsche – a gift from her boyfriend, 30 years her senior. When I learned a friend's husband was 20 years older, we high-fived. Yes, I told myself, Las Vegas is the perfect place to have a May-December romance.

I was sad, mostly because I didn’t want proof that relationships like ours usually fail. People are betting against us. You, even, as you read this.

But no one knows why one relationship is an eternal flame and another is just a birthday candle. For us – one marriage and two kids later – the age difference has proved to be a small hurdle. Sure, I don’t know who was in "Midnight Run," and I don’t catch his "Odd Couple" references, but that is superficial stuff compared to who gets up with the baby at 4:30 a.m.

The real challenge between us isn't day-to-day stuff but grimmer, long-term things I ponder while nursing our 1-year-old to sleep at night. When our youngest is 20, David will be 70. He might not get to meet our grandkids. And it’s hard not to let my mind wander over to the prospect of widowhood in my 60s, that golden time when other couples will be easing into retirement, finally having worked out all the kinks in their marriage.

The math just doesn’t work in my favor. No matter how hard I try, I’ll never be able to make our ages agree with each other. I’ll never have the luxury of imagining us expiring side-by-side, "Notebook"-style, in a nursing home. I’m trying to come to terms with that.

I focus on the perks of having an older partner: David is smarter and more worldly than any man I’ve previously dated and he’s more established – it’s nice being 29 and not having to make mortgage payments.

At times, I do feel prematurely old. Four years have passed since I left my job and friends in Vancouver and impulsively moved to Las Vegas to be with David. The desert air hasn’t helped my rapidly wrinkling skin and, between the two of us, the cruel lottery of genetics awarded me the lion's share of gray hair. Having two kids makes you look like you served back-to-back presidential terms. Marrying someone who has moved on from bars to bird watching is prematurely aging me, I concluded.

So when one of my friends suggested a girl’s vacation at a new hotel on the Strip, I was excited. I packed my book and looked forward to a pre-club nap by the pool. The pool, however, was what is now known as a day club. I spent an hour watching young people shake their Jersey Shore bodies to horrible music before I called my husband.

Half an hour later, I was in the passenger seat of our car, regaling him with horror stories of $500 lounge chair rentals and lack of shade.

And he was right. So I suggested we do something I love, and we went to a matinee. There, at the 3 p.m. show of "Bridesmaids," we were just two more invisible people taking our places amongst the teens and the silver hairs, two people whose ages could bridge the gap between everyone there.

At my suburban mom dinner a few weeks later, the voices of the ladies joined the din of the crowded restaurant. When the word “gross” spilled out over the table, I thought about growing indignant, but instead I took a bite of crab. This time I didn’t feel like I was hiding a shameful secret. There was just nothing they could say that would matter to me.