The Clinton-era ghosts that haunt Newt 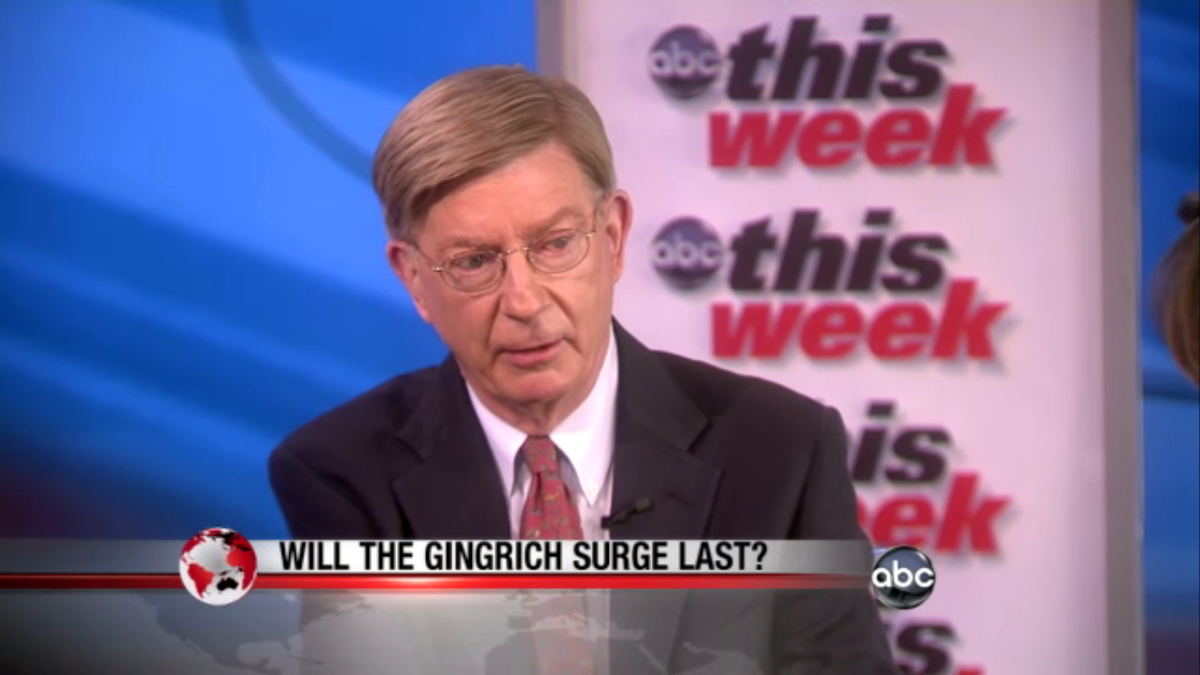 George Will on ABC's "This Week" (HuffingtonPost)
--

A clip of George Will disparaging Newt Gingrich on Sunday's "This Week" on ABC is receiving plenty of attention, and for good reason. It's not every day that one of the nation's leading conservative pundits, especially one as generally well-mannered as Will, brands the candidate who is running in first place in the Republican presidential race "the classic rental politician":

Actually, Will has made this same basic case against Newt before; it was back in May, though, when Gingrich's candidacy, a long-shot to begin with, seemed to imploding amidst an epically botched rollout. But now that Newt is basking in the most improbable polling surge in a Republican campaign that's been full of them, Will's naked hostility is worth considering a little more closely, because it typifies a common attitude toward the one-time House Speaker among Republicans whose involvement in national politics dates back a couple of decades.

It has been 13 years since Gingrich stepped down as Speaker and many of the details (or even the basic arc) of his four-year run are either forgotten or unknown to many of today's conservatives. Certainly, Gingrich has done his best to portray his tenure as an unmitigated conservative triumph, one that resulted in a balanced budget, welfare reform, and the reelection of a Republican House for the first time since 1928.

But Washington fixtures like Will who lived through the mid-1990s know the real story all too well -- one of an undisciplined Speaker who blustered his way into needless controversy, routinely contradicted and undermined his own party's message, and emerged as the political gift that kept on giving for Democrats, who built their much of their 1996 campaign strategy on running against his name and image. Oh, and there was also the interminable ethics inquiry that dominated headlines, further eroded his public image, and ultimately led the House to reprimand Newt and fine him $300,000. The reality of Newt's speakership is that whatever success Republicans enjoyed between 1995 and 1998 came in spite of his leadership, and not because of it -- something that conservatives like Will were not afraid to point out at the time.

For instance, in a column in late 1995 extolling the successes of the Republican Congress that had been seated at the start of the year, Will wrote:

There has been too much blather, much of it from Gingrich, who has paid dearly for his refusal to heed the advice given to him -- early and often -- that he ration the portions of himself that he serves to the public.

The 104th's impressive record has been obscured by the fog-of-war rhetoric from its leader, for whom politics is war carried on by other means. Roll Call, the newspaper of Capitol Hill, has obtained tapes of some of Gingrich's frequent conversations with Army officers. They are filled with military jargon ("after-action reviews," "small-unit cohesion") and allusions, such as, "I think our budget fight is a lot like the [Duke of Wellington's] Peninsula Campaign."

Gingrich must know what Wellington said of some troops sent to him for that campaign: "I don't know what effect these men will have upon the enemy, but, by God, they terrify me." It might be harmless hyperbole for him to say, "I am in combat everyday," but he scares people when he says things like: "The left at its core understands in a way Grant understood after Shiloh that this is a civil war, that only one side will prevail." That makes people yearn for a rhetorical Thermidor.

And that was tame. By 1997, conservative pundits -- and more than a few Republican House members -- were in open revolt against Newt, whose ghastly unpopularity had threatened the party's control of the House in the the previous fall's election. As the ethics saga came to a head, William Safire called on Gingrich to resign, calling his actions "wrong, even if not unlawful." William Kristol and his Weekly Standard joined the "Dump Newt" campaign. So did the National Review's Kate O'Beirne. It was around this time that Gingrich was almost toppled in an attempted coup organized by Tom DeLay. The next year, after Republicans suffered a nearly unprecedented loss of five seats in the 1998 midterms, Gingrich finally folded and left town.

I wrote a while back that one of Newt's (many) obstacles as a presidential candidate would be the fact that plenty of influential Republicans are well-aware of what a debacle his run as Speaker really was. To his credit, Gingrich has apparently made some progress in making even some of them forget; Kristol's Weekly Standard has actually been fawning over him recently. But Will's "This Week" rant is a reminder that others haven't forgotten at all -- and that as he surges into contention in the GOP race they'll waste no opportunity to tell their fellow conservatives about the Newt they know all too well.