It's like your worst nightmare -- locked in an airplane restroom. But what if you're the pilot? 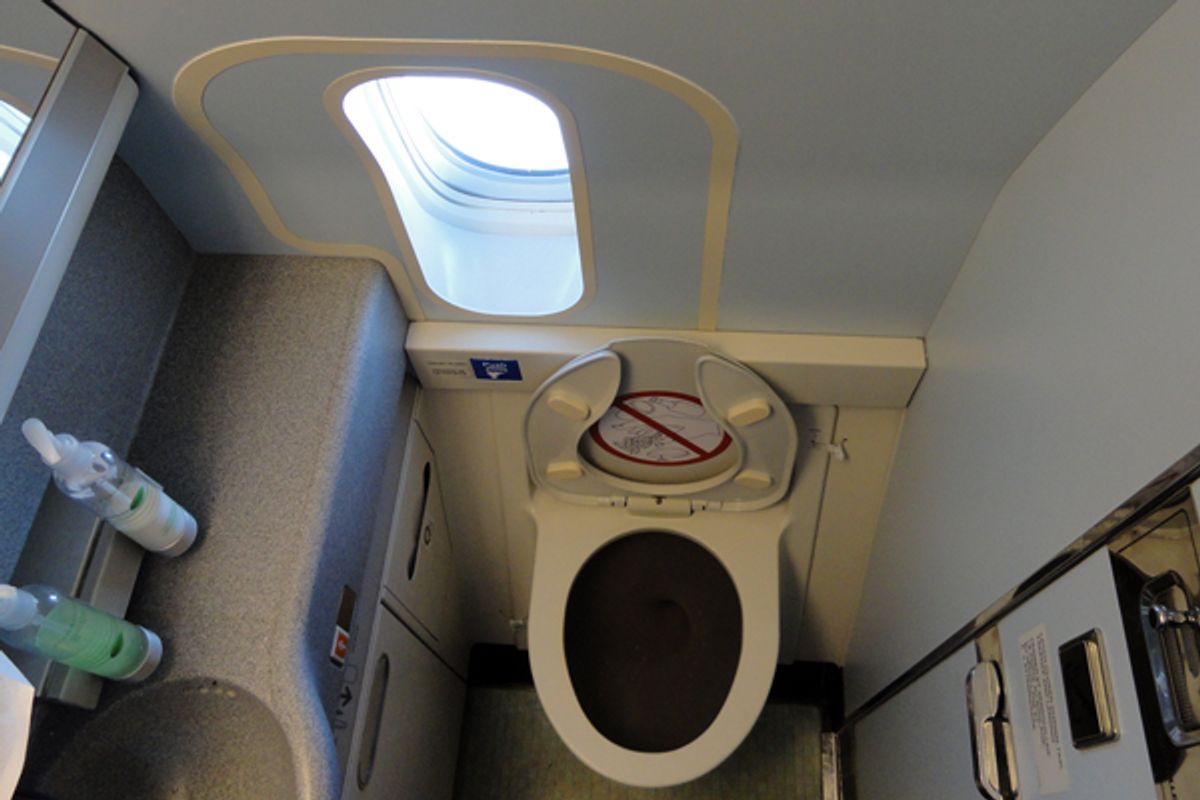 What's the protocol if you're a pilot and you're trapped in the lavatory?

The captain had stepped out to use the toilet, leaving the first officer and flight attendant in the cockpit. (Rules require that a second crew member always be present in the cockpit; in this case that meant the plane's sole flight attendant.) When the lavatory door jammed, he was unable to extricate himself for several minutes.

Sorry, there's no training or checklists for this one. It comes down to common sense. If the door really is stuck, you break out of there. The doors are pretty flimsy; it shouldn't be difficult.

And that is what the Chautauqua captain eventually did.

The problem was, a passenger had gone and knocked on the cockpit door, attempting to explain to the first officer and flight attendant what was happening. Presumably he was just trying to help out. The captain would not have asked him to do this, since obviously his colleagues in the cockpit weren't going to take the man's word for what was happening. A passenger in any way contacting the cockpit was bound to trigger an unnecessary sequence of events.

Which is exactly what happened. An emergency was declared, fighter jets summoned -- the whole post-9/11 flurry.

Complicating things, the man reportedly spoke with a thick foreign accent, described in some reports as “Middle Eastern,” whatever that means exactly. Now, as a nation we've been overreacting to people's skin color, to their clothes and to the sounds of their voices ever since the attacks of 2001, and nobody has been more critical of this than me. Would things have escalated the same way, we wonder, had the man talked like he was from Texas or New Jersey?

Maybe not. However, all things considered, putting ourselves in the position of this first officer and flight attendant, we need to be sympathetic. The man's accent was a factor.

Soon enough the captain managed to free himself from the W.C. and was back in the cockpit. The crew then radioed ahead that everything was resolved. "There is no issue, no threat,” reported the crew to air traffic control.

Well-handled, if you ask me. And that should have been the end of it. This story should never have been in the news.

On the other hand, is it any surprise that it was?

Airplane lavatories and I don't get along, as some of you might recall. Although I've never been stuck in one, indeed the most embarrassing thing that has ever happened to me in an airplane happened in a lav.

The cleanest airplane lavs I've ever seen, by the way, were on Korean Air. Somebody had told me that Korean Air flights carry a flight attendant whose sole job is to clean and straighten the lavatories. To find out, I went into the bathroom and threw garbage all over the floor, then came back in 10 minutes.

Just kidding, though in fact they were immaculate, and refreshed by flight attendants several times over the course of the flight. Each was stocked with a basket of complimentary toothbrushes and bottles of lotion. This was economy class.

On other overseas carriers you might find framed pictures and flowers. Some have installed double-wide compartments, and those on the outboard sides of the cabin sometimes have windows.