Despite devastating health risks, both parties are pushing to allow more drilling near urban areas 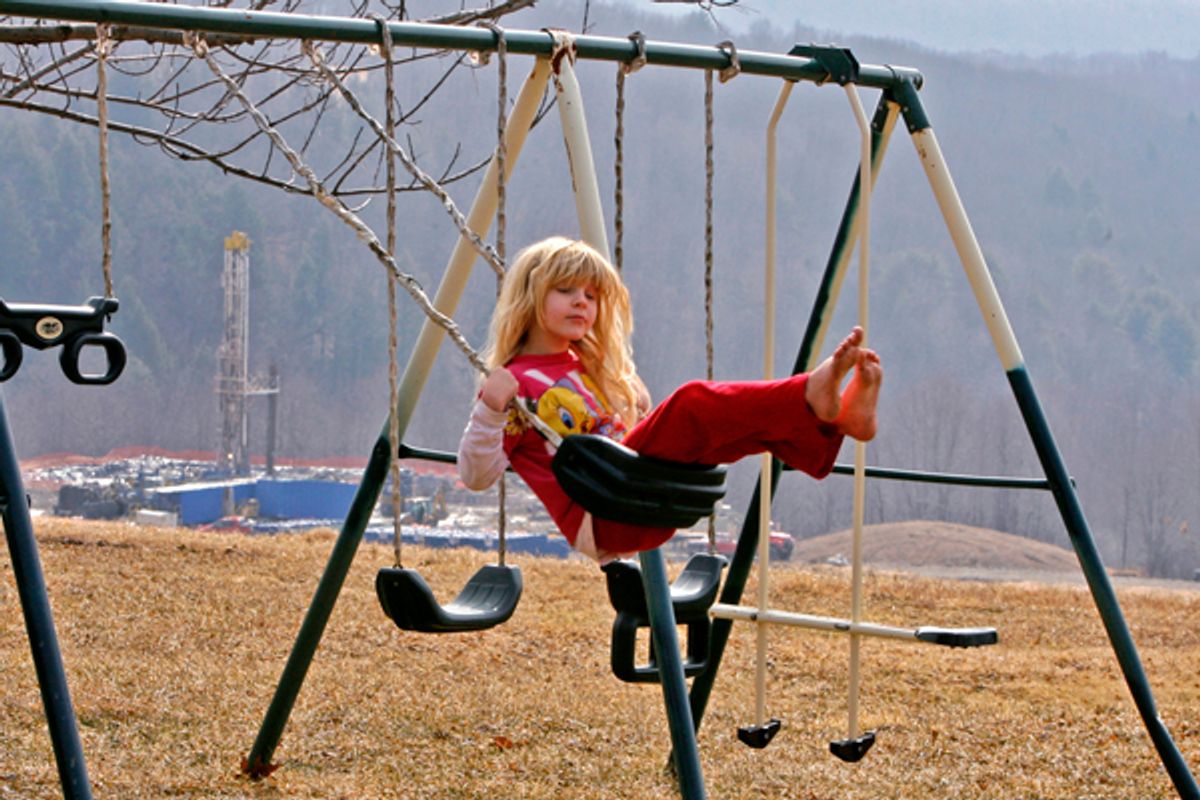 On the relatively rare occasions that city folk and suburbanites previously had to think about oil and gas drilling, many probably conjured images of grasshopper-esque rigs dotting remote landscapes like Wyoming's mountain range, Alaska's tundra or Oklahoma's wind-swept plains. Most probably didn't equate drilling with the bright lights of their big city, but they should have because urban America is fast becoming ground zero for the same fights over energy that have long threatened the great wide open.

With our nation's still unquenchable (and still highly subsidized) thirst for fossil fuels, the false comfort of NIMBY-ism and the fairy-tale notions of "safety in numbers" is quickly vanishing in our cities, as controversial oil and gas exploration projects creep into metropolitan areas. Incredibly, this geographic trend is accelerating just as new drilling techniques are evoking serious concerns about excessive air pollution and about adverse effects on limited water supplies -- problems that have plagued rural energy-producing regions for decades, but are sure to be even worse as they hit densely populated areas.

This year, worries have been particularly acute when it comes to hydraulic fracturing (aka "fracking") -- the process of pumping water, sand and potentially toxic chemicals into the ground to break up rock and release natural gas.

In May, Duke University documented disturbingly high levels of methane in groundwater near fracking sites in Pennsylvania. Weeks later, the Environmental Working Group uncovered a 1987 agency report confirming that fracking contaminated well and groundwater in West Virginia. For decades, the industry had been able to deny this critical case study and insist fracking was perfectly safe because, as the New York Times notes, the case's details "were sealed from the public when energy companies settled lawsuits with landowners." Now, though, the oil and gas industry cannot issue such denials with impunity -- especially considering an even more recent EPA finding that the aquifer in Pavillion, Wyo., contained "high levels of cancer-causing compounds and at least one chemical commonly used in hydraulic fracturing," as ProPublica reported earlier this month.

In Pennsylvania, for instance, Republican Gov. Tom Corbett is pushing a multistate commission to accelerate fracking in the heavily populated Delaware River Basin, even though his state was hammered by a devastating fracking-fluid spill in 2009, and despite news that wastewater treatment plants might not be fully removing fracking chemicals from the two rivers that provide drinking water for Pittsburgh and Philadelphia. Likewise, in super-suburban New Jersey, Republican Gov. Chris Christie vetoed a permanent ban on fracking.

Christie, though, at least ended up signing a one-year moratorium, which is more than can be said for many top Democrats throughout the country. That's no small point of distinction in understanding the shifting partisan politics of energy. As the Obama White House aggressively backs a pro-drilling agenda at the federal level (and is duly rewarded with big energy-industry campaign donations), a Democratic Party once known for championing health and the environment is, in many locales, playing just as big a role as the GOP in bringing the downsides of oil and gas exploration into the American city.

In New York, for example, Gov. Andrew Cuomo, his party's possible presidential standard-bearer in 2016, has been trying to weaken his state's moratorium. The result of his regulatory "reform" effort, reports ProPublica, could affect not only upstate cities, but the Big Apple itself, with one recent draft proposal from the Democratic administration possibly "open(ing) the door to drilling within 1,000 feet of aging underground tunnels that carry water to New York City."

In Colorado, the story is much the same with Gov. John Hickenlooper. Previously an oil and gas geologist, the newly elected Democrat (also being floated for president in 2016) has named a natural gas firm's general counsel to head the state's Public Utilities Commission. He also packed the state's Oil and Gas Conservation Commission with oil and gas industry allies -- a move that drew pay-to-play corruption allegations when it was discovered that one appointee was a ConocoPhillips governmental affairs executive who donated to Hickenlooper's campaign.

During his first year in office, Hickenlooper has been willfully ignoring the EPA data, telling Coloradans that "hydraulic fracturing doesn't connect to groundwater, that it's almost inconceivable that groundwater will be contaminated." He has also publicly berated his Democratic predecessor, Bill Ritter, and environmentalists for supposedly going "overboard" in passing modest drilling regulations. As if this wasn't enough, Hickenlooper followed last week's damning EPA report by gleefully announcing his support for a huge proposed fracking site just a few miles from downtown Denver. The project, which would add to other proposed drilling sites near population centers in Commerce City and Colorado Springs, could end up bringing the same air pollution and drinking water problems seen in Colorado's rural energy-producing Western Slope right to the state's densely populated Front Range.

To better understand the real-world implications of all this -- to comprehend how fracking, urban policy and Democratic politics can uniquely collude to create serious trouble -- look no further than Fort Worth, Texas, under Mike Moncrief, the Democrat who served as mayor at exactly the time that Fort Worth encouraged a boom in gas drilling within its city limits. The Austin American-Statesman notes that Moncrief, who personally made hundreds of thousands of dollars in royalties from drilling, "largely supported drilling" -- and the region has subsequently become a national cautionary tale.

In 2010, the Statesman reported that the Texas Commission on Environmental Quality conducted an investigation into the air effects of the city's drilling and "found that three (air quality) samples were above certain limits for benzene" -- a carcinogen associated with natural gas drilling compressors. Additionally, "one sample, at a country club in town, was at levels high enough to cause nausea and headaches in some people." In all, according to the Dallas Morning News, "the industry dumps 20,818 tons per year of organic compounds into the air" over a Fort Worth region that "already fails to meet federal air-quality standards." The findings followed nearby Dish, Texas, discovering "high levels of 15 chemicals" associated with drilling -- ultimately prompting that town's mayor to move away for fear that fracking was adversely harming his family's health. And this, of course, says nothing about how the metro area's heavy drilling has both taxed its drought-stricken water supplies and raised seismologists' fears of a link between fracking wastewater disposal and earthquakes.

Deflecting questions about their loyalties being tied to oil and gas campaign contributions, and downplaying health and environmental concerns, Republican and Democratic politicians typically cite both municipal budget crises and alleged job growth as their justification for supporting urban drilling. These are weak rationales, to say the least.

It's certainly true that many states and cities are strapped for cash in this recession. Additionally, as Headwaters Economics shows, it's also true that, if tax policy is calibrated properly (a big "if"), drilling is far more certain to create at least some revenue before it creates lots of jobs. However, because the impact costs of drilling are so huge -- think: road repair, municipal services, etc. -- the net cost-benefit effect of drilling on municipalities has been mixed (and that's without even counting the undocumented-but-socialized costs of drilling-related health and environmental problems). As just one example, in Pennsylvania, many convincingly argue that the costs have been far higher to taxpayers in drilling areas than the revenues they are receiving in return.

A part of that imbalance is a result of the industry's failure to create a promised economic ripple effect. But a more important factor is oil and gas companies' overinflated estimates of revenue-producing job growth. As a thorough new study from the nonpartisan group Food and Water Watch reported last week, there remains a huge gap between the number of jobs oil and gas companies promise will come with increased drilling, and the number of jobs actually created when those drilling projects happen.

This is the standard practice of 21st century piracy: Corporate executives and their paid-for politicians make fantastical promises to get public acquiescence, but then don't deliver in the end -- except, of course, for the faraway shareholders who also double as political campaign donors. When community opposition inevitably arises, this rogues gallery of profiteers and apologists then deploy the same bromides about the need for revenues and jobs -- and, for good measure, they throw in a little military-grade psyops for good measure.

Ultimately, they are banking on an urbanized citizenry still believing that the energy debate is just an esoteric and parochial dispute taking place in some distant Siberia at the end of the earth. They hope we don't see those rigs popping up on the edge of town. They hope we only notice when they are on our once-idyllic block or right in the middle of our city's newly renovated downtown -- when it's already too late to stop them.