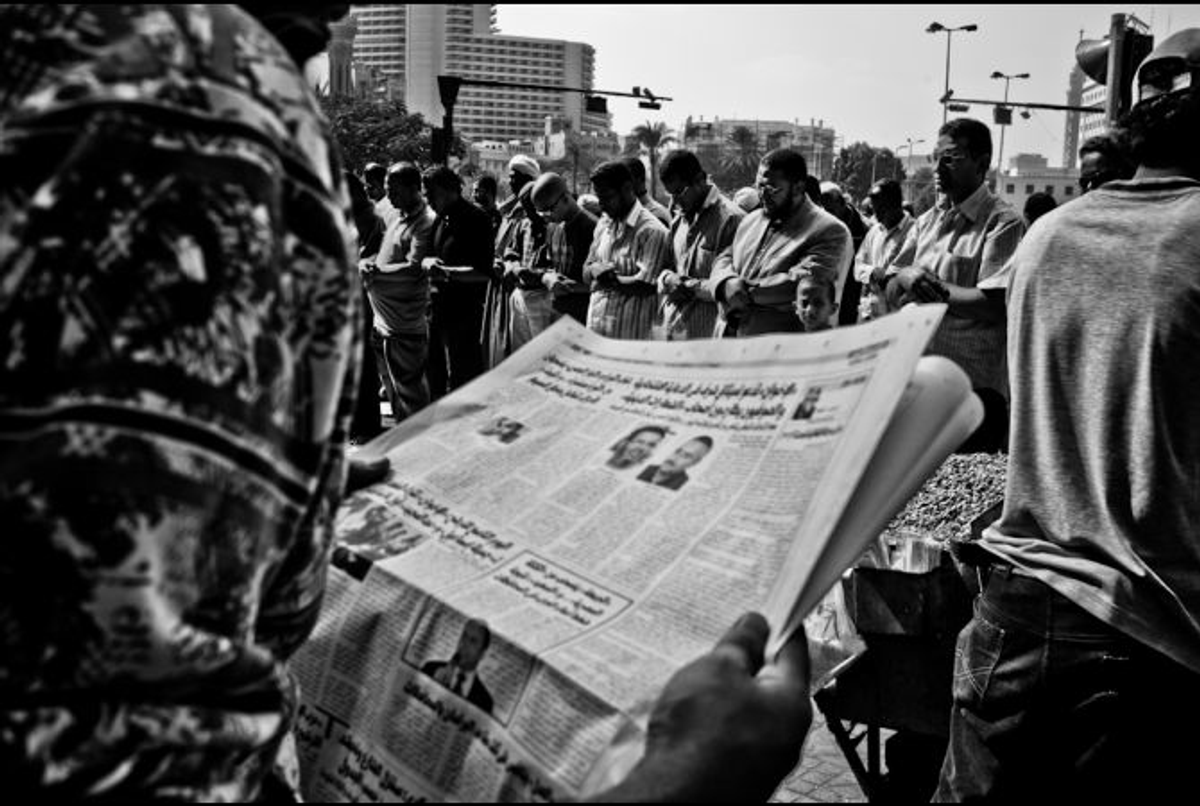 CAIRO — On the streets of post-revolution Cairo, opinions are expressed freely and loudly. They come in the angry voices of protesters marching through traffic, and the graffiti scrawled across buildings and bridges. The days when criticism of the country’s leaders was confined to hushed whispers in smoke-filled cafes are gone.

But while many Cairenes on the street have broken free of the fear that silenced them before, journalists and analysts say fear — or at least a sense of caution — still pervades many of the newsrooms trying to document a chaotic city in transition.

Ziad Akl, an analyst with the government-financed think tank Al-Ahram Center for Political & Strategic Studies, said that although the country’s military rulers allow a slightly “higher ceiling” than ousted President Hosni Mubarak, media outlets and researchers like himself are still “very much bound and constrained by the state.”

Under the iron-fisted rule of the Mubarak regime, open criticism of the presidential institution was not tolerated. Today, scathing editorials targeting Mubarak’s loathed and now-dissolved National Democratic Party regularly appear in papers.

But media experts and local reporters say the aura of impenetrability that once surrounded the presidential institution has simply shifted to the country’s military rulers, who replaced Mubarak when he was forced out in February.

There are signs that the military intends to maintain that status quo.

For example, it recently expanded the country’s long-hated “emergency law” to include broad language under which news organizations could be prosecuted for “spreading false news.”

Days before security forces raided Al Jazeera’s Cairo affiliate, saying the station lacked a license and neighbors were complaining of noise, Minister of Information Osama Heikal publicly threatened to “take legal measures against satellite TV stations that jeopardize stability and security,” according to Reporters Without Borders.

The organization says many of the 12,000 civilians being tried in military courts as part of a post-uprising crackdown are journalists and bloggers.

And in March, Major General Ismail Mohammed Etman sent out a letter advising media outlets to consult with the military’s “moral affairs” or intelligence departments on any matters involving the military.

“These are the authorities specialized in reviewing such matters, and that is to ensure the safety and security of the homeland,” the letter read.

The Ministry of Information declined repeated interview requests from GlobalPost. Housed in a fortress-like building on the Nile surrounded by barbed wire and dozens of soldiers in armored vehicles, the ministry has been in a state of turmoil since the uprising and reluctant to talk publicly.

Youssef Sidhom, editor of the small Christian weekly Al-Watani, said he simply avoids all stories about the military to “keep out of harm’s way.”

“Everything military is considered highly sensitive, a matter of national security,” he said. “We don’t question the military. We don’t joke with the military.”

While there is disagreement among journalists on how far reporters can or should go in scrutinizing the military, there is a consensus that it is an area where one must tread lightly.

Fathy Abou Hatab, online managing editor for Al-Masry Al-Youm, a popular daily owned by a wealthy businessman, said the website often publishes pieces critical of the army’s new political role in Egyptian government. Stories on the military budget or inner workings of the institution, however, remain strictly off limits.

While the state largely controls printing presses and circulation, online media like Al-Masry Al-Youm’s website are generally subject to less scrutiny. It’s more difficult for the state to regulate the free flow of online content, and it’s considered less of a priority in a country where only about a quarter of Egypt’s 80 million residents has Internet access.

Still, there are limits to that freedom. For content deemed too sensitive for regular publication, Hatab said he sometimes features it online just long enough to be picked up by Egypt’s social network-savvy youth.

From her desk in the publication’s bright, modern newsroom, Aya Abdullah monitors the nonstop cycle of tweets and Facebook posts. The shy 21-year-old in a shockingly pink headscarf passes along news tips culled from the social networks to reporters who can then head out to cover a protest or other spot news.

Abdullah said the army is paying more attention to social media after the Tahrir Square uprisings but it is still largely an unrestricted space for sharing and gathering information in real time.

“When there are clashes on the street, somebody is tweeting it,” she said.

Revolutionary activist Gigi Ibrahim agreed that social networks like Twitter and Facebook, through which a video or photo can go viral in minutes, are too fluid for the military to effectively censor.

“Now you have a reporter everywhere, on every corner,” she said in an October panel discussion hosted by GlobalPost and the non-profit Open Hands Initiative. “Nothing can be hidden anymore.”

For Safwat El-Alem, a Cairo University political media professor, journalists and social-networking activists have gone too far in their criticism of the military.

“There is chaos in media after the revolution,” he said, sitting in the living room of his spacious home near the Giza pyramids. “There is an uncontrollable flow of information happening now during these sensitive times. Media and citizen journalists are not following the rules of society.”

Egypt’s media scene is complicated by the presence of a powerful state media apparatus used to distribute the official state version of events. The print publications and TV broadcasts have a wide reach and maintain massive influence over the Egyptian public.

Hala Fahmy is a 20-year veteran of state TV. These days, though, the well-known TV personality spends little time inside the government building where she built her career. More often, she can be found protesting from the street below, pushing for reforms to make government-owned news more accountable to the public.

Although still technically an employee of state TV, Fahmy said she has not been allowed to work since the Tahrir Square uprisings, during which she slammed the ministry in scathing on-air interviews with satellite channels.

“They think I’ll plot to overthrow the regime,” she joked on a recent afternoon as she stood outside the state TV building with a small group of protesters.

Dressed casually in jeans and a rainbow-colored top, Fahmy seemed unfazed by the dozens of soldiers and policemen keeping close watch on the demonstration. At one point, she turned to chastise an officer reading off the phrase on her sign to someone on the other end of a cell phone call.

The bright yellow sign said in Arabic: “Why are you confused? Why are you even thinking about it? A revolution ends military rule.”

Akl, the analyst for the state-funded Al-Ahram Center, said he believes government media, including the paper housed in the building where he works, is slowly losing influence to independent publications that strive to print the truth at a critical moment in Egypt's history.

“I know a lot of people who actually changed their historical cultural habit of reading Al-Ahram every day, and people are starting to read Al-Masry Al-Youm” or other independent papers, he said.

“I for one never read Al-Ahram anymore,” Akl said at one point, laughing. “Yeah, I work for it but I don’t like it, I really don’t.”