A new blog gives voice to guys who empty their pockets just to see naked flesh, and reveals a lot about male desire 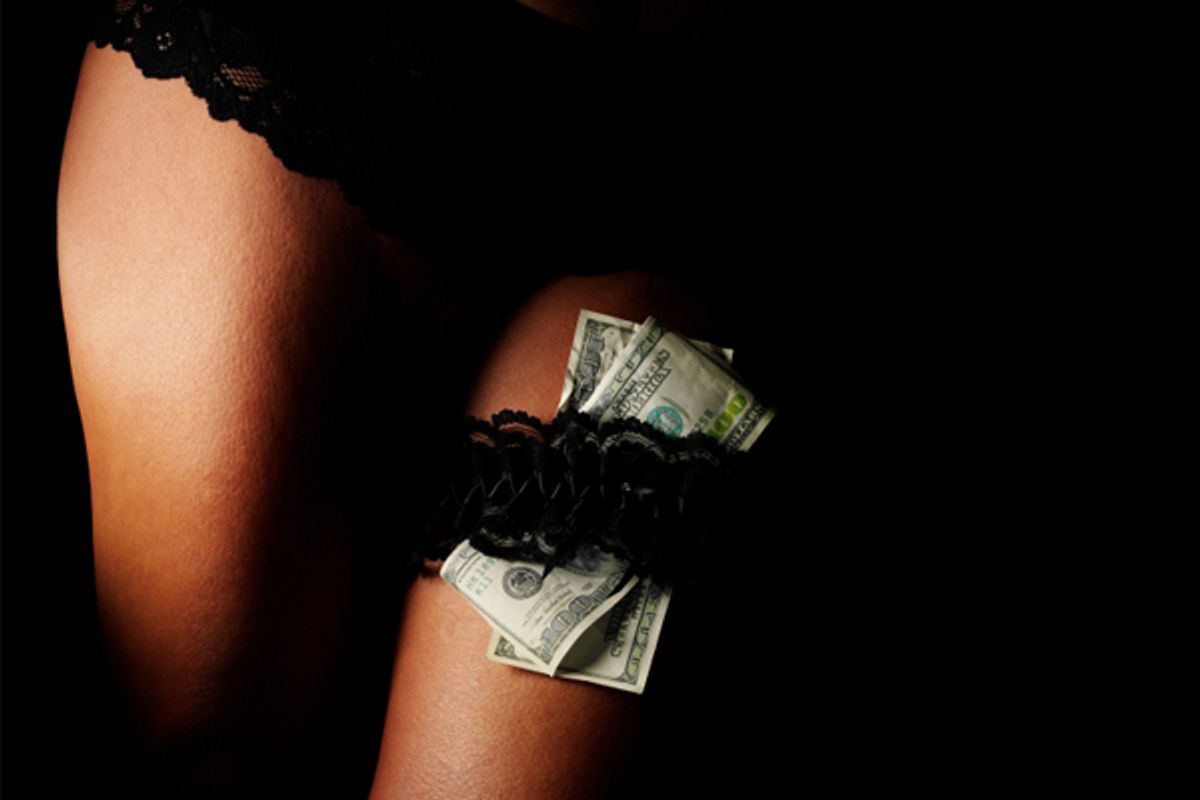 Why do men visit strip clubs? The answer to that question may seem so obvious as to not even warrant asking in the first place, but the new blog Letters From Men Who Go to Strip Clubs" proves just how wrong that assumption is. It's the brainchild of journalist Susannah Breslin and just the latest in a series of "Letters" projects in which men email her with brief confessionals about why they gravitate toward the sex industry – whether it's by watching porn at home, trolling Craigslist for a cheap blow job or tucking dollar bills into strippers' g-strings – some of which she then posts online. The result is essentially open-source sociological data -- and some of it is bizarrely poetic.

"In the dead of night, alone at home, the loneliness sometimes becomes unbearable," writes one man. "There aren't many places to go in the middle of the night, and most of those choices don't necessarily ensure any kind of reasonable human interaction." Another man explains, "Nobody talks to me, nobody cares what I say. I'm a 24-year-old drone who wastes his days sitting at a computer reviewing spreadsheets that don't really matter," he says. "I just want to talk to someone who cares, and $1 every 3 minutes is a lot less than $250 an hour for a therapist."

It isn't just sad sacks looking for companionship -- although there are plenty of those -- it's also men who harbor intense resentment toward women: "I’m old in years – 61 – even though I’m an 18-year-old at heart, and I like to think this is my revenge for all the beautiful women in the world whom I can’t approach, whom I can’t get, this idea that I can have some young beauty dance and smile at me any time I want." There are also the guys who are happily married and simply enjoy the occasional entertainment of beautiful, naked women.

Breslin spoke to me by phone from her apartment in Chicago about Letters From Men Who Go to Strip Clubs, what she's learned about male desire and why feminist debates about the sex industry drive her nuts.

You seem particularly interested in men's role in the sex industry. Why do you think that is?

To me, the sex industries are this great petri dish for discovering what drives people, because you get to see them behave in extreme ways. A lot of the focus is on the women, though, because that's more titillating. Often times, people studying or writing about sex work are men, and they're more drawn to questions like, "What kind of woman does this? What is her life like? What kind of female mind does it take to be able to sell her body for sex?" I've always been very interested in men and trying to figure out how the male mind works, and sex work seemed like a way to really find that out. The sex industry is like the private X-rated Disneyland for men. In the sex work world, men get to do things that are socially unacceptable, whether that's getting fucked in the ass or being ruthless sexually, so the analogy I like is the Wizard of Oz -- I always want to see what's behind the curtain.

Sometimes it seems like every stripper, every call girl, every sex worker of every stripe has a blog -- but johns and strip-club regulars? Not so much. You hit on the fact that the stories of sex workers themselves might be more titillating, but why else aren't we hearing from the men?

Well, I think there's a taboo these days around men talking openly about their sexual fantasies or their participation in the sex industry. Right now, it's quote-unquote not OK for a man to have sex with a prostitute or to be married and go to a strip club, and that’s partly due to political correctness and partly due to feminism that those things are pathologized.

I know a lot about sex work, but I feel like I also got a great education in men. The main thing was that it made me more sympathetic toward men. When you're on the set of a gang bang and there's a hundred guys all fucking one woman, you actually see that it's not just a bunch of animals. You see how complicated it is to be a man -- you know, you're supposed to be big and strong, but you also have these desires and conflicted feelings. Ideally, anything laid bare will invoke compassion, and that's what it made me feel. Like a friend of mine says, "You see men as they are and you love them anyway."

What about how your experience reporting on sex work influenced your view of feminism? You're often critical of feminism, especially where it intersects with the sex industry.

When it comes to sex work, a lot of the time feminism gets it wrong. They sit at one extreme or another. First, feminism as a movement took the stance that sex work is bad and inherently exploitative of women. And then there's this movement in the last 10 years or so that, no, sex workers are empowered and they're in control of their bodies and they're feminists too and we should support that. Both of those are just radical positions and, in my opinion, any radical position is going to be inherently wrong. There are women in the sex industry who are completely fucked and strung out on drugs and being exploited and being victimized. And there are also women like Nina Hartley who are born to do sex work and are high functioning and understand themselves and how to function in that world.

My main problem with feminism and sex work is that the majority of feminists talking about sex work are in the academy. They took women's studies classes and 99 percent of what they learned about sex work is, like, on the Internet or from one porn star they met once. If you have something to say about it, you should go into that world and study it and get to know those people and spend time there. Instead, feminism is just manufacturing abstractions about what sex work is, and they're too chicken to go in and really explore the industry. So for the most part, feminism can't tell me anything about sex work because they're too busy posturing as feminists to find out what that world is really like.

I mean, studying the sex industry is really challenging work. It's hard to be a sex worker, it's hard to inhabit that world and it's also hard to study it and be around it, because it's brutal. It's not, in my opinion, a business like any other. These are people whose jobs are to stick part of their body into somebody else's body, or have somebody else's body inside of their body. That's tough work.

That's part of why not a lot of women have written about it. The payoff after you've spent time writing about or working in the sex industry is your understanding of human nature is unrivaled. You just see people flayed. You see what impulses really drive us. It was hard for me for several years to come back from that. Once you’ve seen humanity laid bare, there's a time when you kind of want to unsee it, go back to living in Cinderella land.

It's always complicated. It's never black and white. It's never all misogynist or all feminist. It's complicated because it's a business that reflects our interior, and the interior is always conflicted and at war with itself.

The sex industry can be really ruthless and brutal. If you're around that enough, you start to wonder if everybody's impulses are really base and everyone's either trying to fuck or kill each other. You don't see the flipside of healthy nuclear families and dads who mow the lawn on the weekends and swimming lessons in the toddler pool. Over time, I've been able to have a yin and yang attitude about it, which is that that darkness is always there, but there's also this other part of it that is about lightness.

Getting back to the latest "Letters" project, what have you learned from it so far?

The "Letters" projects have been of varying success, but I love it as a genre because I find the letters very endearing. I'm always kind of surprised by how enamored men are by women. What I see as a sub-context in the latest project is how much power the stripper has. She's the focus. It's not about a guy manipulating some woman to get what he wants, it's about, "I have to pay to get this girl to even pay attention to me and when she does, she gives me the thing that I want that I can't get at work and I can't get from my wife and can't get by myself," and I think they're sort of awed by that.

That gets back to that common theme of love --

I think the other piece of it is the loneliness. They're starving for human connection. I think our female desire is for emotional connection to transcend that inescapable loneliness of being a human being, and theirs is physical, so they go to these places where someone will touch them.