As an LDS leader, he administered among the most socially conservative policies of the church 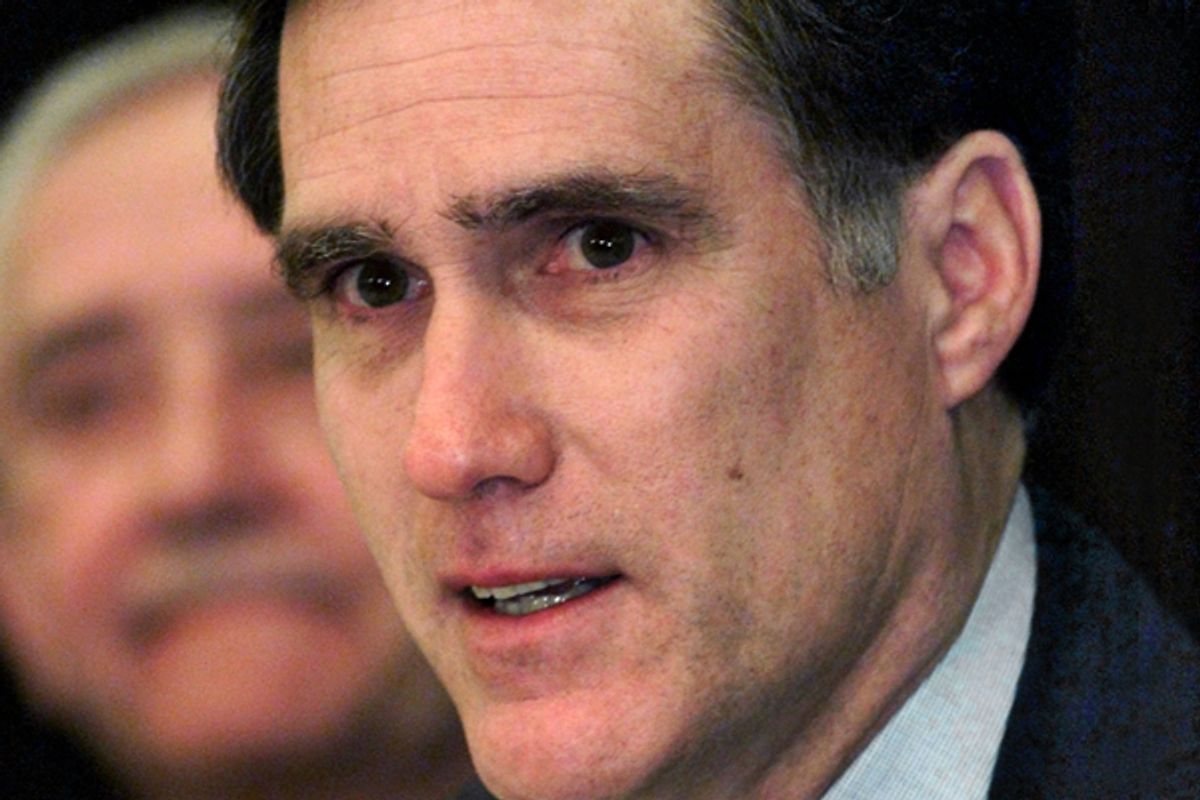 The core of Mitt Romney's public identity has long been as a businessman and manager. But for years before he entered politics with an unsuccessful Senate bid in 1994, Romney was something else: a volunteer leader in the Church of Jesus Christ of Latter-day Saints.

Taken together, recent reporting as well as largely forgotten stories from the '94 race paint a portrait of Romney as an enforcer of the most socially conservative policies of the LDS church -- particularly in the realms of sex and women's rights.

From the early 1980s through the mid-1990s, Romney served as bishop of the LDS congregation in his hometown of Belmont, Mass., and then as president of the Boston stake of the church, which has been described as the equivalent of a Catholic diocese.

Here's a timeline of the incidents that have emerged so far:

Early 1980s: As bishop of the LDS congregation in his hometown of Belmont, Mass., Romney confronted a recently divorced church member named Carolyn Caci to "express both his disapproval of divorce and to remind the middle-aged woman, who had begun dating again, about the church’s opposition to premarital sex," the Washington Post reported in a must-read story Tuesday. Romney also told her not to fall in with a crowd of Mormon women who published a feminist journal called Exponent II.

1984: Romney urged church member and divorcee Peggie Hayes to give up her newborn son for adoption, in keeping with church policy against children being raised by single mothers.

"He told me he was a representative of the church and by refusing I was failing to comply with the church's wishes and I could be excommunicated," Hayes told the Boston Globe during the '94 campaign, adding:

"He was saying that because [my son] Dane didn't have a Mormon father in the home and because of the circumstances of his birth -- being born to a single mother -- then the expectation of the church was that I give him up for adoption to the church agency so he could be raised by a Mormon couple in good standing."

In a statement at the time, Romney defended his advice to Hayes to give up her son -- in keeping with the official church policy that single mothers "should be encouraged to place the child for adoption, preferably through LDS social services" -- but denied ever threatening Hayes with excommunication. Hayes ultimately kept her son and left the church.

1980s: At some point in the 1980s or 1990 (the exact date is not clear), a pregnant church member named Carrel Hilton Sheldon was advised by her doctors "to terminate her pregnancy when she was being treated for a potentially dangerous blood clot," according to the New York Times. The LDS Church is staunchly opposed to abortion.

Romney "showed up unannounced at the hospital, warning her sternly not to go forward" with the abortion, according to the Times' account of an Exponent II article describing the experience by Sheldon. She is quoted in a forthcoming book saying Romney has good qualities but "he was blind to me as a human being" during the pregnancy.

1993: Speaking at a Mormon gathering, Romney allegedly labeled homosexuality "both perverse and reprehensible" and added "he was appalled at the incidence of homosexuality in the [Cambridge] ward," several of those present at the meeting told the Globe in 1994.

Romney rejected the description of the meeting reported by the Globe, maintaining he had in fact denounced any nonmarital sex as "an evil."