A dark episode hints at promising future developments. If only the series weren't so bland and safe 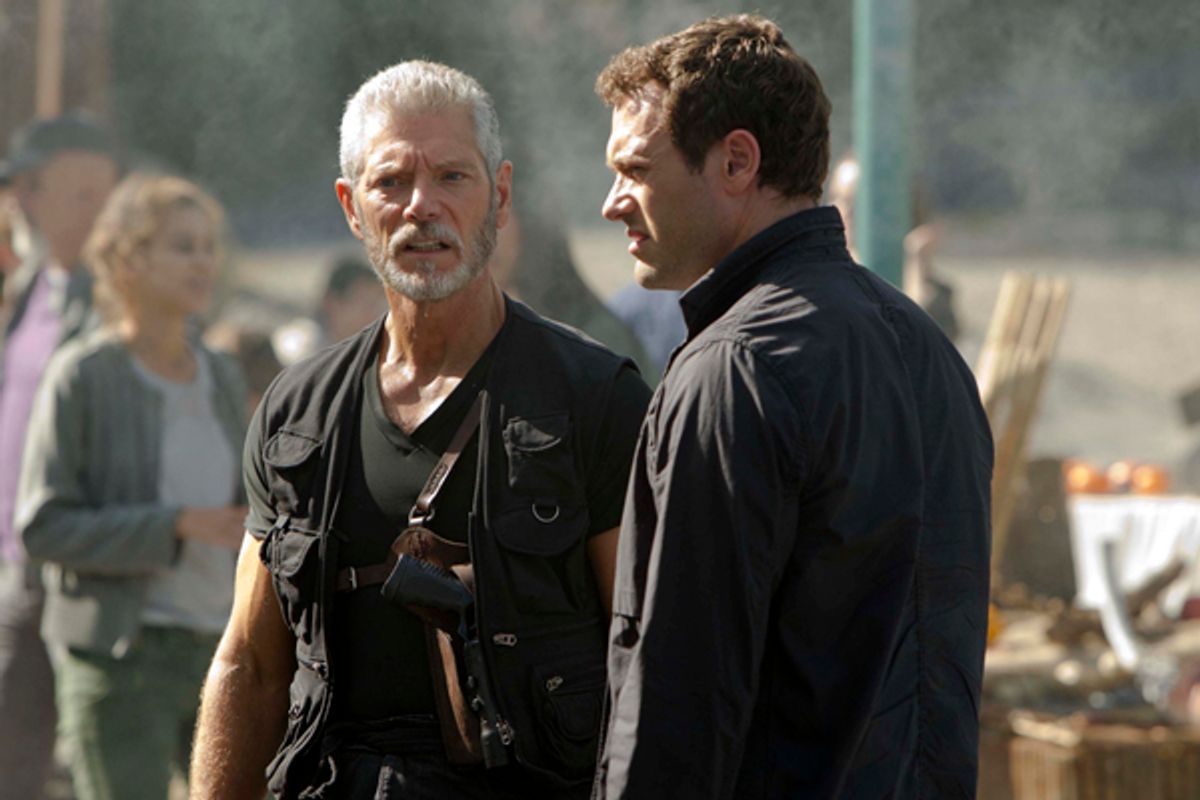 Stephen Lang and the dinosaurs: Those are the only two reasons to watch "Terra Nova." And that's depressing when you consider that the Steven Spielberg-produced science fiction series is the most expensive show on TV right now, and that it's still considered a long shot for renewal even though more worthy network shows -- including NBC's "Community" and ABC's "Pan Am" -- have effectively been canceled.

Last night's episode was solid and surprising, but arriving eight episodes into the series' run, it's meager compensation for viewer loyalty. Lang's character, Commander Taylor -- the first explorer to step through the time rift that let inhabitants of a polluted Earth to colonize an unspoiled, alternate, prehistoric version of their planet -- finally confirmed what viewers suspected and hoped: that he's not such a great guy after all. (Of course he isn't! Why cast the frequently chilling Lang in an unambiguous nice-guy role?) We learned that, like so many colonies throughout real Earth history, Terra Nova is founded on a lie and a crime. That it's a well-meaning lie and a desperate crime doesn't mitigate the feeling that Taylor is one dark hombre, and that the Terra Novans' enemies, a splinter group known as The Sixers, are less an evil force than principled opposition. (I love how they communicate with a spy within the Terra Nova camp via a big dragonfly outfitted with a data chip; here and elsewhere, the series displays a knack for showing you things you've never seen before, anywhere.)

It seems that a few years after Taylor stepped through the portal, a legendary general who's now listed as "disappeared" showed up aiming to relieve Taylor of his command. The general told Taylor that a team of scientists headed by Taylor's brilliant son Lucas were trying to make the time portal work both ways -- an innovation that would allow the inhabitants of polluted Earth strip Terra Nova-Earth of its resources. The general drew his gun, but Taylor drew faster and killed him and buried his body then wrote his son Lucas off as a traitor and banished him to wander the prehistoric jungle. Said jungle is currently festooned with chalk-scrawled scientific blueprints of the two-way time tunnel that Lucas' dad prevented him from finishing.

This twist echoed concerns that I raised in my review of the pilot episode: "Isn’t the Terra Nova project a futuristic version of the American myth of Manifest Destiny, which prizes settlers’ desires over the integrity of a 'new' land and its indigenous inhabitants? According to Spielberg and company, it is morally wrong for humans to treat one version of Earth as a toilet, but OK to slip through a time-space rift, insert themselves into the other Earth’s Cretaceous period, and alter whatever evolutionary process would have occurred if they’d never built cute little cottages there?" Last night's installment, "Vs.," suggested that "Terra Nova" is going to address some version of those questions. Taylor's bloody back story implied that the title colony isn't a 22nd-century Jamestown -- which, if you know history, would have been problematic anyway -- but a beachhead in what was supposed to be the most spectacular rape of natural resources in all of human history. The general's bosses essentially said, "We have shortsightedly destroyed our own planet, now let's try to save it by pillaging an alternate version." Taylor is standing in the way of that scheme. But his murderous stubbornness is hard to defend if you recall images from the pilot that showed a denuded, toxic Earth inhabited by people who couldn't even leave their homes without donning respirator masks. The character has unilaterally declared himself the patriarch of a new civilization -- a guy who's going to do it all over again and do it right, keeping the forces of imperialistic capitalism at bay however he can. Meanwhile, the Terra Nova settlers' loved ones back home are stuck in putrid trash-heap where oranges are considered rare delicacies.

There are no easy answers to this conundrum, and I like that. Good science fiction should leave you with no safe place to stand as you watch the characters navigate their world. The last few episodes of "Terra Nova" have been somewhat darker than the first five, and much less morally clear-cut and comfortable. One episode exposed a legendary and beloved founding explorer-scientist as a research-faking liar, and gave us reasons to sympathize with the former assistant who murdered and impersonated him. Another episode got the the main family's eldest son, Josh (Landon Liboiron), involved in a scheme to steal drugs from Terra Nova and sell them to the renegade Sixers in exchange for importing his girlfriend from dying Old Earth to Terra Nova-Earth. If, indeed, "Terra Nova" is evolving, and becoming a bit less like the original, brain-dead "Battlestar Galactica" and more like the SyFy Channel remake, that's great news for viewers. It's also great news for Lang, whose skill at playing tortured men of conscience, screwed-up visionaries and oddly enjoyable monsters makes him the ideal anchor for such a show.

But even if this recent change in tone sticks, I doubt it'll amount to more than a dash of pepper in otherwise bland stew. With its mostly placid and untroubled nuclear family, "Brady Bunch"-level relationship dialogue, and improbably clean sets and costumes (which say "Hawaiian resort" more than "prehistoric colony"), "Terra Nova" feels as if it was time-warped in from a network schedule circa 1985 or so, when people still sat down in front of their TVs at the same time each night and watched whatever happened to be on.

The very worst episodes of "Lost" were more compelling than the best that "Terra Nova" has shown us to date, and their melancholy undertow, puzzle-box construction and dedication to mystery always gave viewers a lot more to chew on. Supposedly the show isn't going to do more than 13 episodes this season, and those are already in the can. If it does get renewed, maybe series creators Kelly Marcel and Craig Silverstein can light a fire under their writing staff and turn "Terra Nova" into the thought-provoking adventure it should have been in the first place. While they're at it, maybe they can give us an extended flashback to Taylor's Terra Nova origin story and show us how he survived alone in the jungle for months, fending off ravenous prehistoric creatures until reinforcements arrived. That tale, which we first heard in the pilot, is more thrilling to imagine than "Terra Nova" is to watch.