Confessions of a Romney speechwriter

How I discovered that the beautiful, chiseled GOP candidate is actually a synthetic corporation-operated droid 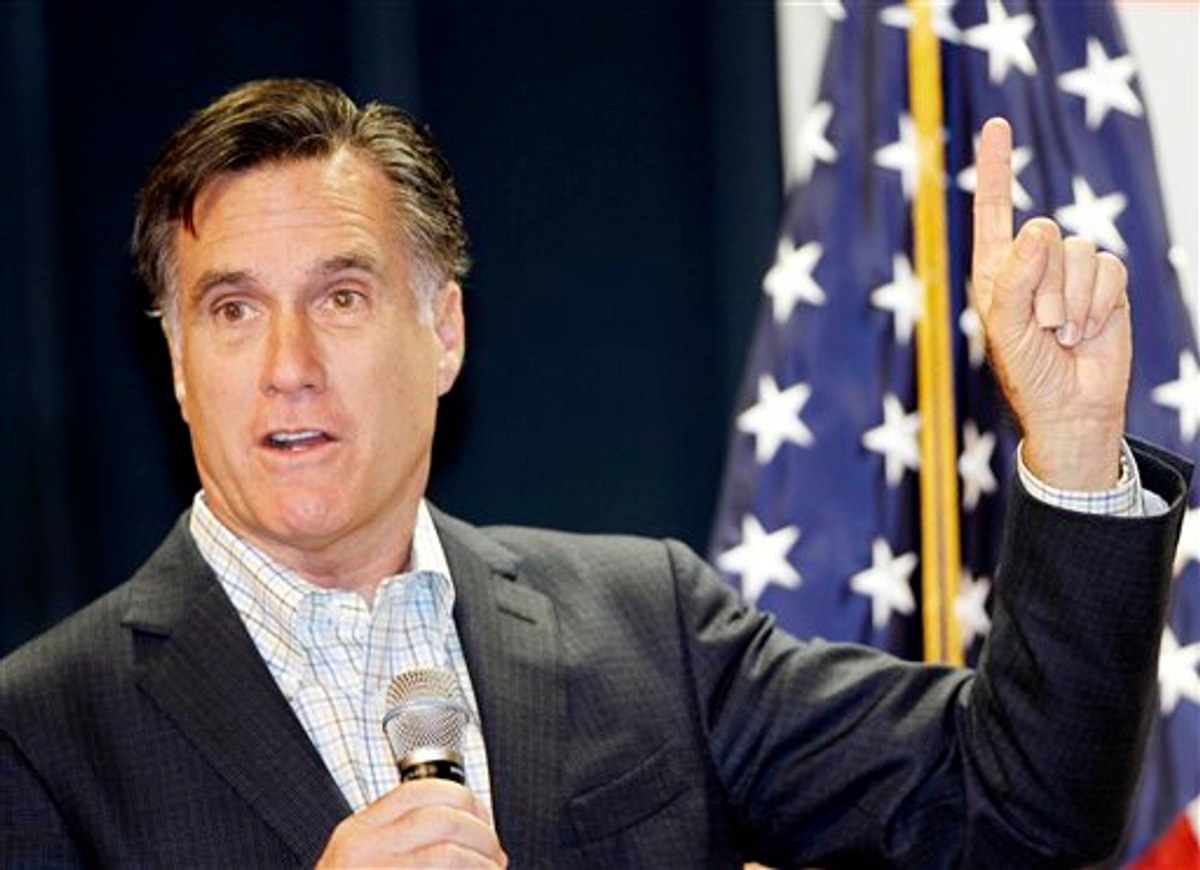 Just as Mitt Romney's presidential campaign was getting off the ground I was hired by the campaign as a kind of junior speechwriter/copy man. On my first day, they gave me a cubicle, a power shake and a black lawn jockey filled with multi-vitamins. The memo on my desk instructed me to write three very different speeches on immigration. It made clear that the candidate was open to everything from "fast-track citizenship to all immigrants with at least three limbs" to "caging these animals next to the highway and encouraging drivers to pull over and pummel them with tire irons." When I expressed concern to my boss, Manager No. 7, he asked rhetorically if Procter & Gamble sells the same kind of toilet paper in Borneo as it does in Albania. I wasn't sure if he was making a strategic point or comparing my writing to crap paper.

I wrote all morning while my assigned "Efficiency Expert" stood over me with a clipboard and stopwatch, calculating my return on labor. At 11:30 he clicked the watch to a crisp stop and said, "Bathroom break. Ten minutes," before pointing with a nipple-size cellphone toward a bank of industrial elevators.

I pressed my thumb against the security sensor and the doors whooshed open. As I descended to the basement a recorded voice said, "Remember, your Efficiency Expert is watching at all times." I looked around for something to do, but the only thing I could come up with was to bend down with a handkerchief and apply a hasty shine to my shoes. When I left the elevator, the voice whispered, "You missed a spot."

I saw no sign for the bathroom so I walked down a long empty corridor that dead-ended into a monstrous entryway shaped like Mitt Romney's head. The damp hair was sculpted ever so beautifully, the powerful jaw chiseled like limestone, and the enormous mouth was wide open, revealing a set of stairs where the tonsils would have been. Each gleaming white tooth was emblazoned with a different corporate logo: everything from Chevron and  Goldman Sachs to Carl's Jr. and Sit-N-Sleep. I glanced back and forth for Efficiency Experts or Hall Monitors and then, assuming the coast was clear, gingerly walked into Mitt Romney's mouth and up through the dark circular staircase.

I emerged onto a Frito-Lay-sponsored landing, which overlooked a plane hangar that hummed with activity.  Small talking machines were descending from the ceiling, conveyer belts were transporting microchips, and lines of men in starched shirts marched past Rupert Murdoch, Michael Ovitz and Dr. Phil, all of whom sat regally atop a glass riser like a trio of grumpy dictators at a military parade. Dr. Phil licked his lips and then turned to a cowering assistant and demanded another tray of dumplings, while Mike Ovitz shouted, "Make that two!" and then itched one of the horns sticking out of his hairpiece.

Just off to the side of me and surrounded by McKinsey types in white lab coats, I spotted Gov. Romney sitting statue-still underneath a rectangular computer that hovered over his head like a Silicon Valley halo.

I crouched down and hid beside a 1-800-GOTJUNK water cooler.  Then I nearly fainted when one of the lab coat guys reached over and took the crown clean off Mitt Romney's head! I expected to see blood or some kind of struggle, but instead, Gov. Romney just sat there with a wondrous smile affixed to his beautiful, hairless face. When they reached into his head and removed a microchip, it finally dawned on me: Mitt Romney, former governor of Massachusetts and candidate for president, is actually a synthetic robot droid owned and operated by a consortium of evil corporations (and Dr. Phil). The microchips that were being removed each came with different labels: "Pro-Choice," "Pro Gay Rights," "Gun-Control," "Higher Taxes" and "No Capital Punishment." The chips were placed in a box that said, "2002 Massachusetts Gubernatorial Campaign."  Ryan Seacrest and David Rockefeller appeared, packed up the box and then wordlessly disappeared behind a billowing Amway curtain.

A new box of chips was taken from the levitating computer and placed ceremoniously into the hands of Jack Welch, who stood there red-faced and drunk wearing a T-shirt that said "He Likes You" with an arrow pointing to his genitals.  The group semi-bowed while Jack steadied himself and inserted the new chips into Mitt Romney's head. "Pro-Guns," "Pro-Life," "No Capital Gains Taxes," "No Gay Marriage," "Death Penalty," etc.

Just as the crown was fastened back onto Gov. Romney's head, they wheeled his wife and sons into the area, unloaded each one and then stood them upright before a huge American flag, which was stamped with a giant image of the Geico Caveman. Then Dick Parsons unveiled a hand-held remote and, after some initial cursing and frustration, successfully navigated Gov. Romney over to his wonderful family of gorgeous droids, each of them dressed in a Christmas sweater and pleated khakis, the smell of apple pie wafting from their groins and underarms. The Romneys clasped hands and in perfect-pitch unison sang "God Bless America" while Donnie Osmond stood off to the side whispering words of encouragement into a microphone affixed to his red, white and blue lapel.

A tear came to my eye and I trembled a bit more than I'd like to admit. I wanted to join in the singing, but I knew I couldn't. I wished I was wearing a Christmas sweater, or maybe a pair of those Romney khakis. The Romneys looked so good I wanted to eat them -- or at least taste them, nibble them a bit. I wanted to be friends with Tagg, the oldest boy. He looked nice. And strong too. I liked his thick eyebrows. I wanted Ann Romney to hold me like an infant and tell me I lived in the greatest country in the world. I wanted Mitt to teach me the art of lifting weights and whisper the word "spreadsheet" into my ear as I fell asleep. Even though I knew they were all synthetic droid robots owned and operated by a consortium of evil corporations (and Dr. Phil),  I couldn't help whispering to myself over and over and over again, "I love these people. I love these people. Holy Mother of Mary, I love these beautiful, blessed people."