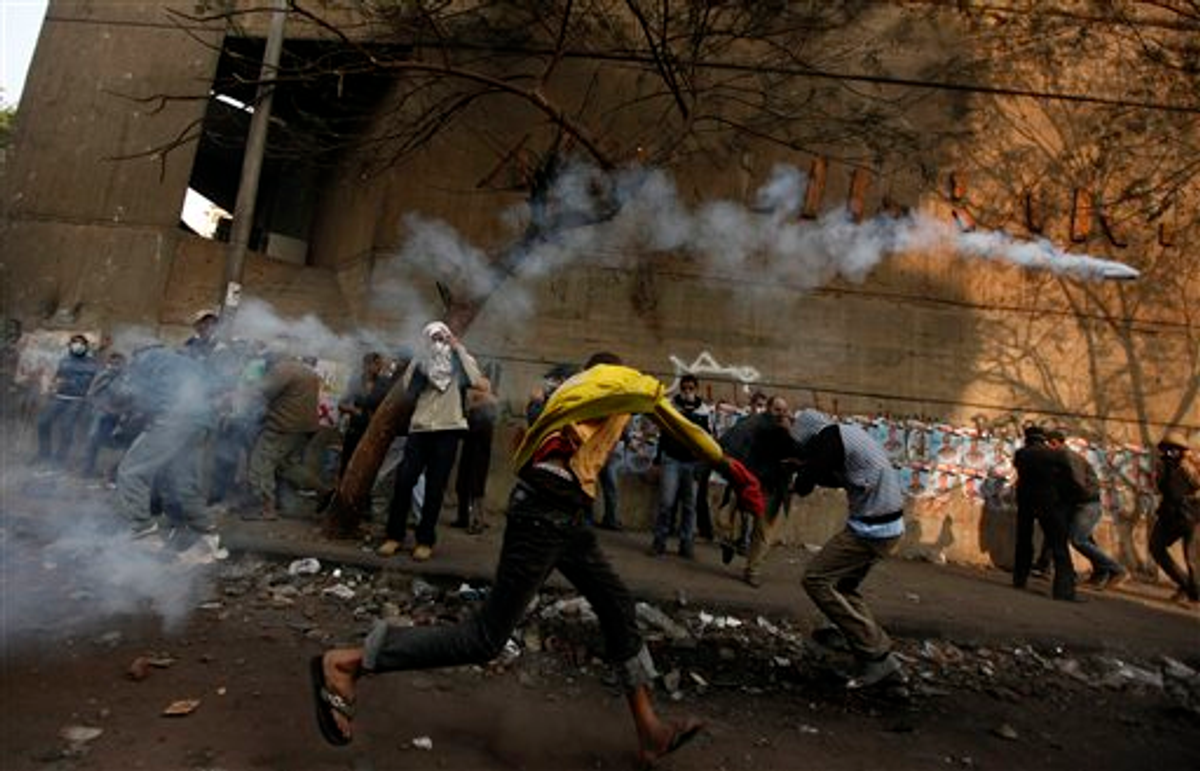 A protester throws a tear gas canister away during clashes with the Egyptian riot police near Tahrir square in Cairo, Egypt, Tuesday, Nov. 22, 2011 (AP Photo/Khalil Hamra)
--

CAIRO, Egypt — Egypt’s ruling military general pledged to transfer political power to a civilian government by mid-2012, one of several concessions that appeared aimed at containing the growing protest movement and prevent a revolt that has raged in downtown Cairo for 5 days from spreading further.

Mohamed Tantawi, the country’s top army commander, who assumed the de facto presidency in February, made the announcement in his first televised speech to the nation.

Tantawi assured the Egyptian people that parliamentary elections would proceed as planned, scheduled to begin on Nov. 28. And he repeatedly promised that neither he, nor anyone in Egypt’s military, would seek for higher office.

“We are not looking into the presidency,” said Tantawi, in a pre-recorded statement on state television Tuesday.

“The Supreme Council of the Armed Forces is only interested in the interests of the people. We don’t care about who will win elections or who will be the next president. It’s up to the people to decide,” he said.

But the proposed concessions failed to quiet protesters on the street, who have now been clashing with security forces for more than 96 hours.

The military also accepted the resignation of the entire transitional cabinet and protesters who had been arrested over the weekend were set to be released. Tantawi also allowed for a civilian inquiry into a violent crackdown at a protest in October that left more than 20 protesters dead on the streets, some crushed under the weight of charging military vehicles.

The stakes, however, became much higher for Tahrir demonstrators following this most recent series of clashes in Cairo, where violence between police and protesters over the weekend led to at least 30 deaths and more than 1,000 injuries.

Many protesters were hesitant to trust Tantawi and an “illegitimate” military government that had failed to put an end to more than five days of non-stop tear-gassing and active conflict on the streets surrounding the square.

Some are even calling for Tantawi to stand trial.

“People are in the square dying and they are talking about another seven months of military rule? We will stay until they leave, but now it’s about when they should be tried as murderers and criminals,” said Mohamed Effat, 22, a protester who was shot with rubber bullets by police on Sunday.

If the reaction in Tahrir was not enough to convince the military of the shortcomings in Tantawi’s speech, they needed only to look three blocks to the east, where a pitched battle between hardcore protesters and armed riot police has been going for five days straight.

The fight turned a few-block radius of downtown Cairo into a virtual war zone. Police and protesters formed ever-shifting battle lines delineated by torched-out car skeletons and blackened sheets of corrugated metal, along a street littered with broken bottles and chunks of asphalt.

By day, the incessant roar of agitated battle cries from both camps was pierced only by the hollow thud of police tear gas canisters and booming shotgun blasts fired into the crowds.

After dark, the unlit streets and shuttered storefronts were illuminated by the bright orange glow of protesters' Molotov cocktail explosions and blazing bonfires, some fueled by wooden desks and chairs from a nearby girls’ school that was looted.

“The police are sons of garbage! This government is garbage!” screamed the enraged protesters on the front lines at Mohamed Mahmoud street, which is just off Tahrir. “Down with military rule!”

Last week, tens of thousands of a mostly Islamist crowd — including the popular Muslim Brotherhood — gathered for a peaceful protest at Tahrir Square to call for an end to military rule. The last straw had been a recent attempt by the ruling generals to slip budgetary immunity for themselves into the future constitution.

The gathering turned violent only the next day, long after most had gone home. A police crackdown on several hundred overnight campers drew only more angry protesters to Tahrir.

Recent street battles near the square underscore the systemic problems with abuse of authority by police forces in Egypt. More than nine months after police brutality fed the flames of January’s uprising, security forces have yet to be reformed.

For many in Tahrir, the sieges over this weekend highlighted in gruesome detail the immediate need for a complete overhaul of the very forces designed to serve and protect them.

Arrested protesters were beaten mercilessly this weekend by police wielding blunt wooden batons, in plain view of the advancing crowds. Dozens of officers swarmed around detainees, attacking with punches to the head and kicks to the groin.

But the feared police are not the only ones in Egypt that may be losing popular support.

Outside of the square, life for most in Cairo has been relatively normal despite the past weekend of violence. Many average Egyptians are eager to see an end to Tahrir protests — and the resulting frontline clashes — even if it means continued military rule.

For most of Egypt’s “silent majority,” stability is the primary concern in a country that has been wracked by economic uncertainty and security woes for the past nine months.

Even several political movements — including the Muslim Brotherhood — have called for an end to the proposed sit-in in Tahrir, hoping to put the good of the country above the possibility for ongoing clashes.

In Tuesday night’s speech, Tantawi left many in the square skeptical that the military would ever cede power completely from a state that has been run by armed forces behind the scenes for nearly 60 years.

Of particular worry to many liberal activists in Tahrir was Tantawi's offer to hold a national referendum testing the public will for a complete military withdrawal to the barracks. The protesters' fear was that a majority of Egyptians might actually vote for the military to stay — giving legitimacy to martial rule.

“The Supreme Council of the Armed Forces... is ready to immediately hand over authority and return to its original task to protect the homeland, through a public referendum, if that is what the people want and if that is what is needed,” Tantawi said.

How elections could proceed next week, amid ongoing violence and the possibility of a Tahrir Square jam-packed with protesters, was far from certain.

Late in the afternoon on Wednesday, an uneasy calm returned to the streets surrounding Tahrir, as police forces finally made a full withdrawal from Mohamed Mahmoud Street.

Hundreds of young protesters milled about the scene of destruction. The road was nearly impassible, littered with rocks, torched vehicles, and at least one broken armoire used as a barricade. Nearby apartments were covered in pockmarks, and a fire still smoldered on the third floor of a building overlooking the rubble.

Many of the protesters were skeptical that any "ceasefire" between the two sides could stick. But they hoped that the worst was over.