Is "Melancholia" a feminist film?

Lars von Trier has said plenty to alienate women. But his depiction of mental illness is vital and groundbreaking 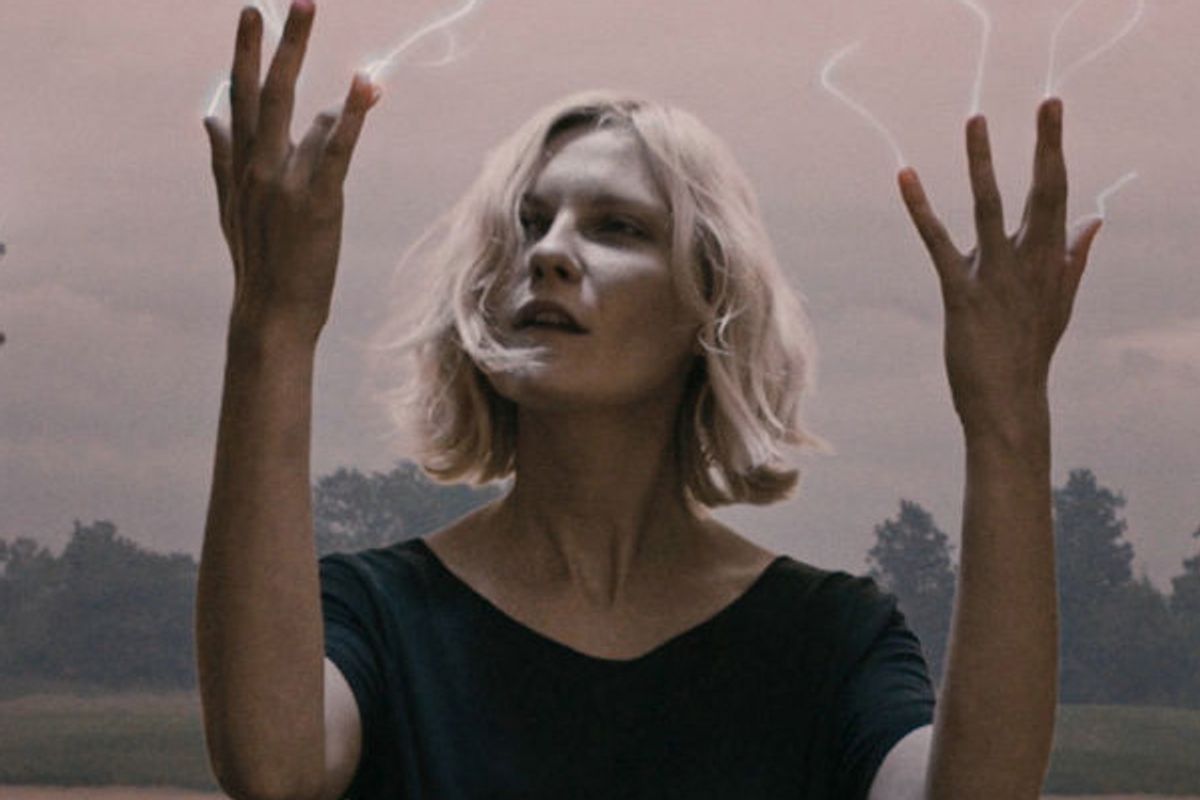 You could say that Lars von Trier does not exactly have a way with the ladies. Maybe it’s because of the reports that he employed a “misogyny consultant” on the set of his 2009 film "Antichrist" whose sole job was to “furnish proof of the fact that women are evil,” or perhaps it was something he uttered in the film’s documentary supplement, charmingly titled "Antichrist: The Evil of Women." It could also stem from the anecdote, recounted in a sidebar of Chris Heath’s recent GQ profile, that on set he referred to Kirsten Dunst’s nude scene in "Melancholia" as “the beaver shot.” Or perhaps we are all still wincing from that infamous image near the end of "Antichrist."

Women are certainly not the only group of people that von Trier has alienated over the years: Add to that list Jews, French people, animal rights activists and other filmmakers (Polanski at Cannes ‘91 comes to mind). But von Trier’s comments about women (of his famously tumultuous relationship with "Dancer in the Dark" star Bjork: “The problem with her is a bit like the problem you have with women – sometimes they do something that you really don’t understand”) have always felt ridiculous – and more than anything, outdated. They smack of antiquated ideas about essentialism that feel terribly out of step with a world that’s more and more begun to think about both masculinity and femininity as fluid spectra rather than diametrically opposing forces. The evil of women. It’s hard to take seriously such a sweeping generalization about gender in 2011.

Still, when I first saw the gorgeous poster for "Melancholia" – featuring a wedding dress-clad Dunst floating serenely in a pond – I winced once again. The image is an obvious allusion to John Everett Millais’ iconic 1852 painting “Ophelia.” Did this mean that the latest von Trier heroine would be a stereotype of feminized hysteria modeled after Shakespeare’s controversial maid? Because, historically speaking, essentialist pontification and Ophelia iconography have gone together like peanut butter and jelly.

“Of all Shakespeare’s female characters, Ophelia is par excellence, the most feminine,” wrote the psychiatrist A.O. Kellogg in 1866. “[I]n her ... we perceive a closer approximation to the divine perfection of a woman than is to be found in any other of the poet’s delineations.” Kellogg’s comments were echoed in that period’s stagings of "Hamlet" (Ophelia’s bawdier lines were often censored) and also in the most widely trafficked images of her. Note, for a representative example, John Bostock’s 1836 popular engraving of Ophelia, which portrays her as a vision of inviting, uncomplicated feminine delicacy.

Many authors and artists at the time seemed to have conveniently forgotten a pretty major plot point in "Hamlet": the part where Ophelia goes mad.

“Female hysteria” was a popular psychological diagnosis in the 19th century; many doctors believed the trouble sprung from a woman’s uterus (think about the etymology of the word "hysteria" – and hysterectomy), and the treatments they administered included pelvic massages and the use of frighteningly primitive electromagnetic vibrators. As literature’s most iconic female hysteric, Ophelia was bound up in these diagnoses. In the early days of photography, Hugh Diamond of the Surrey County Lunatic Asylum was known to dress his patients up like Ophelia (draped clothing, laurel wreaths upon the head) and take photographs of them for medical use, illustrating what hysteria looked like in its “natural state.” Of course, this created a troubling link between fiction and diagnosis for mentally ill women in need of more effective treatment.

Thankfully, we don’t diagnose “female hysteria” anymore. Diagnoses today are more precise, and what we once called hysteria could today be called any number of things: schizophrenia, anxiety, depression.

"Melancholia" is a film about impending apocalypse, but it is also an intimate human drama about depression and the complex relationship between a mentally ill woman (Dunst’s Justine) and her caretaker (her sister Claire, played by Charlotte Gainsbourg). The Millais reference in the poster is only the beginning; "Melancholia" alludes to Ophelia repeatedly. There’s the caustic, wordplay-filled exchange with her boss (Stellen Skarsgard) that’s heavy on the use of the word “nothing” (one of Shakespeare’s favorite double-entendres, as it was also common Elizabethan slang for female genitalia, it’s the key word in the notorious “country matters” dialogue between Hamlet and Ophelia). A few scenes prior, when her depression begins to overtake her on her wedding night (“I’m trudging through this gray, wooly yarn… it’s really heavy to drag along,” Justine tells Claire), she retreats to a room filled with art books and flips them open to images that reflect her distress. Among them is Millais’ “Ophelia,” on which the camera lingers for a moment.

Though now perhaps the most recognizable image in the pre-Raphaelite canon, Millais’ Ophelia was something of a revolution when it was first exhibited. Previous images of the heroine had made a point to avoid disturbing the viewer or complicating his idea of Ophelia’s beauty, but Millais’ painting is full of unease, portraying her hovering between life and death. Some critics were so distressed that they attacked not just the painting but Millais himself: “There must be something strangely perverse in an imagination which souses Ophelia in a weedy ditch, and robs the struggle of the love-lorn maiden of all pathos and beauty, while it studies every petal of the darnel and anemone floating on the eddy.”

Maybe this is why Millais and von Trier seem like kindred spirits. Millais eschewed his era’s clichés about femininity in favor of a more personalized, painstakingly detailed approach, and von Trier does something similar with his depiction of Justine’s illness. In contrast to the cosmic drama unfolding in the sky, von Trier focuses meticulously on the struggle of small actions: Claire helping an ailing and inert Justine lift a foot into a bathtub, or Justine finding the strength to take a bite of meatloaf. It all feels more honest and less seeped in loaded, gendered clichés about “hysteria” than did recent memory’s most widely acclaimed portrayal of a woman suffering a mental illness, Natalie Portman’s Nina in Darren Aronofsky’s "Black Swan."

Von Trier has been open about the fact that Justine is an autobiographical character, springing from his own experience with depression. When he interviewed Gainsbourg recently, Salon's Andrew O’Hehir suggested that von Trier is “extracting the feminine aspects of himself and projecting them onto the screen.” Gainsbourg agreed: “He’s giving the parts to women, but there’s a lot of himself in there.” Perhaps this is why Justine feels like a much more realized and less essentially “feminine” character than the one Gainsbourg played in "Antichrist" (called, appropriately enough, “She”): she is presented to us not as a hysterical woman but as a depressed person.

Hugh Diamond’s portraits of asylum “Ophelias” tell us why honest and precise cultural representations of mental illness are so vital. That is not to say that making it through a screening of "Melancholia" is equivalent to passing the MCAT – however seeped in autobiography, it’s still a work of fiction. But in a society that does not take mental illness as seriously as it should, we need representations that portray depression as truthfully as possible, just as we need female characters who have got more on their minds than shoe shopping.

Some feminists will continue to take issue with von Trier. Heath’s GQ profile comes to a fair conclusion: it’s up to the individual to decide whether or not she can separate von Trier’s character from his art. But those who can separate the film from the ridiculous things he’s said about women might be pleasantly surprised by "Melancholia." James Joyce once remarked, “I am the foolish author of a wise book.” Perhaps von Trier is the misogynistic author of a feminist film.

Lindsay Zoladz has written about arts and culture for Pitchfork, Washington City Paper, Cannonball and many other publications. She lives in Washington, D.C.