The best-selling author talks about introducing his new, hand-picked lineup of favorite books to American ears 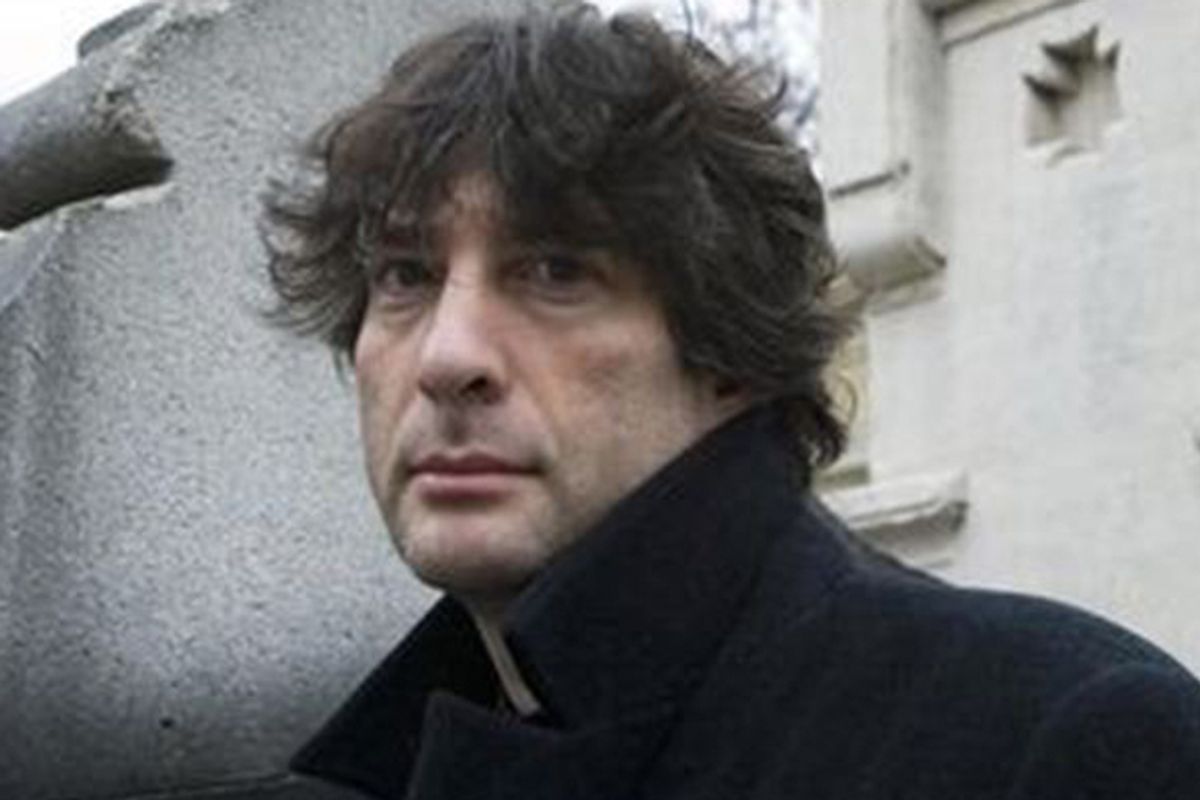 Neil Gaiman's enthusiasm for audiobooks is no secret. The best-selling author has narrated many of his own titles, including "The Graveyard Book," which won the Audiobook of the Year award (from the Audio Publishers Association) in 2009. He's even narrated books by other authors on occasion.

Recently, Gaiman kicked his advocacy up a notch by agreeing to hand-select and produce a line of audiobooks in partnership with the audio download retailer Audible.com. Neil Gaiman Presents released its first five titles last month; they include the novel "Land of Laughs" by Jonathan Carroll and "You Must Go and Win" by musician-turned-essayist Aline Simone. Future releases will include books by the early 20th-century American author James Branch Cabell (the target of a once-notorious censorship suit for writing an "offensive, lewd, lascivious and indecent book") and "Dimension of Miracles" by Robert Sheckley, a work Gaiman likens to "A Hitchhiker's Guide to the Galaxy," and which will be narrated by television personality John Hodgman.

Most omnivorous audiobook consumers have been frustrated by the relatively limited selection of available books (especially if you're looking for something besides best sellers). Neil Gaiman Presents is part of a larger enterprise by Audible.com, called ACX (for Audiobook Creation Exchange). It aims to bring new titles to the public by hosting a service through which authors (and other rights holders) can connect with professional narrators.

"The short-term reason I got involved with ACX," Gaiman told me, "is that there are books I love that I want to bring to the world. The long-term reason I signed up is because I want to live in a world where every book that exists has a great audiobook." I telephoned him to find out more about Neil Gaiman Presents and why it's been so difficult to get a wider variety of audiobooks to the ears of America's readers.

Have long have you been an audiobook fan?

I remember at age 9 or 10 staying up to catch the BBC classic serial of "Mansfield Park" on Radio 4. They'd do 15 minutes a night. I just thought it was a great story. I had no idea who Jane Austen was.

I got my second wind when CDs started coming out. Before that, the packaging had made things so unwieldy. You'd have these huge things with cassettes in. The first giant CD thing I bought was Stephen King's "Bag of Bones," read by Stephen King, which was a 20-CD set. The problem with that was that they were $60 and you'd only play them once.

In 2003, I was told by an audiobook publisher I'd met that they probably had at most a year until the audiobook division of this publisher would be closed down for good. The economics didn't work. The tragedy was that the packaging was what was killing them. Then I saw my first iPod and thought: You know, I don't think it's as dead as they think.

Did you always read your own work?

As long as they would let me. The ones I didn't read, I didn't read for a reason. I didn't do "American Gods" because -- as was demonstrated on "The Simpsons" last night -- you don't want to ask me to do even a bad American accent. You do not want a story that is meant to feel absolutely accurate in terms of place to have an English person doing his idea of an American accent.

Then there's "Anansi Boys," my favorite audiobook of all of my stuff, partly because I imagined [actor] Lenny Henry reading it while I was writing it. And partly because there is no way on God's green earth that I'm going to do an audiobook that has four little old Jamaican ladies in it. I still tell people that if they like "Anansi Boys," the real version of it is Lenny reading it. That's the author's preferred text.

How did Neil Gaiman Presents come about?

Basically, what Don Katz [CEO and founder of Audible.com] said to me was, "How would you like your own record label? We need a Judas goat" -- actually, he didn't say Judas goat; I did, because it's a fun word -- to lead these other authors and show them it's not scary. And not just authors. Agents and publishers also have these rights and could be doing this.

Why is there so much hesitation?

For me, the tragedy of audiobooks is that the physical limitations and impossibilities of putting out complete novels as audiobooks in the days of LPs and then pretty much in the days of cassettes, meant that the costs and the odds were always against you. Most books aren't out as audiobooks. If you like a book, it's probably not been done as an audiobook.

That is the problem that ACX was created to solve -- and for me it's also the problem that it's highlighting. I'm hitting it more and more. All I know is that there could be lots and lots of audiobooks out there that aren't. For years it didn't matter that the rights were held by people because nobody could do anything anyway. But we're not in that world anymore.

Did you start out with a list of titles you'd always wanted to see adapted? I know I have quite a few.

I had authors and titles. There's an amazing number of them where we're still looking for the rights. With some, I contacted the author and the author said, "Sure," but we're still down the rights rabbit hole with agents and publishers trying to figure it out. The first five books that have come out on Neil Gaiman Presents have simply been the first five books that were ready. I went out to a huge bunch of authors of books I liked to see what we could see.

And you found all the narrators through the ACX exchange?

In one case, I cheated and leaned on a friend. That was for "Dimension of Miracles." It's such a great book. There is no one who likes "A Hitchhiker's Guide to the Galaxy" or who cares about what Douglas Adams did who wouldn't enjoy it, but I needed a voice for it that is as iconic as Peter Jones' or Stephen Fry's -- a voice that would have that kind of quality, but also be American.

The book begins on Madison Avenue in the early '60s. I thought: Who could give me that iconic voice, with the urbane, American quality it has to have, and who can deadpan a joke as well as Stephen Fry or Peter Jones? So, naturally, I thought: Hodgman. And I leaned on him, which consisted of saying, "Will you do this?" He had never read the book, so was astonished by it, loved it and immediately understood why I'd asked.

Did you have a concept for the collection as a whole?

I love the fact that I'm bringing Jonathan Carroll to wider audience who might not otherwise know his work. I've loved Jonathan Carroll's work for 20-something years. But I don't expect that everyone who likes Jonathan Carroll's "Land of Laughs" is also going to like M. John Harrison's "Light," a challenging, weird work that in many ways defines what's most interesting about early 21st-century science fiction. It's a challenging novel and it's not about falling in love with characters.

I imagine there are some books that will never be adapted for audiobook -- like Tom Phillips' "Humument." But apart from that, I'd like to think there will come a day when pretty much anything that was published in prose or in poetry you can listen to.

There are those who would say that that's not "really" reading.

I remember reading a piece by Harold Bloom where he explained that audiobooks were not books because the proper experience goes in through the eyes. The reading experience is only an ocular experience, not an auditory one. That had me sitting there thinking about old John Milton, who obviously was not a proper writer at all because he couldn't even see what he was writing. He was dictating it to his daughters who wrote it down. What kind of a faux poet was he?

What I realize when I'm doing an audiobook is that I actually have a much closer relationship to the text than I do when I'm reading. There's no temptation to skim. You often notice things that the author in all probability thought he or she had buried brilliantly in the text, sitting there in plain sight. I first noticed this phenomenon when I was reading Diana Wynne Jones' books to my daughter. I normally get to the end of a Diana Wynne Jones book and think, "What just happened?" and have to flip back to figure it all out. We weren't getting that because I was reading it aloud and everything was there for you.

Audiobooks have certainly become a lot more popular of late.

People are really busy. One of the joys for me of audiobooks is that you can do them while doing something else. I no longer have commuting time anymore. The evil nature of email is such that simple downtime tends to fill up with people needing things from me. Writing time is at a premium. I'm no longer doing many long drives.

So my reading time becomes my exercising time. I lost 30 pounds on "Bleak House" earlier this year. That was awesome.

Can you talk a bit about the importance of the right narrator, and how much that person can add to or subtract from the audiobook experience?

I remember once talking to a best selling author about audiobooks. He'd written a book that was narrated by a 20-something black male and the audiobook was read by a 50-something white female. He had no say in this and after listening to it for five minutes he stopped, feeling physically sick.

In some cases, when the author is alive and available, I cede that choice to the author. I become the production entity and I'll cast a deciding vote if the author says it's between three narrators he or she likes equally. If the author's alive, I want the author happy. That's the most important bit.

Narrators have a huge part to play. With one of the authors we're doing for Neil Gaiman Presents, James Branch Cabell, the first round of auditions were all from actors who clearly thought, "This is a work of fantasy and there's magic in it, therefore I have to do this in English accents and everything has to be portentous." I listened to seven people in a row kill every joke on the page by not noticing it was there.

It was the only case in which I had to write a little essay, saying "Look, this is a cultured Southern gentleman making jokes, occasionally quite filthy ones, with a completely straight face and with gentle irony." I listened to another four or five auditions after that and the one that made me say, "You!" was the first time it was funny. I was laughing at the jokes. Finally I could hear them.

Even though it's the exact same words. It's remarkable how much the reader contributes.

I had something like this deciding between 17 different versions of "Bleak House."

Which one did you end up picking?