The GOP needs a brokered convention 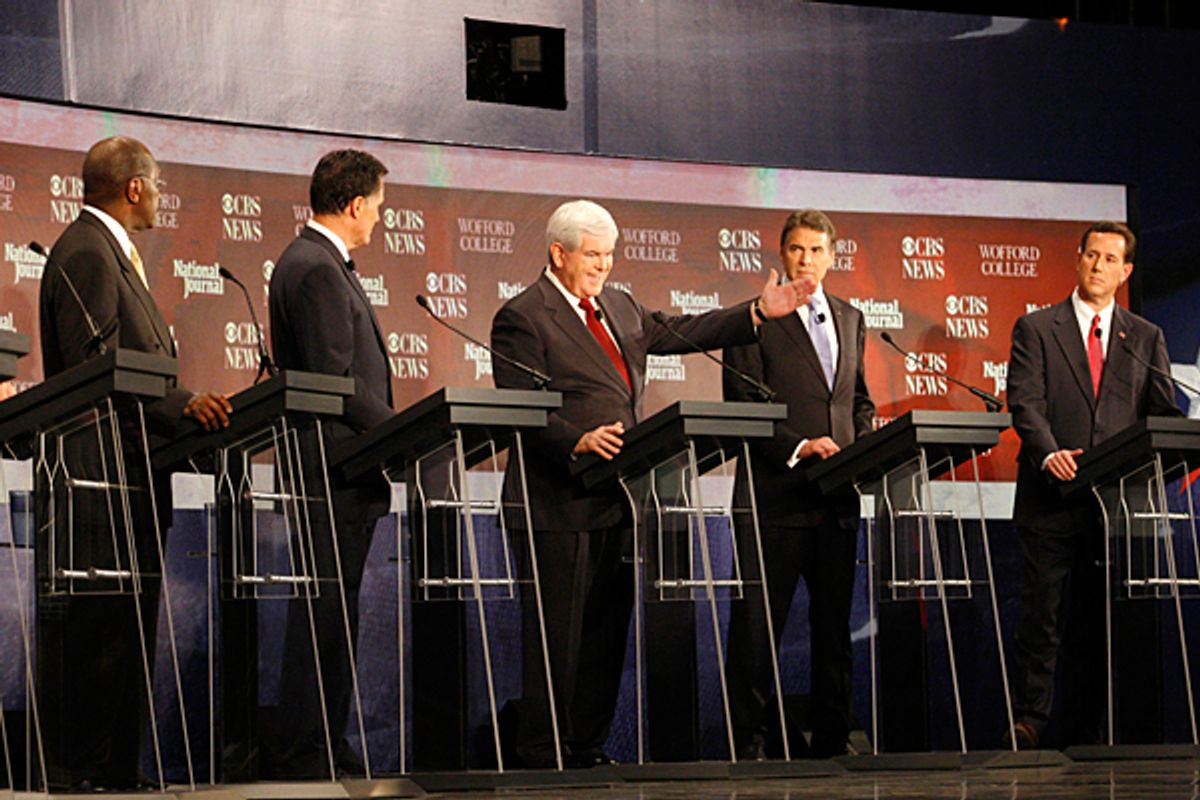 It has been a tumultuous year for those eager to handicap the 2012 GOP race for president. The leaders in the national polls have included Donald Trump, Mike Huckabee, Sarah Palin, Chris Christie, Rick Perry, Herman Cain and now Newt Gingrich. This weekend the former House speaker became the sixth Republican candidate to lead an Iowa caucus poll.  And all the while, Mitt Romney has loomed as the realist's choice to become the party's nominee.

But all of these polls and pronouncements have overlooked the most popular choice for the Republican Party's  presidential nomination: no one. As Republicans make their way toward their quadrennial meeting  in Tampa, Fla., which opens on Aug. 27, 2012, the lack of consensus may be building toward a historical surprise: a brokered convention. Such an event hasn't been this likely in decades.

It is true that neither party has seen a multi-ballot vote to nominate a presidential candidate in more than a half-century. Adlai Stevenson won the 1952 Democratic nod on the third vote, and no Republican has required more than one round since Thomas E. Dewey in 1948, also on the third ballot.

However, a combination of the lack of strength within the current field, the inclinations of current GOP primary voters, the recently changed 2012 GOP rules, and even the best interests of the party itself all point to a strong possibility that there will be no presumptive nominee ahead of the convention.

Let's start with the field itself. Mitt Romney has been the likeliest nominee in the eyes of many, given his stellar fundraising and organization. He finished second to Sen. John McCain, the 2008 nominee, and his challengers have self-destructed, one after another. Despite antipathy from some within the party, why shouldn't Romney be next, just like McCain or 1996's choice, Bob Dole?

The reasons are legion, of course. Since John McCain was defeated by Barack Obama, GOP politicians from Charlie Crist to Mike Castle, Lisa Murkowski to Jane Norton have discovered that even in statewide campaigns, it is nearly impossible to win a Republican nomination without earning the love, or at least avoiding the enmity, of the far right.

Romney has certainly internalized that lesson, dutifully signing Grover Norquist's pledge and repudiating Obamacare in the strongest possible terms. Yet his tenure as Massachusetts governor, complete with a healthcare reform program that served as a template for Obama's Affordable Care Act, serves as a deal-breaker for the conservative voters he'll need when Iowa starts voting on Jan. 3, 2012. Romney remains stuck at about 25 percent in the polls, meaning three out of four Republicans reject him. With six weeks to go, Romney is running out of time to convince the voters to fall for him, and not for lack of trying.

Nor has the predicted stampede of GOP establishment heavyweights to Romney's side come to pass. George Will called Mitt Romney “the pretzel candidate” last month; Bill Kristol declared in his most recent column that Romney was not "inevitable" but, in fact, very “evitable."

Less noticed, but no less important, is the new GOP voting system, which is set up for early primary and caucus states to vote first, followed by all other proportionally allocated delegate states next. From April 1 on, the winner-take-all primary and caucus states will vote. That means a weak front-runner can earn victories in early states without taking a commanding share of that state's delegates, while several challengers can lose, but still rack up a decent delegate total.

Ron Paul, for instance, is often overlooked by the media as a factor because his ceiling of support in the polls appears to be between 10 and 15 percent. But since his floor of support isn't far below that, he will be able to pick up a chunk of delegates who won't be available to  Romney. The same will be true for Michele Bachmann and Rick Perry if they stay in the race -- and the latter has plenty of cash still on hand.

For the very earliest states, this was true in 2008 too. The early primaries and caucuses allocated delegates proportionally, so winning them meant less in terms of amassing convention delegates, and more in terms of building a sense of momentum for the next round of voting in states that were nearly all winner-take-all. For example, McCain's 5-point win over Romney in New Hampshire on Jan. 8, 2008, yielded only a 7-4 delegate edge.   But his victories later that month in South Carolina by 3 points and Florida by 5 points captured 75 of the two states' combined 81 delegates.

No such mechanism exists for any candidate in the 2012 race. Thanks to the new GOP rule,  any primary or caucus held before April 1 must allocate delegates proportionally.

So when McCain won nine of 21 states on Super Tuesday (Feb. 5), with more than 50 percent of the vote in just three of them, the winner-take-all system gave him 608 of the 1,081 delegates at stake on the day. That meant total delegate haul -- more than 56 percent of those available -- was greater than his share of the vote in any single state that day. It also meant he received more than 57 percent of the delegates he'd need to be nominated in a single day. The result? Mitt Romney quickly called it quits, while Mike Huckabee continued on, but without any real attacks on McCain. The GOP race was over on Feb. 5.

The mathematical implications are stark. Take Missouri, for example, which votes on March 17, 2012, meaning its delegate will be allocated proportionally.  Back in 2008, Missouri was winner-take-all. On the GOP side, John McCain edged Mike Huckabee and Mitt Romney in a tight three-way contest, 33 percent to 32 percent to 29 percent. Despite the narrow win, McCain took all 58 of Missouri's delegates.

Fast forward to 2012. If  Mitt Romney performs as well in Missouri as McCain did in 2008, a big if, he would gain fewer than 20 delegates from the state. More to the point, the candidates collectively known as "Not Mitt Romney" would gain 38, making Not Mitt Romney the big winner.

But Not Mitt Romney won't be on the ballot, right? Well, yes and no. Several candidates who aren't Mitt Romney are likely to be on the ballot in all 50 states. If a majority of the party agrees on nothing more than Not Mitt Romney, the real Mitt Romey cannot enter April with a majority of delegates. If Romney is able to climb to even 30 percent nationally in the pre-April states -- something he hasn't done in a single national poll -- and wins a corresponding percentage of the vote, he would still have only 349 delegates. That means he would need to capture 868 of the 1,217 winner-take-all delegates to capture the nomination through the primary process. His only hope is that the other candidates have dropped out.

But why should they? The Not Mitt Romney candidates would need to win just 350 delegates after April 1 to deny him a majority of delegates. How Romney avoids that fate is even less clear. Even he wins every state in the Northeast and the West where he is strongest, he still has a big challenge.

Romney is  a tough sell in the South and the Midwest.  In Ohio (66 delegates, June 12), for instance, Romney trailed Herman Cain last month, 34 percent to 19 percent; he was the second choice of just 13 percent of other voters. Romney lagged in third place last month in West Virginia (31 delegates, May 8), Nebraska (35 delegates, May 15) and North Carolina (66 delegates, May 8), trailing both Cain and Gingrich. In those states polls show Romney winning 16 percent, 13 percent and 17 percent of the vote, respectively. Those four states alone represent 187 of the 350 the Stop Romney forces will need -- again, assuming Romney can even manage 30 percent of the vote through March 31.

And, if they do, why exactly would the party leaders step in to save Romney's nomination? Rather than settle for a nominee incapable of generating enthusiasm, they could use the convention to find a candidate more in tune with the Republican voters.

The GOP leadership and the rank and file would have the opportunity to nominate a compromise candidate who hasn't been in the race at all: John Thune, Chris Christie or Jeb Bush, someone who can cite Romney's unpopularity and moderate record as the basis for breaking their previous vows not to run. Suddenly, the Democrats would face a fresh conservative face who would receive just two months of scrutiny before Election Day.

And running against a president saddled with mediocre approval ratings, whose reelection prospects seem largely buoyed by his uninspired opponents, the Republicans would go into the general election with a sense of dynamism, not disappointment. A brokered convention in Tampa is shaping up the GOP's best-case scenario.

Howard Megdal edits PerpetualPost.com.. He writes for Capital New York, The Journal News, MLB Trade Rumors and many others. His new book, Wilpon's Folly, will be published by Bloomsbury in December 2011. Follow him on Twitter @howardmegdal.