The weakness of Obama's strength

The president's image of national security success shows how little he has changed in U.S. foreign policy 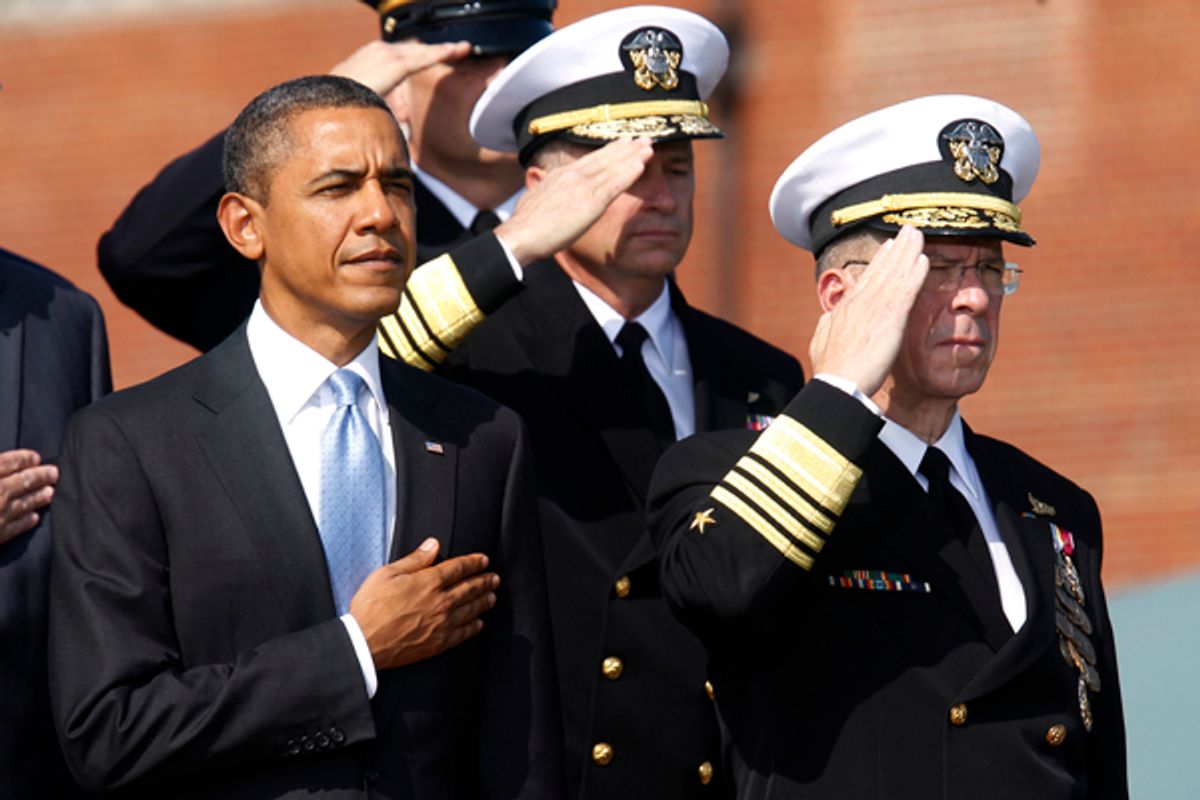 From Adlai Stevenson in 1952 to John Kerry in 2004, Democratic presidential candidates have usually been seen by voters as weak on the crucial issue of national security. Now, that seems to have changed, with defense becoming arguably President Barack Obama’s strongest asset in his 2012 reelection campaign. “Polls show voters believe Obama is handling the title ‘commander in chief’ better than other aspects of his job,” as USA Today bluntly put it last month.

Some Democratic pundits are giddy at their party’s turnaround on national security. "There's no doubt Obama's had a better first term in the White House on foreign policy than any Democrat going back to Truman, and frankly better than most Republicans' first terms as well," crowed Michael O’Hanlon of the Brookings Institution. Michael Tomasky has argued that Obama is on his way to being “not just a good but a great foreign-policy president.”  Michael Cohen made a good case in Foreign Policy for the Democrats being “the new national security party.” In other words, Obama has reversed decades of public perception about Democratic weakness, and it is time to uncork the champagne.

Not so fast. While it is welcome news to those of us who prefer the Democratic Party on domestic issues that it has finally neutralized Republicans on the crucial issue of national security, two problems persist. First, Obama’s popularity on foreign policy has come at great cost. Second, if the Dems exploit their national security advantage in the 2012 campaigns, they may be committing themselves to a permanent "Republican lite" agenda on the issue. American foreign policy still contains strong elements of militarism, interventionism and special-interest influence. Only if and when President Obama cures those underlying diseases can he be considered a great foreign-policy president.

Start with Obama’s national security track record. Obviously, it is far better than President George W. Bush’s, a low bar. Of all the post-Truman Democratic presidents, Obama’s tenure is equaled only perhaps by JFK’s. Successes have included the killing of Osama bin Laden, the downsizing of the American presence in Iraq, presiding over the relatively orderly exit of Hosni Mubarak in Egypt, and backing the removal of Gadhafi in Libya without sending U.S. troops. Obama and the Democrats deserve credit for laying the groundwork for a withdrawal from Afghanistan, and in showing the American people that diplomacy and multilateralism are not curse words but common sense. Most recently, the administration has begun paying more attention to Asia, where America’s attention should really be focused.

But these victories have been accompanied by significant failures. Obama’s escalation in Afghanistan was a predictable fiasco. His inability to turn the U.S. into an honest broker between Israel and the Palestinians is probably the proverbial final nail in the coffin of the so-called peace process. Obama never made clear how intervention in Libya was a vital strategic U.S. interest, and his engagement with Iran was halfhearted. Most disturbingly, from Guantanamo Bay to military commissions, the administration has continued many of the worst civil-liberties policies of its predecessor. And it is has even added some of its own in the form of stepped-up drone attacks, which not only kill scores of civilians but are vital in turning Pakistanis in crucial areas against the United States.

More broadly, Obama has been unable to fundamentally reorient U.S. foreign policy away from intervening in every region across the globe. The administration has not persuaded Americans that restraint would be both a wiser and more just approach to international affairs. It has not made the case that American exceptionalism is just a nationalist myth common to most nations. Instead, Obama has largely been successful in convincing the public that America can better dominate the world with something of a lighter touch.

If Obama and the Democrats rely on this approach in hopes of keeping the presidency and gaining seats in the House and Senate, they may only be extending America’s chronic foreign policy problems. If the administration does not even try, let alone succeed, in telling the American people that their defense budget is bloated, that the country must be much more selective in engagement across the world, and that civil liberties should be more than just an afterthought when conducting international affairs, all triumphs will be partial at best. Yes, Obama has proven terrific in regaining the national security edge the Democratic Party has relinquished for so long. And yes, that pays great dividends in both implementing the Democrats’ domestic policies and in turning Americans against the hyper-nationalist and -militaristic positions that defined the George W. Bush administration.

But we have seen the movie before. Lyndon Johnson’s administration was so obsessed with appearing soft on national security that this fear played no small part in embroiling the country in the disastrous war in Vietnam. More recently, many Democrats voted in support of the Iraq war for fear of seeming soft on the war on terrorism. Though Obama seems far too shrewd to engage in any quagmires of that scale, obsessing about electoral advantage has undeniable costs.

“Since at least the 1990s, the Democrats have embraced the premises of the GOP in national security,” says Julian Zelizer, author of "Arsenal of Democracy: The Politics of National Security -- From World War II to the War on Terrorism." “It’s about being tougher and more aggressive, not about international cooperation or dialogue with other countries.” Branding themselves as the "tough" party on national security is tempting, but if it prevents the Democrats from offering a genuine alternative to the current Republican Party, it may be too great a cost.

And therein lies the difficulty for Democrats, of course. Human nature presents challenges for any leader hoping to illustrate the counterintuitive reality that military power and obstinacy are actually only of limited use in the conduct of foreign policy. "When people are insecure, they'd rather have somebody who is strong and wrong than someone who's weak and right," President Clinton famously said after the 2002 midterm elections. Though cynical, Clinton was correct in his assessment. “It’s hard to tell people that you’re against being strong -- the rhetoric sounds too good, even when the results aren’t,” says Zelizer, a professor at Princeton.

Obama has admirably succeeded in regaining the national security electoral edge from Republicans, who are still committed to pursuing hawkish policies even though they’ve been shown repeatedly to be wrongheaded. But success comes with its costs. When, and only when, the Democrats wean America off its addiction to global dominance can it truly claim to be a great party on national security.