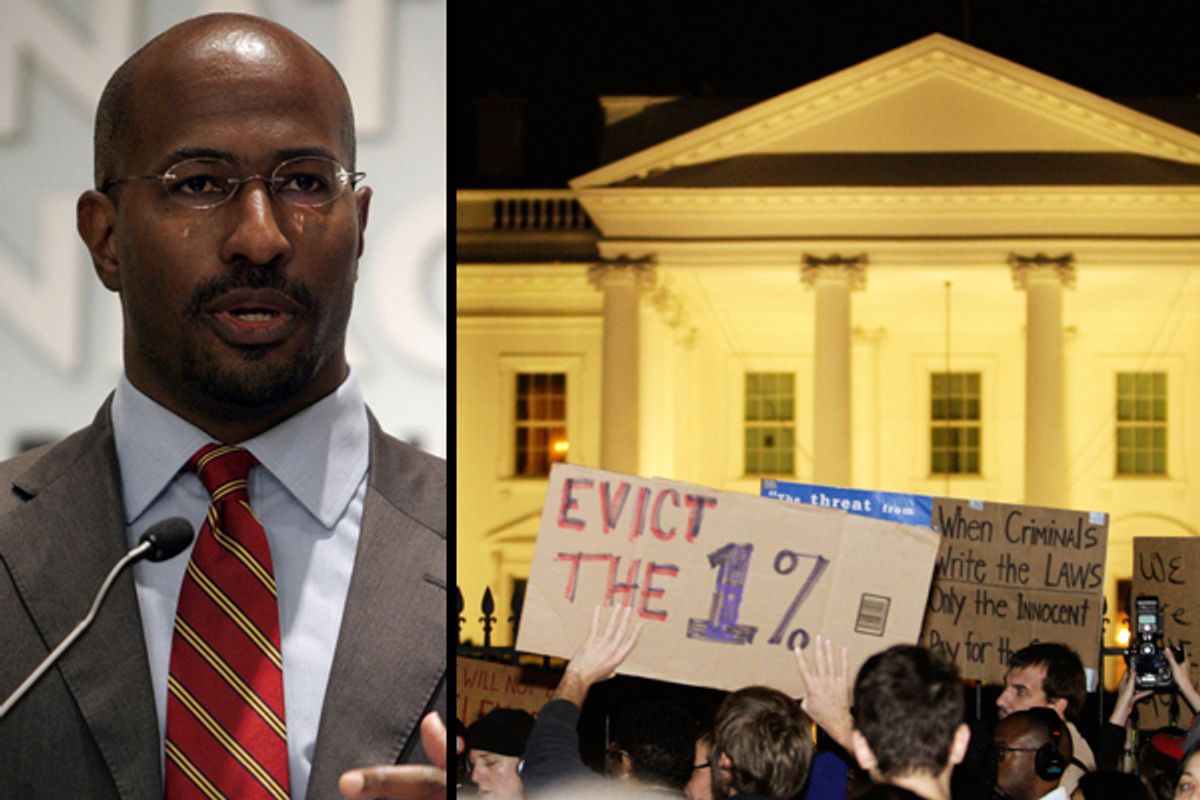 The corporate media seems to want to anoint a leader of the Occupy Movement, namely former Obama administration official Van Jones, now leader of the Rebuild the Dream organization.

When CNN's  Suzanne Malveaux suggested to Jones last week that he might be a “leader” of the Occupy Movement, Jones demurred saying, “There are a lot of us,” and that the movement is “leader filled.”

“All right, Van Jones, you might at least be a spokesperson, you know, maybe not a leader, but certainly a good spokesperson for the group," Malveaux replied, according to a transcript, thus expressing the desire of the corporate media to appoint our leaders. Like Time magazine, CNN wants to make Jones a spokesperson for the movement. (Conservative commentators also find Jones useful as a straw man/leader whom they can attack.)

In fact, Jones, who received a golden parachute at Princeton and the Center for American Progress when he left the administration, is doing what Democrats always do: trying to co-opt the movement. Jones sees the energy of an independent movement and is racing to the front of it, in hopes of leading it down the familiar dead end path of electoral politics and essentially destroying it. While Jones and other Democratic Party front groups pretend to support the Occupiers, their real mission is to use it for their own ends.

As Glenn Greenwald noted in a recent Salon article, “White House-aligned groups such as the Center for American Progress have made explicitly clear that they are going to try to convert OWS into a vote-producing arm for the Obama 2012 campaign.”

Before the Occupy movement emerged, Jones said the first task of  Rebuild the Dream was to elect Democrats. Now he urges the movement to make a “pivot to politics,” claiming there will be 2,000 “99 percent candidates” in 2012. These Democrats will be rebranded as part of the 99 percent movement, just as Republican operatives rebranded corporate Club for Growth spokesmen as Tea Party candidates in 2010. (Exhibit A: Sen. Pat Toomey  before and after.) Even the Rebuild the Dream website has been rebranded as an Occupy movement site.

Jones' call for the movement to “mature" and move on to party politics would only make us a sterile part of the very problem we oppose. As I learned working on Ralph Nader's presidential campaign and running for the U.S. Senate in Maryland, the electoral system is a mirage where only corporate-approved candidates are allowed to be considered seriously. At Occupy Washington, D.C., we recognize that putting our time, energy and resources into elections will not produce the change we want. What we need to do right now is build a dynamic movement supported by independent media that stands in stark contrast to both corporate-bought-and-paid-for parties.

Democratic operatives want to steal the energy of the Occupy movement because they do not have any of their own.  These front groups operate within the confines of the two-corrupted-party system and their agenda is limited by what big business interests say is politically realistic. Rebuild the Dream is more of the same that has been seen over and over from groups like MoveOn and Campaign for America’s Future. "Elect Democrats" is their mantra; indeed, it is their only program -- and it is bankrupt. If it wasn't, there would be no need for the occupation movement.

Democrats need to derail and co-opt the Occupy Movement because it calls attention to their failure. The American people need a real jobs bill, not one that is merely a political tactic for an election year. We need a truly progressive tax system -- one that taxes wealth more and workers less. The poorest Americans pay taxes on necessities like food and clothing, so why is it that neither party urges a tax on the purchase of stocks, bonds and derivatives -- a tax that could raise $800 billion over a decade? And finally, we need an end to the wars and militarism maintained and expanded by both parties, bringing huge profits to the arms industry and immense suffering to millions.