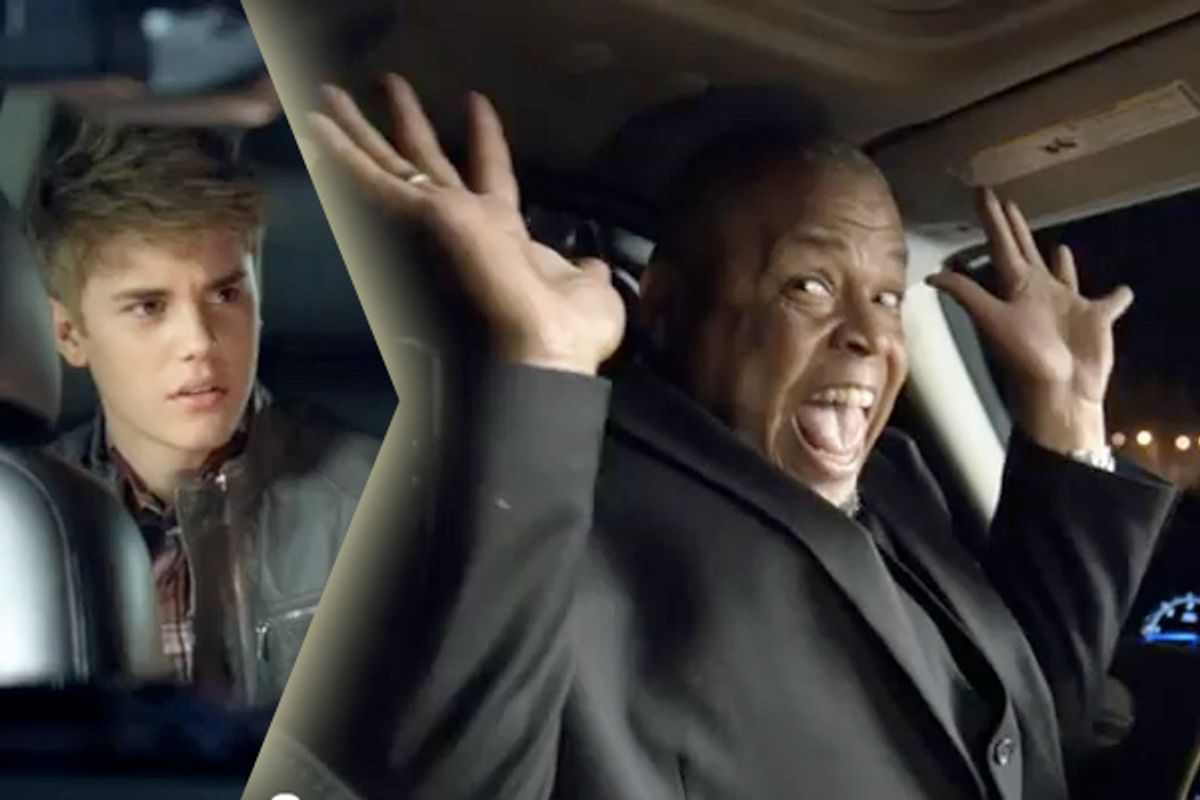 Here's a Thanksgiving recipe guaranteed to deliver a nervous breakdown impervious to even the most bleeding-edge psychopharmaceutical wonder drug. Go to YouTube, search for "Black Friday commercials," start watching, and then, once you've sated yourself on grown men screaming at Justin Bieber, remakes of Rebecca Black's "Friday," and, most distressingly, the continuing adventures of the Crazy Target Lady, ask yourself this question:

I stared into this heart of retail panic darkness, and the more I clicked and pondered, the more confused -- (mind-boggled? fascinated? flabbergasted?) -- I became. The Crazy Target Lady, so proud of her OCD -- obsessive Christmas disorder -- is not funny. She's scary. She's why people trample each other to death. She is wrong.

There is a point in our culture beyond which camp and kitsch no longer make the least ironic sense, where consumerism loses its last mooring to civilization, where even seemingly legitimate protest devolves into farce. That point is Black Friday.

Let me be clear. I am not opposed to vigorous sprees of retail spending. For the sake of the U.S. economy, I would love to see a robust Christmas shopping season and I plan to do my part. I find the notion that we should "occupy Black Friday" and withhold our consumer dollars as a way of hitting back at the 1 percent just nutty. Voluntarily subtracting demand from the economy hurts us. A general consumer strike would result in more layoffs and pay cuts and bankruptcies and foreclosures. Sure, Wal-Mart would take a hit, but so would Wal-Mart employees.

But there's also a point where healthy consumerism becomes out-of-control marketing-driven commodity fetishism, and when we find ourselves checking our smartphones for last minute online deals while standing in line for a chain store opening at midnight on Thanksgiving, we are clearly too far gone. That's insanity.

And corporate America knows this. The retail moguls are counting on it. They are outright encouraging it -- and role-modeling the appropriate behavior for us. The Crazy Target Lady is not a joke. Watch her cannibalize her gingerbread man, or strategize her reverse psychology shopping techniques, or show off her shopping utility belt: You cannot avoid the dual conclusion that a) she is not a healthy woman, and b) she is America. She might be a lunatic, but it's a culturally approved lunacy -- the kind that keeps the American engine of capitalism all stoked up. The message that keeps getting blasted across my TV is that we should all be more like her -- doing our patriotic duty to boost fourth-quarter retail sales. Sure, you can laugh at her. But then get in line and keep your credit card handy.

But, of course, the big story of this year's Black Friday has been the welcome news that at least some subsection of the population of the United States has come to the realization that it's time to step back from the brink. The budding protests against the decision by some of the country's biggest retailers -- Target, Macy's, Best Buy, Kohl's -- to move the start of their Black Friday sales to midnight Thanksgiving, or even earlier, is laudable.

The nearly 200,000 signatures on part-time Target employee Anthony Hardwick's petition to "Save Thanksgiving" is proof that both employees and customers of Target are beginning to see this endless race by retailers to one-up each other as dehumanizing and ridiculous. What does a Target employee forced to go to work at 11 p.m. on Thanksgiving have to give thanks for?

(Although, even here, in the protest arena, it's hard to know what to make of the "Respect the Bird" campaign hosted at AllRecipes.com that mixes pledges to "take back Thanksgiving" with KitchenAid mixer promotions and ads for pop-up turkey timers. Even the protests are inseparable from consumerist mania.)

The chains are lamely defending their move as a response to forces beyond their control:

"As that is the busiest shopping day of the year, it is imperative that we be competitive," said Anahita Cameron, a Target human resources director, in a statement quoted by the L.A. Times. "Our guests have expressed that they would prefer to kick off their holiday shopping by heading out after their holiday celebrations rather than getting up in the middle of the night."

Guests? Pre-programmed automatons would be more accurate. I am undoubtedly reading too much into the "Black Friday" parody of Rebecca Black's "Friday" currently touting the midnight Thanksgiving sale at Kohl's, but there is an awfully revealing moment at the very end of the ad.

After the perky Stepford-wife shopper sings joyfully about how she's "been in line since yesterday" and how everybody's going to Kohl's at "midnight, midnight" the ad ends with her observing, with a mild air of perturbance, that she "can't get this darn song out of my head."

Ladies and gentlemen, there's your winner of the 2011 award for honesty in advertising. A commercial attempting to brainwash consumers into lining up for a midnight sale manages also to explicitly reference the difficulty of shaking free from mindless jingles.

That's kind of brilliant. But also very wrong. Which makes it the perfect commercial for summing up the culture-wide psychotic spasm that is Black Friday. Stay home Thanksgiving night. Go shopping after getting a full night's rest. Sure, you might miss a sale or two. But you'll be a better human being.