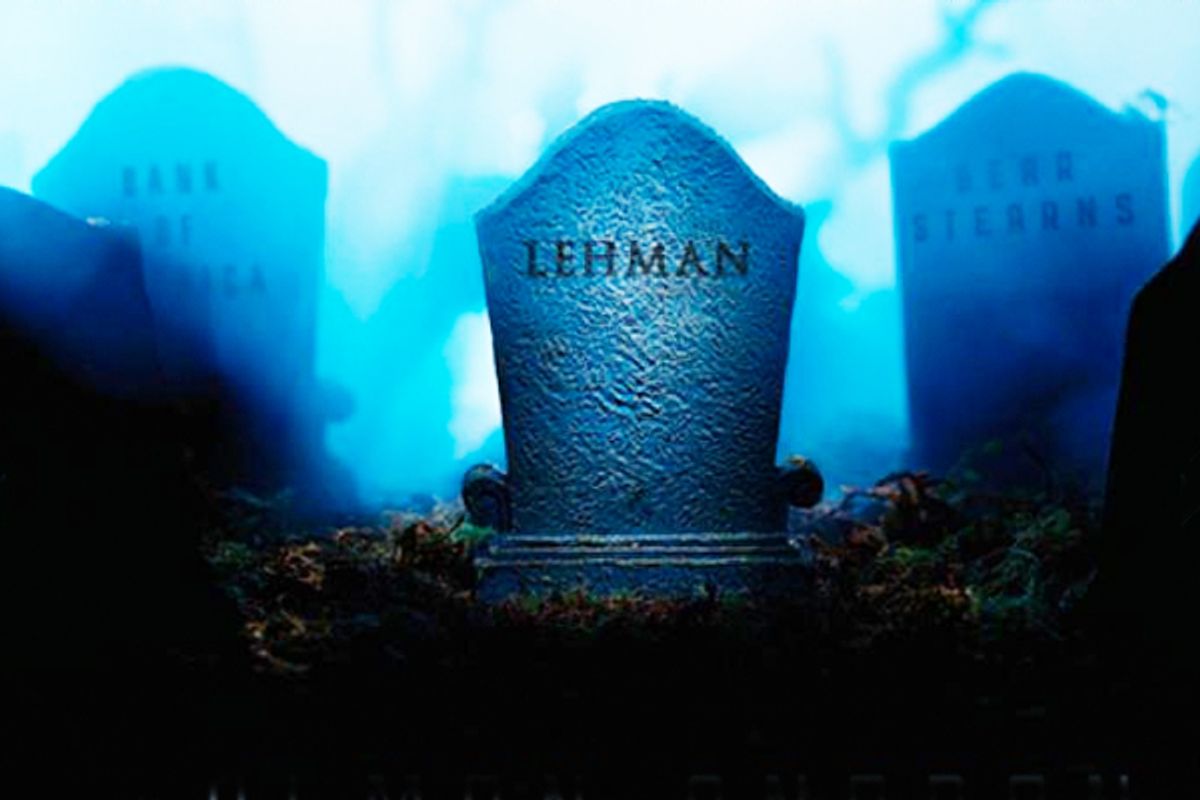 The following article is an adapted excerpt from the new book "Zombie Banks," from John Wiley and Sons.

The reason most people today are so scared of zombies could be a fluke of translation. The idea of the flesh-eating zombie depicted in modern-day books and movies originates from a 5,000-year-old epic, in which the goddess of love asks the father of gods to create a drought to punish the man who rejected her love. She then threatens to stir up the dead if her wish isn’t granted. Written in Sumerian, Babylonian, and other ancient languages, naturally there are multiple versions of the epic poem and different translations of those variations. While many translations depict zombies eating food “with” or “like” the living, some drop the preposition all together and have the creatures of the underworld eating humans directly. Zombie banks may not eat people or other banks, but their harm to society, the financial system, and the economy is just as scary.

The origins of the term zombie bank are much more recent than the "Epic of Gilgamesh." The expression was first used by Boston College professor Edward J. Kane in an academic paper published in 1987. it referred to the savings and loans institutions in the United States that were insolvent but allowed to stay among the living by their regula­tors turning a blind eye to their losses.The term gained prominence in the next decade when it was more widely used to denote Japanese banks, whose refusal to face their losses and clean up their balance sheets was blamed for the industrialized nation’s so-called Lost Decade. During the financial crisis in 2008, bloggers, columnists, analysts, and even politicians began using it when talking about the weakest banks in the United States and Europe.

In its simplest form, zombie bank refers to an insolvent financial institution whose equity capital has been wiped out so that the value of its obligations is greater than its assets. The level of capital is crucial for banks, more so than for non-financial companies, because in the event of bankruptcy, a bank’s assets lose value faster and to a bigger extent. Thus, when a bank’s equity declines significantly due to losses, its creditors panic and head for the door (deposits are insured in most Western economies, so depositors don’t run away as easily). Capital is the size of the buffer that protects creditors of a bank from losses.

Even though technically, wiped out capital means bankruptcy and rules in many countries require the authorities to seize a lender in such a condition and wind it down, history is full of examples when that was not done. The dead bank is, instead, kept among the living through capital infusions from the government, loans from the central bank, and what is generally referred to as regulatory forbearance -- that is, giving the lender leeway on postponing the recognition of losses.The intention is that economic conditions will improve and losses will be reversed; the bank will be able to make profits over time to cover the remaining losses and return to health.

The biggest fear that politicians and regulators have when a bank nears death is the possibility of contagion -- that the collapse will spook investors, depositors, and the public in general, causing a run on other banks. So the initial knee-jerk reaction by the authorities is to prevent the fall. Of course, not every failing lender is saved. Small banks around the world get taken over by authorities and wound down all the time; the FDIC in the United States has been seizing one or two every week since the crisis started.

There are two opposite approaches zombie bank managers take as they struggle to bring their institutions back to life. They’ll hoard cash, make few new risky loans, and wait for the slow profit-building to pay for the losses over time. Or they’ll take much bigger risks with the hope that they can make windfall profits to plug the holes. The first was employed by Japanese zombie banks in the 1990s and is faulted for that nation’s Lost Decade, when the economy couldn’t resume growth after the property bubble burst because the banks wouldn’t lend. The latter was the choice of action by many savings and loans zombies in the 1980s in the United States as they “gambled for resurrection,” in Kane’s words. Although some of them won their bets and survived, most saw their losses multiply, making their final resolution even costlier for the taxpayer.

The propping up of institutions that should have died is unfair to healthy competitors. In a real market economy, those companies that take the wrong risks and lose out are supposed to fail, their customers and market share shifting to the surviving firms that were more prudent. In the United States, the credit rating uplift that Citigroup and Bank of America enjoy from their implicit government support lowers their borrowing costs, giving them an unfair advantage over the thousands of small banks that need to rely on their own strength for their ratings. Community banks have to pay more to borrow, because when they mess up and fail, they get taken over and shut down. As the ECB provides short-term loans to Irish banks and other zombies in its region in place of the wholesale borrowing they no longer can access because investors aren’t willing to risk their immi­nent death, banks that fund themselves through more expensive retail deposits lose out. “The business model that was challenged most during the latest crisis, the wholesale funding model, is being rewarded when it should really be punished, curtailed,” says Antonio Guglielmi, a bank analyst at Italy’s Mediobanca. To compete with the zombies, healthy banks end up taking bigger risks too.

When the zombies offer higher rates to lure depositors, healthier competitors may have to as well so as not to lose customers, thereby hurting their profitability and future health if those rates are unsustain­able. The rescuing of failing institutions also creates or increases what’s commonly referred to as moral hazard -- the propensity of managers to take risk without considering the negative consequences, since they believe the government will bail them out in case the risks blow up in their face one day. If the executives who run their firms to the ground keep their jobs and their companies are resurrected with tax­payer funds each time, then future executives will have very little incentive to worry about the risk-reward balance that is crucial to the functioning of a healthy market economy.

Letting zombies linger around also leaves the financial system vulnerable to aftershocks following a major meltdown. If the recovery takes hold with no hiccups, everything is fine, but too many times, the road isn’t so smooth. With zombies around, a second shock will drive down the confidence of investors and customers much faster and bring the financial system to the brink of collapse once again. As much as the public might hate the bankers now, the financial system plays a crucial role in the global economy, allocating capital and moving payments around. A frozen credit market, as we witnessed in 2008, can put the brakes on economic growth.

Keeping interest rates at zero in an effort to give the zombies time to heal their balance sheets has many harmful side effects for the rest of the global economy. It’s a wealth transfer from pensioners and others relying on the fixed returns of their savings to the banks’ coffers. That transfer reduces the disposable income for a section of society and thus their spending, which can become a major drag on the economy if it lasts for many years. Meanwhile, the rise in govern­ment debt is a wealth transfer from future generations, who are forced to pay for their predecessors’ mistakes. As in the case of Japan, which has kept its interest rates near zero since 1995, it can also settle in culturally, creating expectations of stable or falling prices and cause delaying of consumption or investment decisions. “Twenty years of zero percent interest rates change the psychology of consumers and savers,” says Todd Petzel, chief investment officer at New York fund management firm Offit Capital Advisors. Petzel has calculated that the wealth transfer in the United States equates to $500 billion for each year that rates stay at these levels.

Traditionally, lower interest rates are central banks’ best weapon to stimulate economic activity. The thinking is that companies will borrow and invest when rates are lower; consumers will borrow and spend. Yet when there are zombie banks in the mix, the money provided at the low interest rate doesn’t necessarily trickle down to the consumers or the small enterprises. Zombies that borrow from the central bank at zero would rather lend to borrowers who can afford to pay higher rates since the zombie needs to heal its broken balance sheet as quickly as possible through profits. Thus, the current zero percent interest-rate policy has channeled funds to emerging market economies where returns are much higher, in double digits in some countries. That has caused overheating of their economies and could cause a crash the way Japan’s zero percent policy led to the Asian crisis of 1997–1998 when the free Japanese money found its way to neighboring countries.

Few people have made the connection, but even the events in the Middle East are an indirect result of the monetary easing in the West. Not only have the U.S. and European central banks kept inter­est rates close to zero, but they’ve also pumped trillions of dollars of extra cash into the global financial system. This policy of so-called quantitative easing has led to commodity price increases, including agricultural commodities. For the impoverished majorities of Middle Eastern countries, small increases in the cost of food can be devastating and served as a catalyst in the uprisings from Egypt to Tunisia. Last time around, when food prices surged, they came down fast with the financial crisis’s onset. This time, the Western central banks are deter­mined to keep pumping money until their banks can earn their way out of death, which can keep food prices high for much longer and lead to further unrest in poor countries.

Bailing out zombie banks can even bring down countries that have been otherwise prudent. Ireland joined Greece in seeking help from the EU in 2010, not because its government spending had been pro­lific in the past two decades, but because it decided to back its banks that collapsed with the crash of a property bubble. Pumping money into its zombie banks, which have proved to be black holes, almost doubled its national debt and raised fears that it could not sustain paying such a heavy burden.

It’s easy for politicians to make mistakes when faced with a crisis considering that decisions have to be made on the fly, with limited information at hand. Paulson and Geithner have said they had to rescue banks otherwise the world could have faced another Great Depression. Perhaps they were right initially -- to prevent a total melt­down, temporary measures were needed. However, once the panic subsides, politicians need to seize the opportunity to finish off the business they couldn’t during the heat of the moment. That hasn’t been done in the three years that have elapsed since the crisis.

Gilgamesh, who was a very good king and loved by his people, made the ultimate error of rejecting goddess Ishtar’s love. The ensuing seven-year drought, which Ishtar got the father of gods to inflict through her threat of bringing back the dead, devastated Gilgamesh’s empire. Keeping zombie banks alive can wreak similar havoc on the world in the next decade. To prevent a lost decade like Japan’s in the 1990s, today’s politicians need to kill the zombies so the drought doesn’t last longer.

Excerpted with permission from the publisher, John Wiley & Sons,  from "Zombie Banks" by Yalman Onaran.  Copyright © 2012.

Yalman Onaran is a senior finance writer at Bloomberg News.