Members of GIRLS, They Might Be Giants, Superchunk, the Old 97s and more share their favorite ear candy with Salon 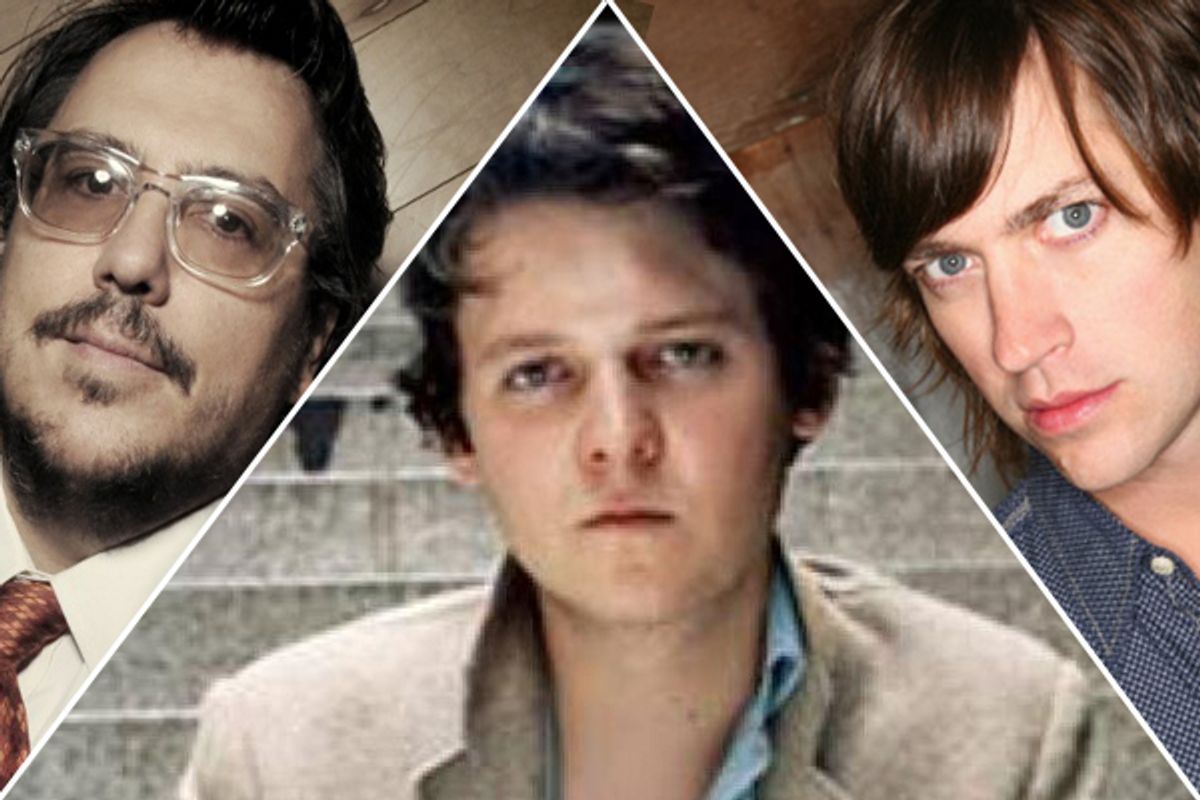 John Flansburgh of They Might Be Giants, Zach Condon of Beirut, and Rhett Miller.
--

Musically, it's been a year of haunting highs (think Adele's "21") and laughable lows (Rebecca Black's "Friday"). To kick off a new Salon roundtable feature, we asked a number of musicians to tell us which songs from the past year have stuck in their heads the longest. Check out their choices below -- and then sit back to enjoy a diverse, idiosyncratic and thoroughly irresistible playlist.

John Flansburgh from They Might Be Giants: Penny and The Quarters -- "You and Me"

In music production, there is something all songwriters, performers and engineers are familiar with -- it's called demo-itis. Demo-itis is the often futile effort of musicians to recapture the spark generated in the moment a song is first recorded. Although many songs are first tracked under compromised conditions, the sound can sometimes appear to be the idea of the song itself, and while these recordings are typically unfinished or somehow unreleasable, countless hours are spent trying to get back to the fleeting original vibe of the demo. The recording I would like to recommend to you in some ways is the ultimate example of how simple yet spectacular a demo can be.

The song is called "You and Me" by Penny and the Quarters. It was never commercially released. According to Wikipedia, the master tape was uncovered amidst the estate of a Columbus, Ohio, recording engineer in 2006. But you might have heard the song before me, as it was notably included in the film "Blue Valentine." I first heard it doing an old fashioned needle drop of one of the many Eccentric Soul compilations by The Numero Group. (Like Rhino's box sets of yore only to another power, this Chicago-based label makes lovingly expansive and expensive vinyl packages of obscure record labels of the soul era.)

The arrangement of "You and Me" is simplicity itself. It's just an electric guitar played through a small amplifier, three male backing vocalists and a female vocal. It is recorded in a single room and I would make an educated guess that it is all on one microphone. With no drums and four vocals, the harmonic impact might make you sit up straight -- it's mellow and easy but somehow VERY LOUD. The balance is perfect, with the backing vocals and guitars gently echoing off the walls, while the lead vocal -- more direct and immediate on the mic -- gives you the feeling she is singing right next to you. The voice of the female lead, whose name is still a mystery, is an arresting balance of youthful freshness and real experience: this is definitely not the first time she has sung over a group. She casually talks through the top of the take but once the song gets going she rips into some heartfelt vocalizing the she keeps going to the very last beat.

The melody bears a passing resemblance to the Isley Brothers "This Old Heart of Mine," a hit from ten years earlier, but don't let that stop your own discovery of the recording. Inside it there is something deeply beautiful and singular. As someone who has made a lot of demos I look forward to the day I make one as good as "You and Me."

They Might Be Giants' latest album, "Join Us," was released earlier this year.

With a finger pad rhythm section -- a breathless, undulating sax, moored in the lower reaches of its range -- Colin Stetson's "Judges" takes over my imagination. "Judges" moved from being a track on a CD to creating footprints in my mind -- I can follow them whenever there is a moment. This music winds up being unforgettable, and gives me an immense belief in the power of the individual musical voice.

Why do I like this song? I don’t know anything about the artist, but I don’t think that really matters. My favorite music seems to be made by artists or composers that I don’t know anything about. I have a vinyl album with a Hawaiian music group called The Polynesians that I found six years ago in a vintage record shop and I haven’t got a clue if the musicians are professionals or natives. Maybe they are professional natives? I don’t wanna know. I think I like the anonymous thing. It makes music more mystical and that is what music is.

Why do I like this song? I don’t know. Maybe because it creates an ambience in whatever room I play it in. It sort of makes me feel that I am somewhere else. The room feels warmer, brighter and it sometimes makes me feel that I’m in a scene of a movie. Even washing the dishes feels magical listening to this song.

I have never understood people's urge to know everything and I think it’s a strength when you can’t tell if it’s Tchaikovsky’s sixth symphony or Shostakovitch’s 15th. (which my good friend Pelle once couldn’t). You judge music differently if you know who made it and how it’s made.

This song could be recorded in a huge deserted flight hangar in the middle of a desert or they could have recorded it in a completely dry studio and fooled me by putting loads of reverb on everything. But I don’t wanna know. Recording music might be about tricking people, but I like it better when musicians feel like magicians.

I think it’s enough to say that I like this song.

I have to be honest -- there was literally only one song from the whole popular music realm that got the play-on-repeat treatment from me this year. For the most part I listened to classical music and metal in 2011, and a fair amount of the metal was a couple of decades old. But Wye Oak's "Civilian" is an outstanding song with a haunted wisp of a melody and a lyric I could really hang onto. I think these are pretty grim times for rock bands lyrically -- people don't really seem to put much effort into their lyrics, or to have much ambition -- so it was a real kick in the mouth to dig into "Civilian" and find the story hidden away in its abbreviated revelations and reluctantly shared secrets. "I still keep my baby teeth/in the bedside table with my jewelry/You sleep in the bed with me/My jewelry and my baby teeth" -- this is good writing, to my ear. I don't get the chance to say that as often as I'd like.

The Mountain Goats' albums include "The Sunset Tree" and "Heretic Pride."

There is a song that comes to mind when thinking of this last year... One that I wouldn't have expected to like as much as I did. But I found myself listening to it late at night, often enough to warrant me looking into why I enjoyed it so much: Frank Ocean's "Novacane."

Something rang close to home in the lyrics, and I'm not talking about the boastful sex-drugs-rock-n-roll part of things. In some way that's not even really what the song is about. I realize that what was grabbing me, outside of the drugged-out haze of the bass line and the melodies, was the honesty. What normally would come off as a boast turns into the foggy world of, "What am I doing?". He turns the whole situation inward... somewhere solitary. There is the obvious knowledge that while the situation comes in handy as a story to be lived and respected, it is also followed by the nauseous realization that you may or may not be in over your head... I guess in my career, I've always felt that way. Every time you say to yourself, "What an experience! Who else gets to have this?" it's always followed by a moment of, quite frankly, "why?" Again, this is something you can't put into words. But with this song, whether you flow to the extremes or not, Frank Ocean captures that mental nausea and confusion quite vividly. Weird, right?

Beirut's albums include "The Flying Club Cup" and "Gulag Orkestar."

The song I can't get out of my head is "Do You Love Me?" by Guster. It is a huge smash hit on the FM radio in my brain. I dare you not to play it over and over. What is the secret? The bells? The simple but acrobatic melody? I'm going to say that the secret to this song's success is the enthusiasm with which it is delivered. Way to go, Guster.

Rhett Miller's latest album, "The Interpreter: Live at Largo," was released this week. The latest album by his band, The Old 97s, is 2011's "The Grand Theatre: Vol. 2"

This song bangs. Right when it came out, I was at a fancy-type club in Pittsburgh, like a no-hats-allowed sort of spot. I still don't understand why this happened, but there was a buffet-style food tray right in the middle of the club. It took people a little while to investigate what was in it, but it turned out to be filled with hot chicken nuggets. When this discovery was made, "Tupac Back" came on, and we went in so hard on these nuggets. They were free, I guess.

Gregg Gillis -- aka Girl Talk -- is a celebrated DJ. His latest album, "All Day," is can be downloaded for free here.

I can't get enough of Chaka Kahn's "Sweet Thing" and a song called "Rasta Love" (but I'm not sure who that's by). There's also a hot Sade remix by DJ Rashad or Jody Breeze, I can't keep track. It has a similar vibe to Sweet Thing, though. Peace to tha new times comin!!!

Mac McCaughan from Superchunk and Merge Records: J. Mascis -- "Is It Done"

This whole album is amazing. J is still making records that feel familiar but are full of new beautiful moments. Lots of such moments on the album, but this great song features the part where the electric solo comes in at 2:57 and ices it.

Christopher Owens from GIRLS: Selena Gomez -- "Love You Like A Love Song"

"Like A Love Song" by Selena Gomez was the song of the year for me. I still want to hear it everyday -- the bridge is still fresh. It's a great song from a girl that I love and that I think is getting better and better each year. When I saw her performing the song on Jimmy Fallon, that was it -- I was impressed. Oh yeah, and Selena, if you read this... I love you like a love song, baby.