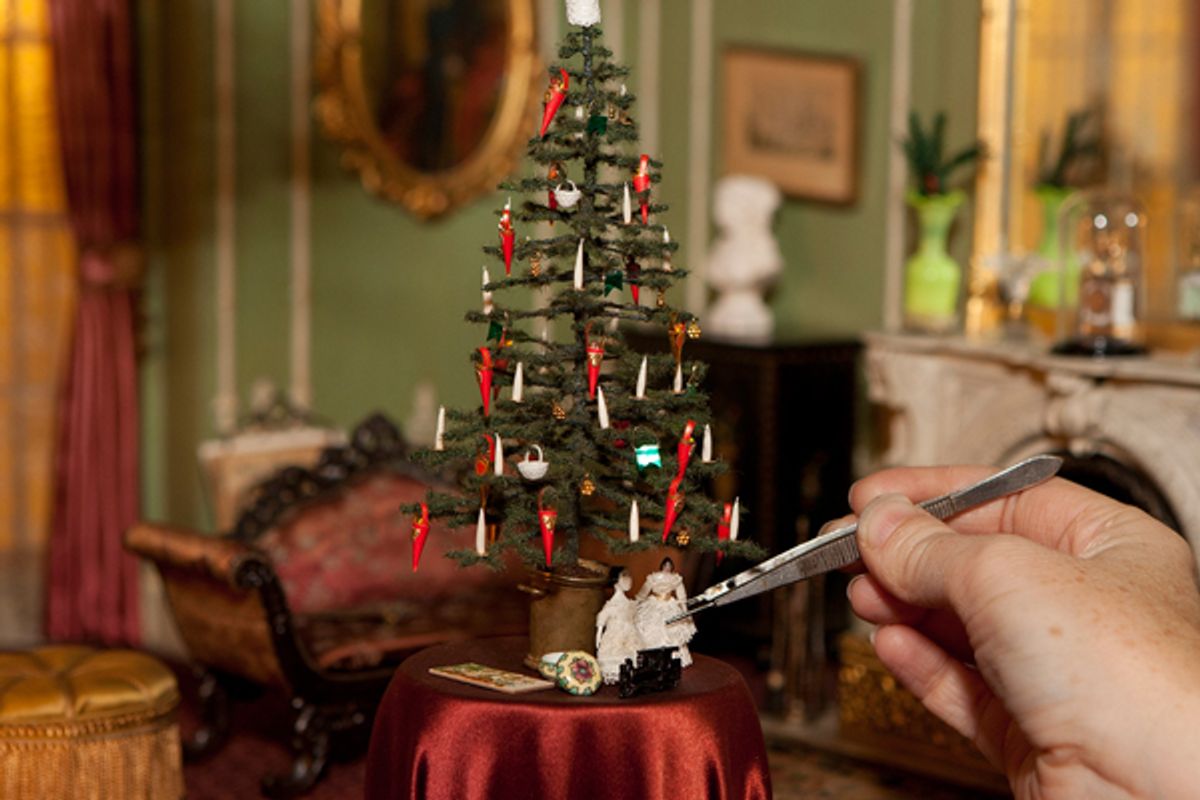 The Art Institute of Chicago's Thorne Miniature Rooms -- nearly 70 tiny, imaginative incarnations of period settings from the Renaissance through the mid-2oth-century -- are the exquisite handiwork of Narcissa Ward Thorne and a coterie of Depression-era Chicago craftsmen.

Dreamed up, designed and executed by a wealthy socialite -- with help from underemployed artisans -- and shown off for charity beginning in the 1930s, these miniature marvels star settings as diverse as a Tudor English chamber, an old-regime French boudoir, minimalist Japanese living quarters and a 1940s California living room.

2011 marks the second year that caretaker Lindsay Mican Morgan has decorated a handful of the rooms for the holidays. The process takes an immense amount of research, time and effort -- involving everything from scholarly inquiries to the fashioning and commissioning of tiny toys and props.

Over the phone, Morgan explained the Thorne Rooms' background and discussed the laborious process of setting them up for the season; the slide show that follows takes you behind the scenes of the rooms' festive reinvention.

Can you give a short history of the Thorne Rooms? When and why were they created?

They were created by a woman named Narcissa Ward Thorne (Mrs. James Ward Thorne). She was born in Indiana, but moved at a young age to Chicago and eventually married into the Montgomery Ward business. She always collected miniatures. Miniatures have gone through quite a few phases of popularity, basically since the beginning of time; during Mrs. Thorne's time period, in the 1920s, Queen Mary was making dollhouses and collecting fine miniatures -- so when Mrs. Thorne was collecting and putting together the rooms, it was already a little bit popular. But the idea of doing miniature period rooms specifically -- full scenes -- was not a common one. Not the way she was doing them. The dollhouse-type scene, or the scene within a cabinet, had been done -- but she kind of came up with these herself.

For society ladies at that time, education was more about how to properly put on your hat than about history and whatnot. But Mrs. Thorne was very interested in decorative arts on her own, and taught herself. She collected very fine books -- all the right materials to be educated in what was considered the height of fashion in the '30s. She made her first set of rooms just after World War I. You have to understand: This is when people were suddenly able to buy whole rooms of furniture [from abroad], and put them together again for museums. Because of the war, all these very elite households were suddenly having to basically put their whole houses up for sale -- so museums were buying whole rooms, and so were individuals. (Hearst, for instance, was putting together whole rooms of medieval furniture.)

Of course, museums only have so much real estate. So Mrs. Thorne developed this idea of showing fine miniatures instead of doing full-scale period rooms. Actually, her first set of rooms was largely made from antique miniatures. These rooms were shown at the 1933 World's Fair, as well as what now is the Chicago History Museum. At this point, when she showed the rooms, there'd be some minimal fee for spectators, and the proceeds would always go to benefit certain groups of people -- sort of like a charity fundraiser. Some of the money went toward [funding] out-of-work architects; another cause she supported was the children's hospital. One of her pet causes was the Women's Exchange, which helped generate income for women who had either lost a husband or were somehow disabled.

Obviously, these rooms would be a lot harder to accomplish nowadays. During the Depression, Mrs. Thorne was basically able to hire people for a higher wage than they'd be making elsewhere -- but it was still next to nothing. She was sort of notorious over at Marshall Fields, because she'd go to see the window displays, and then she'd go and see the window display workshop, and ask, "Who did that?" Someone would raise their hand; she'd say "I'll pay you seven cents more," and then off they went. She was friends with the Fields, but she was also notorious for stealing employees.

So there wasn't actually a huge expense involved in making them?

Oh, there was. It's just that it was more affordable to do these back then. But she definitely spent a significant amount of money putting them together. Otherwise, she would have been lounging about doing society lady things. Of course, she did do that a bit, but this project is what kept her going -- it was her passion in life. She really took to it full-tilt. She would put in full work days -- beyond full, even. Eight in the morning until 8 at night, in her little studio, working on these miniature rooms for years and years. So she was pretty passionate about it!

How much upkeep do they take now?

There's a fair amount, but less and less over the years. Originally, whoever was the caretaker would basically have to straighten and tidy them up almost every morning, because they were not as well sealed as they are now. I've been told kids would come and pound on the windows or walls, and everything would kind of shake a little bit -- but that was back in the '40s or '50s. Now, everything is very secure, and there are rubber gaskets to keep most of the dust out and whatnot.

[Keeping the Thorne Rooms in good condition] basically involves upkeep of everything imaginable, though, because these run the whole gamut of everything else in the museum. You have everything from real paintings -- in the 1930s San Francisco room, there are quite a few original art pieces commissioned from contemporary artists -- to furniture pieces, fabric, needlepoint, rugs ... It's kind of fun because I get to kind of talk with the various departments of the museum; if there's a concern for a certain object in one of the rooms, we have a whole department for that kind of object.

This is the second year that you've decorated some of the rooms for the holidays. How long does the decoration process take?

Research is the major time-consuming element, for me. I start in late spring or early summer. We're dealing with time periods from late Tudor England up through the 1940s in America, so it's a pretty huge range of time to be dealing with. And the holidays have gone through some pretty major changes within that time period; we go from scenes slightly reminiscent of pagan-era England straight through to the years after the First World War.

Sadly, not all of the rooms work well for holiday scenes. A lot of the early American rooms are really beautiful -- but then you think: "Wait, they really didn't do much of anything at that point." For a time, Christmas was outlawed [in parts of the northeast]; you couldn't do anything (well, some people would still try, and then they'd get in big trouble).

We really try to get it as historically correct as we can. Even the Williamsburg room was difficult -- because, of course, if you go to colonial Williamsburg, they really do it up decoration-wise. When I talked to them about the rules they use when setting up decorations, they said they'll [use any material] they know to have been available in the period. My only problem -- and they're the first to admit it -- is that it's more of an idea of what would be done; it's not really what would be done. Sometimes, for example, you'll see people using oranges or pineapple. The richest person in town maybe could afford a pineapple. And that would be the most exotic treat on Earth. You're not going to be stapling that to the outside of your building!

The Holiday Thorne Rooms are on view at the Art Institute of Chicago now through January 7, 2012.