How my book became part of the "satanic sex stabbing"

My werewolf guide was found at the scene of a gruesome crime, but what chilled me was the media panic that followed 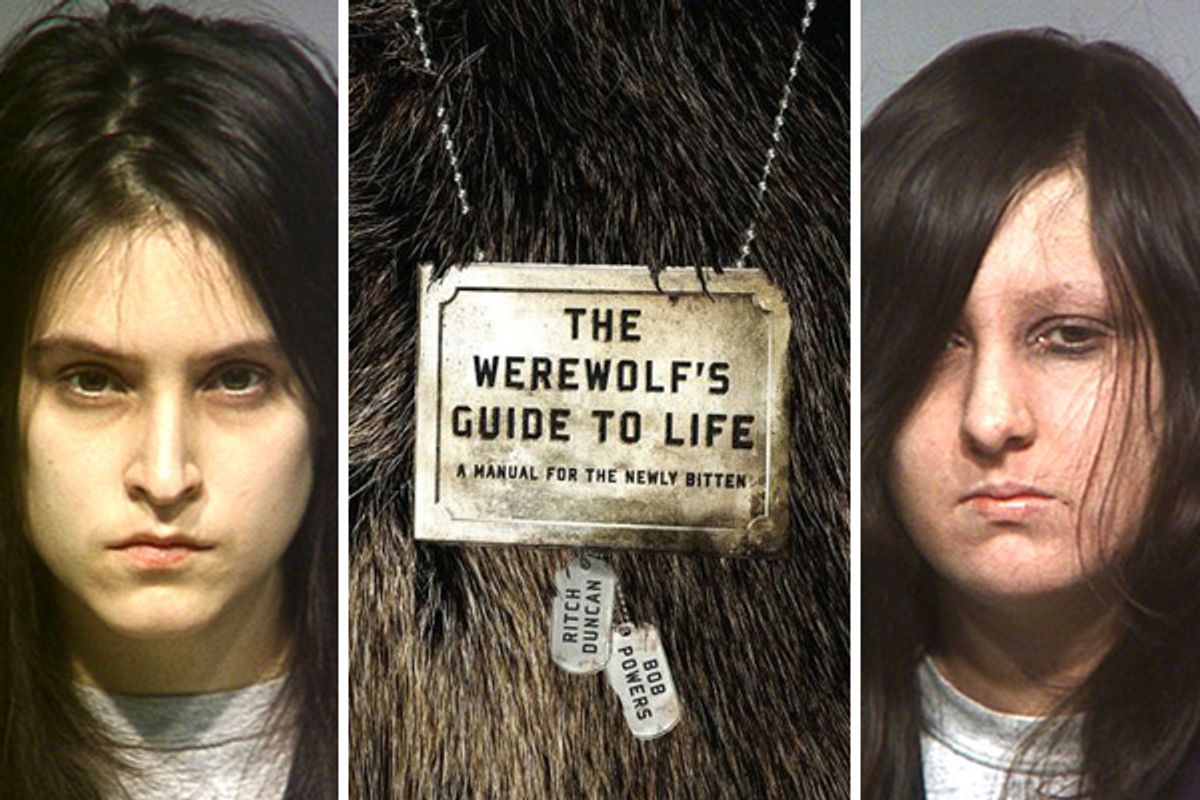 On the night I heard about my connection to a “satanic sex ritual stabbing,” I had just finished the dishes with my wife. It was about 10 p.m. on a Wednesday, my 2-year-old daughter was asleep in bed, and I was in the living room, casually catching up on email. “I assume you’ve seen this,” a friend wrote. The link took me to a headline on Gawker.com:

The post was accompanied by the menacing mugshots of two young, dark-haired Goth chicks. The first girl, Rebecca Chandler, defiantly faced down the camera with piercing eyes, her angular face tightened into a spiteful glare. The second, Raven “Scarlett” Larrabee, looked a little less aggressive, instead opting for a well-practiced look of high school derision, accentuated by wavy black hair that almost completely obscured the right side of her face. The pictures looked like casting photos from the clever feminist horror flick of the early 2000s, “Ginger Snaps,” about two teenage sisters coping not only with periods and puberty but the fact that one of them was slowly turning into a werewolf.

I know all about this film, and dozens of others like it, as I’m something of a werewolf expert. In 2009, along with fellow comedy writer Bob Powers, I wrote a humorous self-help book for werewolves, titled "The Werewolf’s Guide to Life: A Manual for the Newly Bitten." It included friendly tips for lycanthropes to safely manage their condition, survive their “moons,” and live safe, productive, nonviolent lives. It included dozens of helpful graphs and charts and featured illustrations by the very funny cartoonist Emily Flake. This illustration, for example, demonstrates the perils of leaving one’s wedding ring on during a transformation: Well, that just got a lot less funny. But the real sucker punch came when I got to the part about the reading material on their table.

According to Chandler, the sex and stabbing were both consensual, but "got out of hand" (at least, the stabbing did). Chandler also says that Larrabee did "the majority of" the cutting, and that Larrabee was "involved in satanic or occult activities"; in their apartment, the cops found a bunch of books that sounds like they were purchased at the local Hot Topic, including The Necromantic Ritual Book and The Werewolf's Guide to Life.

My body went numb. Was there another "Werewolf’s Guide to Life" out there – like, an evil one? No, that was stupid. Of course it was my book. My stomach ached, and I grew dizzy. It was the same creeping nausea I used to get when I was bombing onstage as a standup comic, but this had an added horror. My joke wasn't just being misunderstood; underneath my minor panic attack was far darker question: Could my humor book about nonexistent monsters inspire a real-life murder?

I called my coauthor Bob, and after rereading the article and several others, I was relieved to discover that the victim of the encounter was not dead, would apparently make a full recovery, and did not appear to be pressing charges. None of this information was apparent from any of the sensational headlines.

I began to calm down a little. Bob reminded me that our book is shelved in the humor section, and there is nothing in it that encourages violence. Even if one were deluded enough to believe it was true, it’s still 200 pages of instruction on how NOT to hurt yourself or others. If those two girls were into the occult (an assertion that is by no means proven), it's possible they might also enjoy a funny werewolf book. But it makes about as much sense to include that book as evidence that a satanic sexual bloodletting took place as it would a VHS copy of "Teen Wolf Too" starring Jason Bateman. (And yes, "too" is the proper spelling.)

Over the next 24 hours, we watched powerlessly as the story went viral. MSNBC published a story ominously stating that police recovered “a copy of a necromantic ritual book titled 'Werewolf's Guide to Life.'”

They weren’t alone. Our book was repeatedly positioned in story after story as though it contained ancient satanic secrets, or was torn straight from the pages of Aleister Crowley's diary. England’s Daily Mail featured the cover of our book under a headline that screamed: “Two female room-mates 'tied up teenager and cut him 300 times during two-day satanic sex torture marathon.” The caption for the book's picture read: “Odd books including 'The Werewolf’s Guide to Life' were found in the pair’s apartment.”

Glenn Beck went on the radio and amazingly used the incident to align Wisconsin satanism with the union organization in that state, the Occupy Wall Street movement, and an ancient god named Baal -- and even threw in Hitler at the end, because that is an entirely normal and logical leap to make. The original title of Beck’s post, by the way, was “Man Killed in Satanic Ritual.” A correction added later thanked Internet commenters for pointing out his error.

Our book went on to be misrepresented in many different languages, including Chinese and Dutch, the latter of which (according to Google translator) claimed “The Werewolf’s Guide to Life” was “A book of black magic rituals.” No one mentioned that our book came out in 2009, maybe because the story doesn’t sound as sexy if the terrifying occult book found at the blood-drenched altar of Satan came out the same year as "Ice Age 3."

We eventually found our sense of humor about it. I wrote an official response for our blog. Bob joked about it on Facebook, and we hoped it would help us sell thousands of books (so far, no luck).

But fun as it was to be swept along in this, it also kind of sucked. There may be no such thing as bad publicity, but the book these articles described certainly wasn’t ours. If you did happen to be looking for a step-by-step guide on how to murder people for Satan as part of a two-day sex binge, one look on Amazon would tell you our book wasn’t that.

Even worse than being misrepresented in the media was how lazy it all seemed to be. If the reporters charged with covering this story actually spent five seconds looking up what the book was about (they certainly had the time to do a Google search and steal an image of the cover), they could have mentioned it was filed under the “humor/parody” section. To be fair, some journalists, including the Smoking Gun, did. Gawker came close, questioning the book’s real-life satanic qualifications with the Hot Topic quip.

But as I read more of these stories, I came to the depressing conclusion that it wasn’t laziness to blame, it was tailoring. In story after story, the facts of the case actually seemed less important than the details that appealed to a particular website’s niche. Those that worked were pushed forward, and those that weren’t got held back. And if I were going to complain of shoddy treatment, I got off easy compared to what those girls had to endure. Just to pick one example, a website called BroBible ran the mugshots, of course, and then opened with these lines: “How kinky are these sluts? Better yet, how pathetic is the poor bastard who took a bus FROM ARIZONA to Milwaukee just to have sex with them?”

It’s safe to say that something strange and horrible happened that night in Wisconsin, but something strange and horrible is also going on when the images of two young girls who haven’t been convicted of any crime can be rocketed around the globe, and the facts of their lives ignored or twisted. What happened for sure was those of us clucking our tongues, gasping and laughing as we read this story weren’t getting the truth about those girls, not by any stretch. And that certainly isn’t a new phenomenon.

Earlier this year, the men known as the West Memphis Three were released after almost two decades in prison. Their story, popularized in the award-winning documentary "Paradise Lost: The Child Murders at Robin Hood Hills," told the tale of three teenagers convicted of child murder despite a notoriously bungled investigation. Though the crimes were different, that story has a fair bit in common with the satanic-sex tale: The defendants had scary mug shots. They were “weird kids” who never seemed to have their act together. They were outsiders. In that particular case, the boys listened to scary-sounding music like Metallica, while Chandler and Larrabee read scary-sounding things like "Intro to Sigilborne Spirits" and -- GASP -- "The Werewolf’s Guide to Life." But both stories thrived on a fundamental mistrust of what is different.

No one wants to look at the story of Chandler and Larrabee as the story of two people. Instead, it’s another piece of Internet content, and showing the whole truth takes the fun out of it. In the age of the hit count, this story had all the elements of a traffic monster: blood, sex, Satan, and a couple of evil-looking young girls straight out of central casting. Their mug shots made for a splendid movie poster, and our book was the cardboard standup in the lobby. Whatever really happened was so much less entertaining than what could have happened, so why not use technically true words that make the story what they wanted it to be?

Why use words like “poked” or “pricked” 300 times when you can say “slashed” or “stabbed”? Why mention that the victim went there of his own free will when you can say he was “lured by the promise of sex”? Why frontload the fact that he wasn’t pressing charges, or was recovering at home, when it’s so much more delicious to let the reader believe he’d been murdered? And what the hell, if there’s a book that sounds dangerous, why let people know that it’s supposed to be funny?

Whether Rebecca Chandler and Raven Larrabee are guilty of a crime, I don’t know. Was this the story of two cold-blooded, evil satanists whose ritual of sex, blood and murder was thwarted by police? Or was it a case of two relatively harmless wannabe wiccans who hadn’t mastered the concept of a safe word? Likely, the truth lies somewhere in between. But if we don’t know the answer to that question, it is worth asking: How good was this story? Was it worth the treatment those young women received as story after story about them filled with lies and half-truths spread all over the world? Because that’s what these ghastly novelty articles look like to me -- a grievous wounding, by hundreds of little cuts.

Ritch Duncan is a writer and comedian living in New York City. Manageable samples of his vast body of work can be found at twitter.com/ritchied.