China is challenging our tech dominance, but we'll stay on top -- as long as we keep attracting immigrants 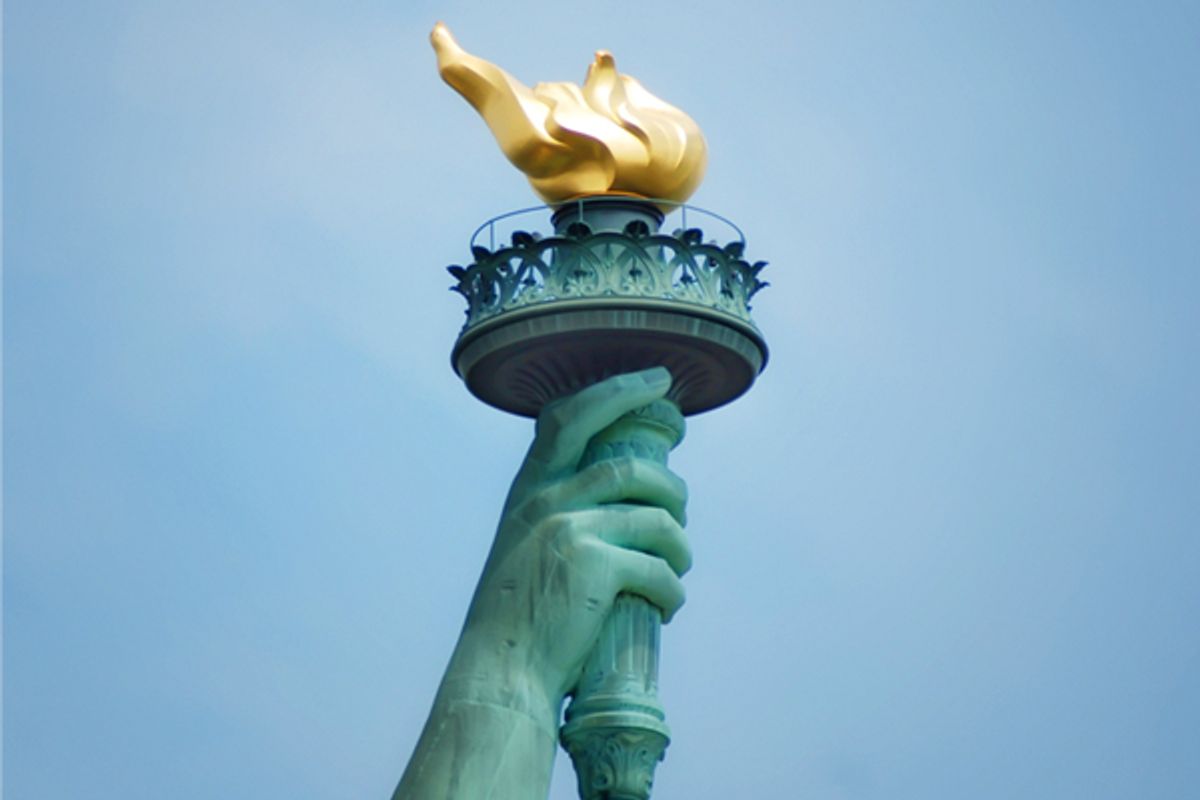 This article is an adapted excerpt from the new book "Borderless Economics," from Palgrave MacMillan.

Until recently, America’s technological preeminence was based on a simple formula: The world’s best brains came to the United States. Some came because their own governments were wicked and stupid enough to persecute them: Think of the Jewish physicists who fled Nazi Germany. More came because America was such a congenial place to conduct their research. Debate is free. Academics are well paid. And the process by which science is turned into new technologies — the country’s scientific “ecosystem,” if you will — is the world’s most sophisticated. Universities work hand in glove with industry. Students and professors often set up companies to commercialize their ideas. Venture capitalists provide investment and advice.

This model still works pretty well. Migrants make up about half of the workers in the United States with science or engineering qualifications, and accounted for two-thirds of the growth in that talent pool between 1995 and 2006. Half of the bosses of Silicon Valley start-ups in 2005 were migrants, and foreign-born workers at America’s most innovative firms file most of the patents: 72 percent at Qualcomm, 65 percent at Merck, 64 percent at General Electric and 60 percent at Cisco.

On its own, however, the old model is no longer good enough. Other countries that were once scientific backwaters — such as China and India — are at last shaping up. In 1990 the “old” rich countries — North America, Europe and Japan — accounted for more than 95 percent of the world’s scientific research, according to the United Nations. By 2007 that had fallen to 76 percent. China probably has more scientists than America now — both had about 1.5 million that same year.

American scientists, however, are more productive. They wrote 28 percent of the published scientific papers in the world in 2007, against China’s 10 percent, though the Chinese share had doubled since 2002. The quality of American papers is also higher: the best crude measure of this is the number of times a paper is cited by other scientists, and the average American paper is cited three times more often than the average Chinese one.

Some reports of China’s scientific rise are misleading. For example, according to Thomson Reuters, the number of patents filed in China grew by a staggering 26 percent a year between 2003 and 2009, against America’s more modest 6 percent. Thomson predicted that China would overtake America as the world’s most prolific patent-generator in 2011.

That will be hailed as a triumph for China. But not every patent filed there represents an original or useful idea. Bureaucrats in Chinese patent offices are paid more if they register more patents. “That must tempt them to say yes to ideas of dubious originality,” suggests my colleague Tom Easton. The Chinese government offers generous financial incentives to companies that file patents, making it worthwhile to patent worthless ideas. “Patents are easy to file, but gems are hard to find in a mountain of junk,” says Tony Chen, a patent attorney in Shanghai.

China really is becoming more innovative, but the picture is more nuanced than the headlines imply. The best Chinese ideas are the ones that travel. These are disproportionately generated through collaboration with scientists in other countries. For example, a Chinese study done in collaboration with American scientists is cited more than three times as often as the average domestically produced study.

Cross-border scientific collaboration is growing rapidly more common. A 2011 study by the Royal Society, a British scientific club once led by Sir Isaac Newton, found that the proportion of papers published in scientific journals that were the result of such collaboration has risen from 25 percent to 35 percent since the mid-1990s. And collaborative papers are far more likely to be cited by other scientists.

America is well placed to exploit the trend toward greater collaboration — a high proportion of the best scientists of every ethnicity live in or have spent time there. Those who reside in America stay in touch with their brightest peers back home. Those who work in America for a while and then return home keep in touch with their peers in America. As migrants move in and out of American universities and technology firms, they create a web of ties that puts the United States at the center of the global scientific conversation.

The Royal Society’s findings bear this out. The report notes that collaboration is often driven by linguistic or historical ties — scientists from Francophone Africa are especially likely to work with scientists in France, for example. Collaboration among developing countries is growing fast, but it is still dwarfed by the links between developing countries and rich ones — only 5 percent of African biomedical research papers are the result of partnerships between African countries, while 77 percent are the result of collaboration with a rich country.

Scientists continue to collaborate even when their governments are at each other’s throats. The number of papers coauthored by American and Iranian scientists, for example, rose 472 percent between 1996 and 2002 and 2004 and 2008. Overall, “the dominant role of the USA is striking,” the Royal Society’s authors observe. It accounts for 17 percent of internationally collaborative papers, far more than any other nation. It collaborates with nearly everyone — so much so that no country gets more than a 5 percent share of the United States’ total output.

Some Americans worry that when brainy immigrants flock to America, they grab tech jobs that might otherwise have gone to Americans. This is unlikely. The number of tech jobs is not fixed. And in fact, researchers William Kerr and William Lincoln have found that a rise in the number of skilled immigrants may actually stimulate native-born scientists to be more productive. When an American city attracts more foreigners with H-1B visas (which are given only to those with skills that are in short supply), the number of patents filed by locals rises.

As the world’s favorite destination for migrants, the United States is also plugged into networks that link businesspeople to one another. America’s ability to tap into all these networks gives it a competitive advantage. The combination of immigrant get-up-and-go with immigrant network-building helps to explain why immigrants in America tend to be more entrepreneurial than the native born. And the proportion of American entrepreneurs who are immigrants is rising: from 13.4 percent of the total in 1996 to 29.5 percent in 2010.

Some Americans think immigrant networks make America weaker. Mark Krikorian, the author of "The New Case Against Immigration: Both Legal and Illegal," frets that modern immigrants’ ability to call home every day makes them less likely to give up their old ties, and therefore less likely to become truly American. It is a coherent argument, but wrong. Nationality need not be an either/or choice. Just as a man can be both a son and a husband, he can also be both Indian and American. His loyalties may sometimes be divided, just as a man may feel torn if his wife and mother are at loggerheads. but most such problems can be resolved or papered over. It is rare for relations to degenerate so badly that the man must sever ties with one of the women he loves.

Nations are not exactly like families, but the analogy holds. When the United States invaded Iraq, many American Muslims were furious. but it is quite possible to be furious with a particular American government and still loyal to the country itself. Democrats and Republicans manage this trick roughly half the time each.

When America admits migrants, it is not diluting its own culture, but spreading its ideals across the world. No other country has such influence. The closest contender, the European Union, wields tremendous soft power by letting neighboring countries join, as fifteen (mostly Eastern European) states have since the end of the cold war. To join the club, a country must accept market economics, abolish the death penalty and uphold a long list of human rights. But this power only works on countries in the same region — no one is considering letting east Asian or Latin American nations into the European Union.

Many things undermine American soft power. Well-publicized abuses, such as the torture of prisoners at Abu Ghraib prison in Iraq in 2003, spur some foreigners to hate Americans in general. Well-publicized insults, as when an attention-seeking Florida pastor burns a Koran, fuel anti-Americanism far and wide. Some aspects of American culture will always repel some people.

But the biggest threat to American soft power is the backlash against immigration. Thanks to the networks created by immigration, America is richer, more innovative and far more influential than it would otherwise be. Yet these advantages could all be frittered away if the nation were to close its borders.

From "Borderless Economics" by Robert Guest. Copyright © 2011 by the author and reprinted by permission of Palgrave Macmillan, a division of Macmillan Publishers Ltd.

Robert Guest is currently the Global Business Editor at The Economist. Before joining The Economist, he was the Tokyo correspondent for The Daily Telegraph. The winner of numerous awards, Guest is a regular on both the BBC and CNN. He is the author of "The Shackled Continent."