"Hedy's Folly": The movie star behind your cellphone

How Hedy Lamarr, the most beautiful woman in the world, invented a technology we use every day 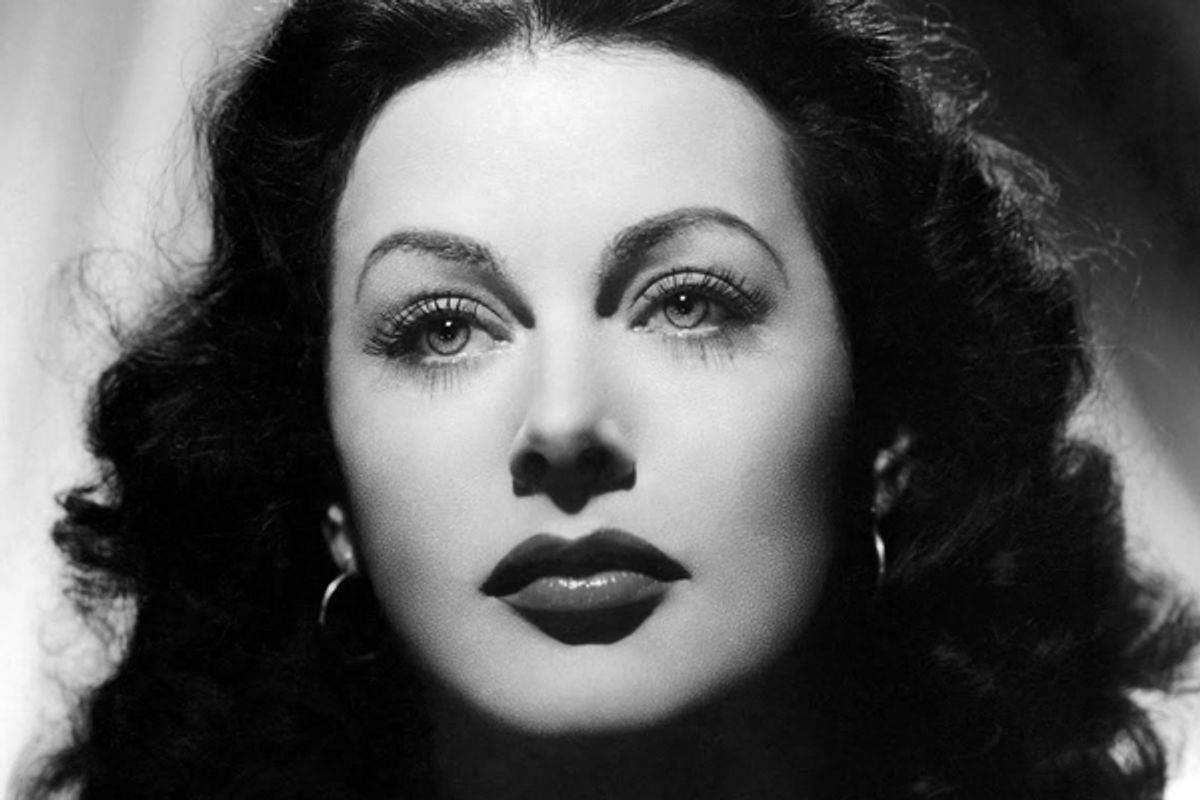 In the summer of 1940, George Antheil, an avant-garde composer trying to make it in Hollywood, was invited to a dinner party at the request of the most beautiful woman in the world. She, a movie star, wanted to talk to him about her breasts: Did he think they could they be made any larger? She sought out this improbable consultation on the authority of several articles Antheil had written for Esquire magazine applying his supposed knowledge of endocrinology to such questions as whether one's wife had been unfaithful and "which girls will and which girls won't."

Antheil was properly dazzled by the introduction. He later wrote that his "eyeballs sizzled" upon meeting Hedy Lamarr and that she was even better-looking in real life than on film. The question of the actress' breasts seems to have been dropped shortly thereafter, but the two did wind up collaborating on an unlikely project meant to support the Allied war effort: inventing a process by which remote-controlled torpedoes could evade signal-jamming attempts by the enemy. This process, which was patented, is essential to much of the wireless and cellular communications technology we use today.

Richard Rhodes' new book, "Hedy's Folly: The Life and Breakthrough Inventions of Hedy Lamarr, the Most Beautiful Woman in the World," is the first book-length attempt to rescue this odd and marvelous story from the dustbin of history. Because the U.S. Navy at first declined to implement their patent and then later revived it under still-undisclosed circumstances -- apparently without either Lamarr or Antheil knowing about it -- the pair's contribution has been obscured. Antheil died in 1959, but Lamarr, who lived until 2000, recognized her concept in later technological developments and sometimes pointed it out.

Born Hedwig Eva Maria Keisler, to a family of assimilated Jews in Vienna, Lamarr was the adored child of a father who loved to tell her how things worked. She left school at the age of 16 to become an actress. (Her first director decreed her "the most beautiful girl in the world," a epithet later picked up by Hollywood publicists.) At 19, she starred in a film "Ekstase" ("Ecstasy") that featured blurry shots of her swimming and running through the woods in the nude, making herself mildly notorious. The same year, fatefully, she married Friedrich "Fritz" Mandel, a rich, powerful and charismatic arms manufacturer 13 years her senior.

Almost immediately, she realized her mistake. Controlling and jealous, Mandel tried to buy and destroy every copy of "Ekstase" and forbade his trophy wife from any further acting. Lamarr would later recall being "watched and guarded and followed night and day." She described her escape from the marriage and, ultimately, to America, as just that, a flight in the dead of night from a "beautiful, jeweled case."

Before she left, however, Lamarr spent plenty of time soaking up the conversation around her husband's dinner table. His guests were fellow weapons designers and manufacturers with right-wing connections, men who did not realize just how much she understood. Lamarr's famous, caustic advice to women who wanted to be glamorous was to "stand still and look stupid," and the same trick surely came in handy when she wanted people to underestimate her.

Rhodes characterizes Lamarr as an "inventor," rather than an engineer or scientist. She set up a little workshop in her Hollywood home, and between films she tinkered on an assortment of projects. Howard Hughes once sent over a couple of chemists to help her with a scheme to concoct a dehydrated soft drink. For her more martial ideas, she enlisted Antheil -- who'd spent much of the 1920s in Paris rubbing shoulders with the likes of Ezra Pound and Man Ray -- because he'd once worked as a weapons inspector in an armory. They also collaborated on a method to detonate missiles that just miss their airborne targets.

Antheil turned out to be a particularly fortuitous choice for the torpedo guidance system because his most famous composition, "Ballet Mechanique," not only provoked a riot when it was first performed in 1925, but also featured 16 synchronized player pianos. Together, starting from Lamarr's idea, they devised a pre-digital way to synchronize a radio transmitter and a receiver so that they can simultaneously switch from frequency to frequency while communicating a message. Signals transmitted on a single frequency can be easily located and jammed, but not a signal that is jumping randomly among, say, a few dozen different frequencies. (This technique, which Lamarr dubbed "frequency hopping," is now subsumed within the broader term "spread spectrum.")

The Navy buried the patent for various complex reasons, but Lamarr and Antheil's invention was eventually dusted off and employed in a variety of military and civilian communications systems during the 1950s and onward. (If you use Bluetooth devices, you use frequency hopping.) For a while, the actress and the composer had more or less forgotten the patent, which expired in 1959. Later, Lamarr would occasionally complain to the press, but it wasn't until the 1990s that she found a champion in Dave Hughes, a longtime member of the online community the Well (now owned by Salon). He brought her achievement to wider awareness and, in 1997, she received a Pioneer Award from the Electronic Frontier Foundation.

Rhodes, who won the Pulitzer Prize for his 1986 book, "The Making of the Atomic Bomb," unites the social history of Vienna, the classic era of Hollywood film, Paris in the '20s, experimental music, weapons design, the niceties of patent law and the technology of information transmission -- a real grab bag of elements -- in this short, charming and remarkably seamless book. He makes a rigorous effort to establish exactly what Lamarr contributed, rescuing the truth from both belittlers (Antheil himself vacillated between giving her credit and making patronizing remarks about the notions in her "beautiful, beringleted head") and Hedyolators.

Rhodes titled the book "Hedy's Folly" in part because her contemporaries regarded Lamarr's inventing as entirely superfluous to her career as a star and in part because she dared to believe that her creation would be welcomed by the Navy. It was an institution, as Rhodes puts it, unlikely to be "prepared to take correction from a Hollywood actress ... in a matter about which it was not prepared to listen to its own submarine commanders." In the end, she used her fame to raise millions of dollars for war bonds instead. "She deserved better," Rhodes writes, than to be judged by that spectacular face alone, and now, at last, she is.