The first time Mitt was scared of Newt 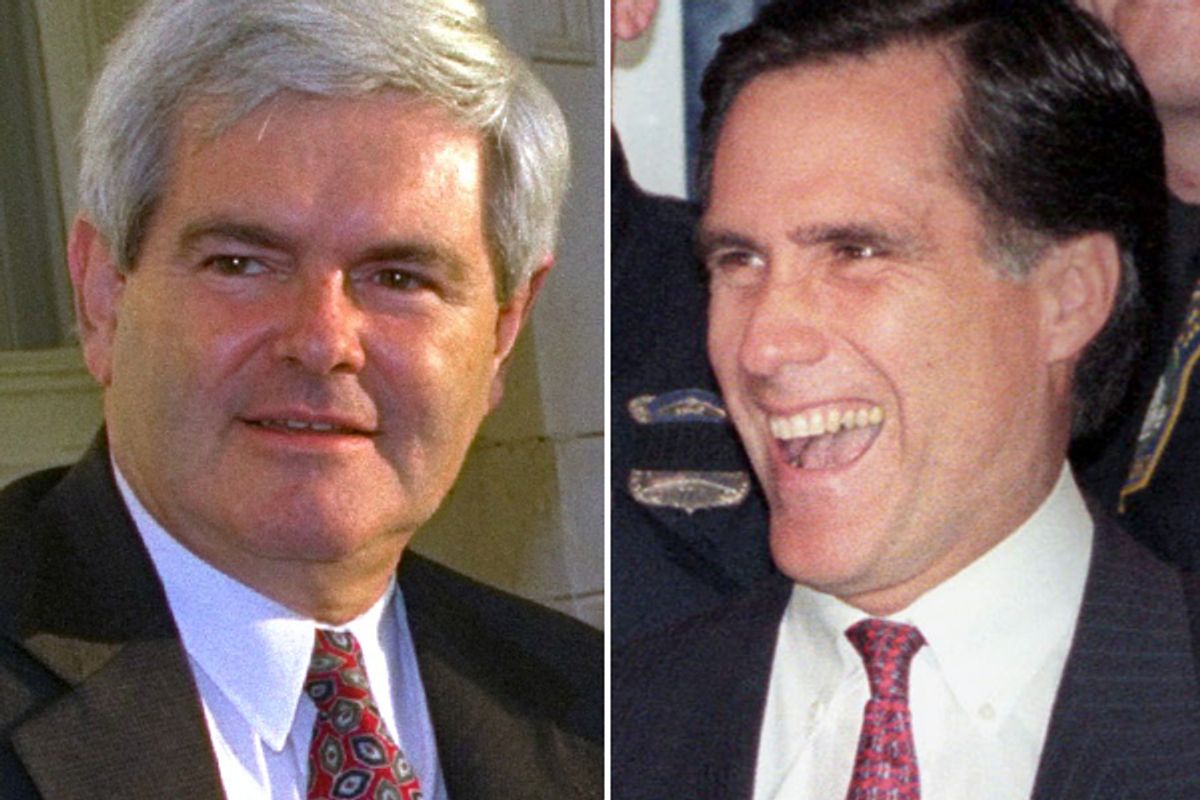 Newt Gingrich is the latest Mitt Romney rival to surge into contention in the Republican presidential race, grabbing slim leads in several recent polls and snagging a prized endorsement over the weekend. Now he's scrambling to cement his status as the Tea Party movement's last best hope to deny Romney the nomination, declaring on Monday that "I don't claim to be the perfect candidate, I just claim to be a lot more conservative than Mitt Romney and a lot more electable than anybody else."

There are countless reasons to believe that Gingrich's baggage and self-destructive tendencies will ultimately sink him, but he's also talented enough to make Romney sweat a lot more than any of the other non-Romney candidates have so far. In other words, he could have staying power. And he could prove to be the most serious threat to Romney's supposed inevitability.

Interestingly, this isn't quite the first time that Gingrich has emerged as an obstacle on Romney's path to political glory. Their ambitions also collided, albeit it in a much less direct and dramatic way, back in 1994, when Romney was waging a campaign for the U.S. Senate in Massachusetts and Gingrich was overseeing the GOP's efforts to win a House majority.

Back then, Gingrich was not yet an instantly polarizing political figure, but he was well on his way. As the leader of a band of aggressive conservative Republicans in the House, he'd won headlines in the '80s and early '90s with ferocious and often personal attacks on Democratic members of Congress. His crusade against Jim Wright, which led to the House Speaker's 1989 resignation, was probably his crowing feat as a partisan warrior. By '94, Gingrich had made his way into the No. 2 GOP leadership post and was poised to take over the top spot, with Minority Leader Robert Michel declining to seek reelection.

Thus, when he brought hundreds of Republican congressional candidates to Washington early that fall to sign the Contract With America, a 10-point agenda that Gingrich hoped would nationalize the midterm elections, Democrats saw a chance to turn Gingrich and his contract into liabilities for the GOP. Democratic candidates began assailing their GOP foes for signing a document that, in their telling, would gut Medicare, paper the rich, and blow a massive hole in the deficit. Gingrich himself was portrayed as a dangerous ideologue, as Democrats recycled some of his more inflammatory past quotes.

But it wasn't just Democratic House candidates who saw Gingrich as a weapon, which is where Romney came in. He was putting a scare into Ted Kennedy in the fall of '94, even leading by 2 points in one mid-September poll. The Kennedy campaign and its allies added Gingrich to the list of conservative boogeymen they'd reel off in an effort to scare the Bay State's moderate-to-liberal swing voters away from Romney and the Republican column. Among other things, they demanded that Romney take a position on the Contract With America. When he refused, Kennedy's campaign charged that Romney was "afraid the people of Massachusetts will realize he truly is the candidate of Jesse Helms and Phil Gramm and Newt Gingrich." This was a common refrain from Massachusetts Democrats that fall: that a vote for Romney would empower a party led by Gingrich and other extremists.

The Kennedy attacks ultimately wore Romney down, who ended up losing by 17 points. While Gingrich was hardly a major figure in the campaign, his bit part ended up serving as a preview of what was to come. With Republicans gaining control of the House in the November elections, Gingrich became one of the best-known political leaders in the country -- and his abrasive, erratic style (to say nothing of the ethics controversies that immediately kicked up) quickly made him one of the most unpopular, too. By the fall of 1996, Democrats across the country were basing their entire campaigns on efforts to link their opponents to Gingrich. The impact was particularly acute in Massachusetts, where the state's two GOP congressmen lost their seats to Democratic challengers who waged anti-Newt campaigns. Fifteen years later, Republicans still have yet to win another House seat in the state.