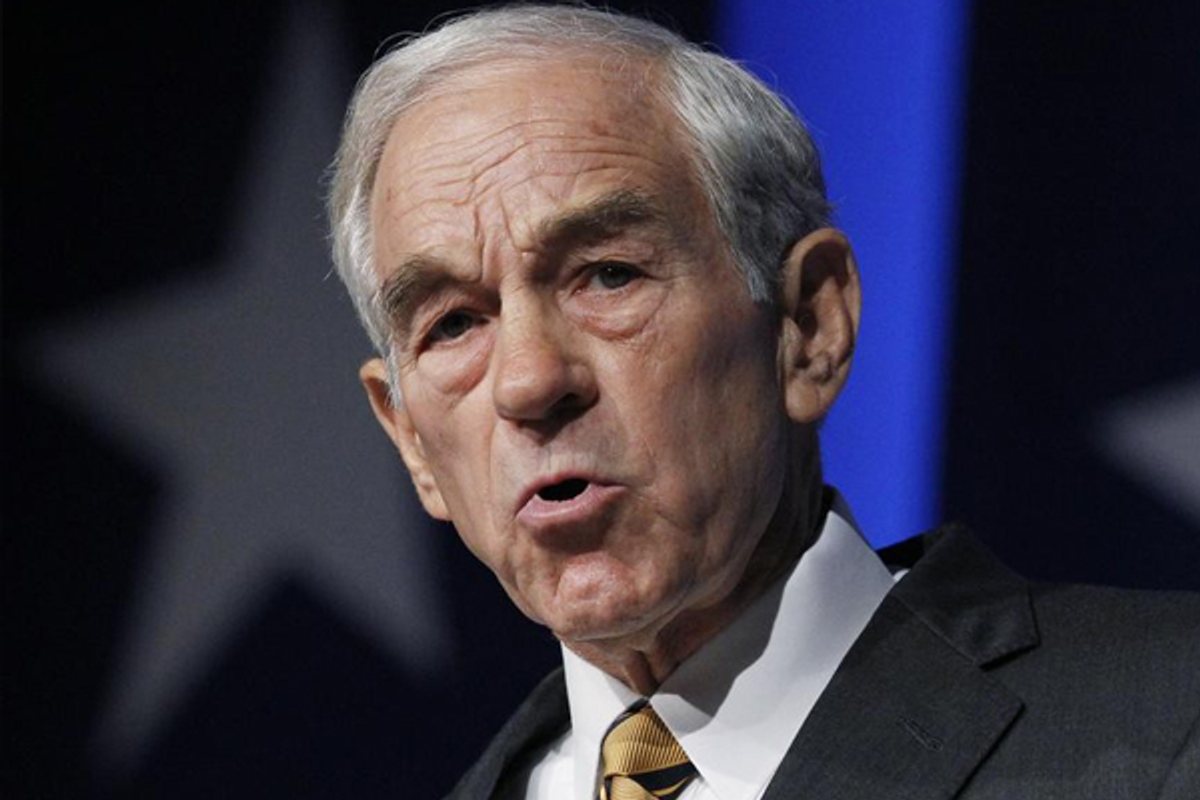 Despite a sustained campaign by the Washington media and political establishment to marginalize him, Rep. Ron Paul, R-Texas, is still a serious contender for the Republican presidential nomination. That has a lot to do with the support he's receiving from young voters. In almost every survey and activist straw poll, Paul draws big numbers from voters between the ages of 18 and 29.

The laziest way to explain the counterintuitive phenomenon of youth rallying around the GOP's oldest candidate is to insist that it's about kids' silly college fling with unrealistic libertarianism or that it's about kids' affinity for drug use -- and more specifically, Paul's support for legislation that would let states legalize marijuana. This degrading mythology ignores the possibility that young people support Paul's libertarianism for its overall critique of our government's civil liberties transgressions (transgressions, by the way, now being openly waged against young people), nor does the narrative address the possibility that young people support Paul's drug stance not because they want to smoke weed, but because they see the War on Drugs as a colossal waste of resources. Instead, Paul is presented as merely a fringe protest candidate, and the young people who support him are depicted as just dumb idealists, hedonistic pot smokers or both.

One problem with this fantastical tale, of course, is that it insults the intelligence and motivation of young voters. But another, even more troubling facet of this tale is how it uses speculative apocrypha and stereotyping about ideology and drugs to suppress concrete social survey data about the far-more-likely foreign policy motivations of young Ron Paul supporters.

Paul, of course, is one of the only presidential candidates in contemporary American history in either party to overtly question our nation's invade-bomb-and-occupy first, ask-questions later doctrine and to admit what the Central Intelligence Agency acknowledges: namely, that our military actions can result in anti-Americanism fervor and terrorist blowback.

Predictably, Paul's foreign-policy honesty has generated Washington media scorn (most recently and explicitly, as Glenn Greenwald points out, from CBS News' Bob Schieffer). No doubt, that scorn has much to do with that media being disproportionately older, more establishment-worshipping and more hyper-militaristic than the general population. But far away from D.C. green rooms in Real America -- and especially among younger voters -- Paul's foreign policy positions are generating the opposite of scorn. Indeed, as a new Pew Research Center report suggests, these positions are almost certainly a driving force behind the support for his candidacy.

The new study tracks how younger voters are now strongly rejecting traditional American hubris in favor of Paul's more empirical views on foreign policy. For instance, it finds that while older citizens embrace American exceptionalism in insisting our culture is inherently superior, younger voters do not. But the key finding as it relates to Paul's candidacy has to do with blowback, which Paul frequently discusses on the campaign trail. As Pew reports (emphasis mine):

Two-thirds of Millennials (66 percent) say that relying too much on military force to defeat terrorism creates hatred that leads to more terrorism. A slim majority of Gen Xers (55 percent) agree with this sentiment, but less than half (46 percent) of Boomers agree and the number of Silents who share this view is 41 percent. A plurality of Silents (45 percent) believe that using overwhelming force is the best way to defeat terrorism and 43 percent of Boomers share that view.

These findings have been largely ignored by the media and political establishment. That's predictable. These poll numbers undermine the dominant fairy tale that Americans universally support status-quo militarism -- and so they are largely omitted from the media discussion of the presidential election. It's the same thing for Paul's foreign policy positions in general -- they are either ignored or mocked by a political and media culture that is ideologically invested in marginalizing them.

Nonetheless, there are two good pieces of news in all this.

First, whereas in earlier eras such establishment hostility to a politician's position could prevent that candidate from making a serious run for president, polls show Paul's foreign-policy message is likely getting through to a key demographic, giving him a genuine shot at his party's nomination.

Second, whether Paul eventually wins the GOP nomination or not, the trends embedded in his current electoral coalition will affect our politics long after his candidacy is over -- and even if you don't support Paul's overall candidacy, that's a decidedly positive development for those who favor a new foreign policy. (A brief side note: This article is in no way a personal endorsement of Paul's overall campaign -- I have serious problems with some of his economic positions.)

With the defense budget bankrupting our budget and with our imperialist foreign policy making us less safe, the younger generation's rejection of hubris and hyper-militarism -- and that generation's willingness to support candidates in both parties who similarly reject that militarism -- provides a rare ray of hope in these political dark ages. And not just a fleeting hope -- but a long-term one.

As the Pew data show, the younger generation, whose foreign policy views were shaped not by World War II triumphalism but by grinding quagmires like Iraq and Afghanistan, has a far more realistic view of America's role in the modern world. While that position may shift somewhat over the years, the numbers are striking enough to suggest an impending cultural break from the past. As the younger generation assumes more powerful positions in society and more electoral agency in our democracy, the possibility of such a break gives us reason to believe America can create a new foreign policy paradigm in our lifetime.