It may be the subject of a new Michael Fassbender flick and buzzy cover story, but an expert calls it a "myth" 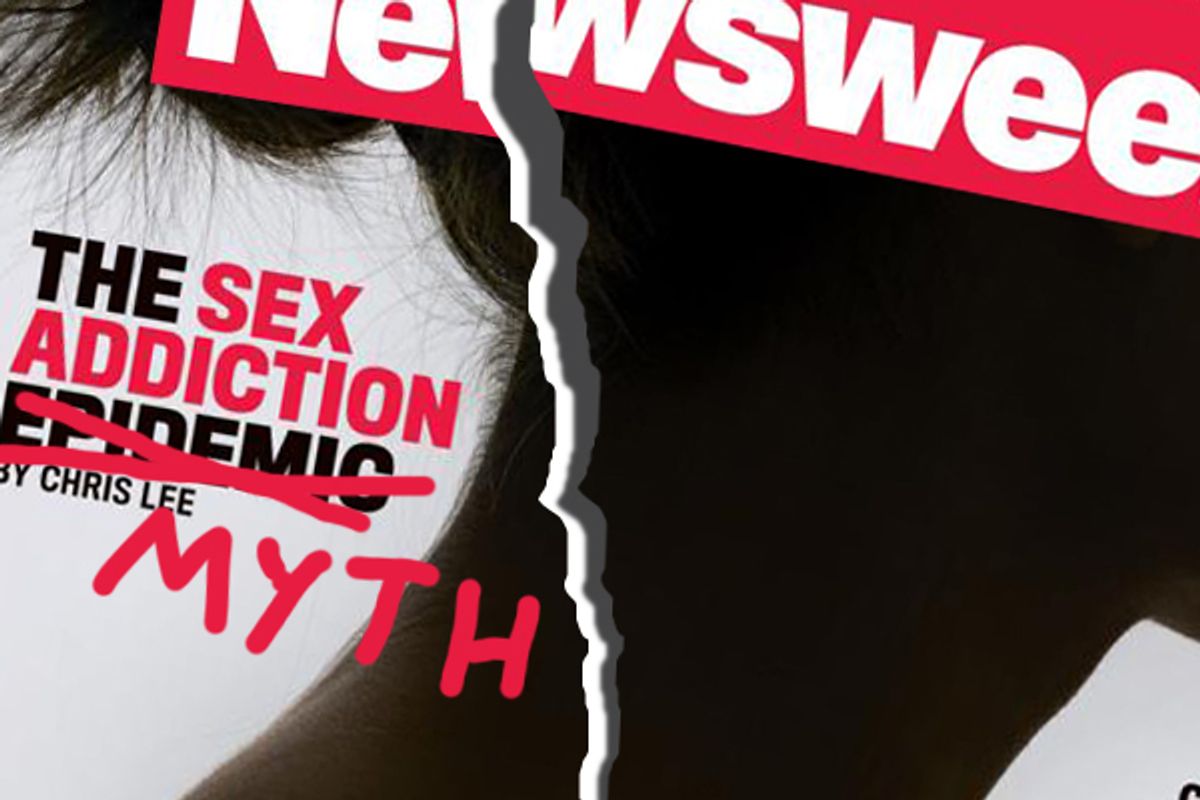 The Newsweek cover model's bare shoulders and protruding clavicles seem to signal weakness, vulnerability, illness. She's captured turning away from the camera and a pull-quote is stamped across her head: "I lost two marriages and a job. I ended up homeless. I was totally out of control." The all-caps headline dramatically spells out her troubles: "THE SEX ADDICTION EPIDEMIC."

The sexy alarmism of Newsweek's latest cover story is irresistible -- but it should be viewed with extreme skepticism. Mental health experts haven't come to the consensus that sex addiction even exists, let alone that it's an epidemic. The cultural phenomenon of sex addiction, which I first wrote about in 2009, is just that: A cultural phenomenon, not a legitimate medical diagnosis, and the release this week of the much buzzed-about "Shame," a sex-addiction drama starring Michael Fassbender, further secures the concept's place in the zeitgeist. Never mind that it was rejected from the upcoming revision of the Diagnostic and Statistical Manual of Mental Disorders (DSM), psychiatry's bible.

In the interest of countering the Newsweek narrative, I gave clinical psychologist David Ley a call. I figured he might have a thing or two to say on the topic, given that for the past year he's been working on the upcoming book "The Myth of Sex Addiction" -- and did he ever.

Have you had a chance to read the Newsweek cover story?

I did. It's the same old story.

And what is the same old story, exactly?

There's a gross over-representation and exaggeration of research. The sex-addiction concept is a belief system, not a diagnosis; it's not a medically supported concept. The science is abysmal.

What's the worst example of the pseudo-science?

The thing that drives me craziest is that over the past year or two, [proponents of the sex addiction model] have started trying to use brain science to explain it. They're now talking about morphological changes that supposedly happen in the brain as somebody watches porn or has too much sex. The reality is, careful scientists will tell you they are absolutely unable to identify any brain differences between these alleged sex addicts and non-sex addicts. The other thing that they'll tell you is that the brain changes constantly -- any behavior that a person engages in, especially repetitively, changes your brain. So, identifying changes related to this sexual behavior and distinguishing it from anything else is absolutely ridiculous.

What they're doing is trying to build credibility. The major way that they build credibility is through metaphor, or "valley-girl science," as I call it. They will tell you, and [the Newsweek] article is a good example of it, that sex addiction is like an eating disorder, it's like a heroin addiction. The reality is this is an incredibly weak form of argument, because it's so subjective; and when they tell you that sex addiction is like an eating disorder, they don't tell you all the things that are different about it. They live by anecdotes, because they don’t have good science.

It seems the question underlying the whole conversation is: What does a healthy relationship to sex look like?

They are typically unable to put forth a healthy model of sexuality, and when they do, it is so transparently conservative and religiously driven that it's frightening. Most of the leaders of the sex-addiction movement are themselves recovering supposed sex addicts and religious folks. That's fine, it's fine for them to be advocating, but what they're advocating for is a moral system, not a medical one.

A lot of the research that has been done shows that between 70 and 100 percent of these alleged sex addicts have some other major mental-health problem -- there is some other diagnosis, whether it is substance abuse, depression, anxiety or a personality disorder. It violates Occam's razor to then throw in a sex-addiction diagnosis when these behaviors are just symptoms of the underlying mental illness.

The other thing is, why are we singling out this one behavior as a problem? There are people who do model trains obsessively: They focus their life on it, their relationships end because of their interest in this, they fill their houses with these model trains --

But we aren't rushing to subject them to brain scans.

Exactly, right. This is a moral attack on sexuality. They it is in the interest of people to build and develop fear of sex. Because they think that if we're not afraid of sex, people are going to go out and have lots of sex. God forbid.

What cultural forces are bringing this to the fore right now?

I think it's a perfect storm. It's the media and the transparency of our society. All of these behaviors have been happening for millennium -- people cheating, people having lots of sex, people viewing pornography. There's nothing new about this. But all of a sudden we have this 24/7 media that is hungry for scandals. "Gotcha" journalism grabs an audience by putting out a sound bite, a meme, as quickly as possible, regardless of how true it is. The memes that grab the most are black-and-white, two-dimensional concepts. Rather than explaining that there are thousands of reasons a person might engage in infidelity, it's easier to say: Sex addict.

Does it make people feel more secure, like the threat of infidelity is contained to a "disordered" or "addicted" population? Blaming infidelity on sex addiction might be easier than questioning monogamy or our expectations for long-term commitments.

Yep. Instead of examining the application of the concept of monogamy over a 30- or 40-year marriage, and looking at how male sexuality works, it's much easier to say: "Well, it's a disease." I include a quote in my book where a woman says, "When my husband was cheating, it really was a comfort to consider it a disease and that it really wasn’t his fault. Finally, I had to realize that it wasn't a disease, it was just him being selfish and treating my life and health casually." If we look at it as a choice, what changes?

What is the risk of the spread of the sex-addiction model?

There is a dramatic risk of stigma and over-diagnosis. Gay and bi men often engage in significant promiscuity that is outside the norm for heterosexual men, and certainly for heterosexual women -- are they eligible to get diagnosed as sex addicts? Yeah. A social worker I talked to at a mental hospital told me that whenever an LGBT person was admitted onto the psych ward, they automatically considered them as having hypersexual disorder, because they were concerned that person might act out sexually on the unit.

There's incredible risk of pathology here -- we only need to look at the history of nymphomania to see that. Women had their clitorises removed they were subjected to electroshock therapy, all kinds of medication. When female sexuality was diagnosed as a disease. Now male sexuality is diagnosed as a disease, only instead of getting electroshock therapy they get the country-club treatment for 30 days.