How Wall Street occupied the Fed

Ben Bernanke kept the banking sector from collapsing. Why didn't he do the same for Main Street? 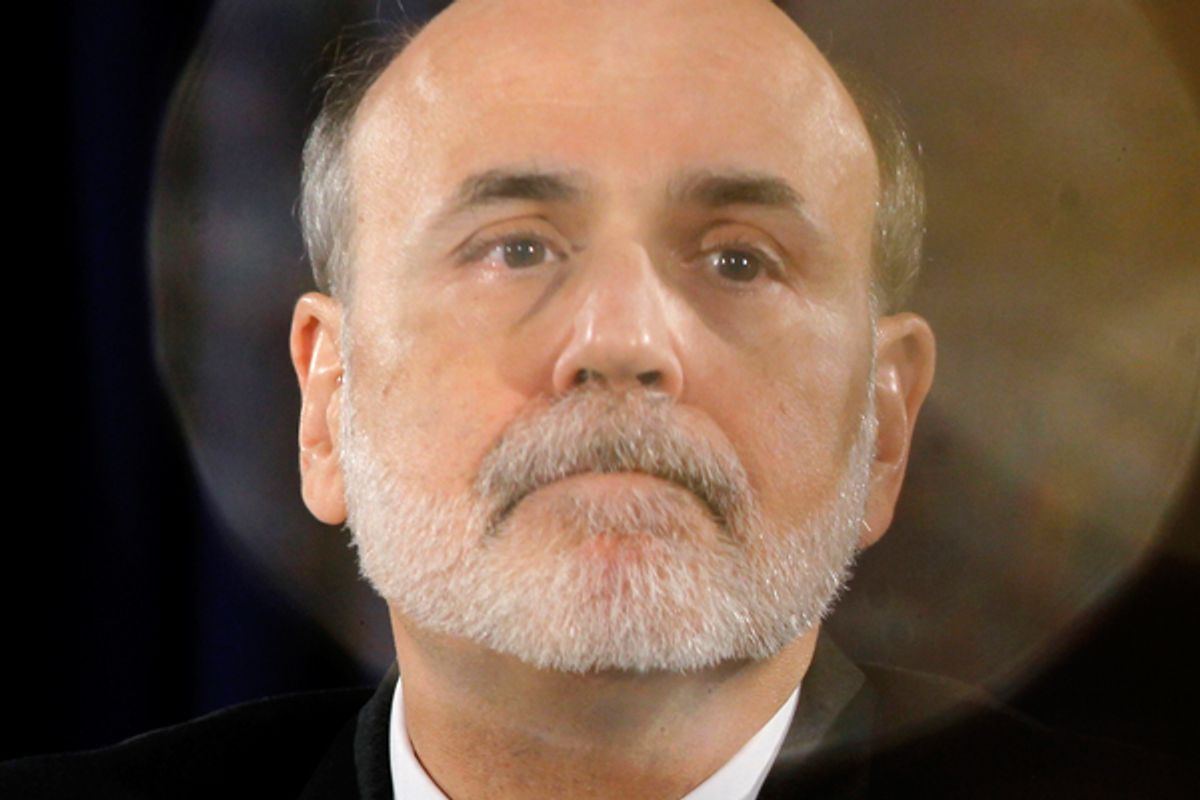 Bloomberg's fabulous report on the Federal Reserve Bank's "secret" bailout of U.S. banks is an example of dogged enterprise journalism at its very best. The Fed fought Bloomberg's Freedom of Information Act requests to get details of its huge loan program all the way to the Supreme Court. But Bloomberg prevailed, and on Sunday night, the news organization published its long-awaited findings, making it abundantly clear just how much the U.S. banking system -- and in particular, the six largest banks -- benefited from the Fed's helping hands.

Just to put things in perspective,  the Fed "committed $7.77 trillion as of March 2009 to rescuing the financial system, more than half the value of everything produced in the U.S. that year." That's also more than 10 times the size of TARP -- the bailout administered by the U.S. Treasury. It's no wonder that a long line of banking spokespeople and financial institution CEOs refused to comment to Bloomberg for the story. What's left to say?

The report is must reading for followers of the emerging history of the financial crisis for obvious reasons. But tracking the reaction to the revelations from some liberal commentators to the news has been intriguing. Paul Krugman, Matthew Yglesias (newly ensconced at Slate), Mother Jones' Kevin Drum and Mike Konczak at Rortybomb are all singing the same tune: The problem, they say, is not that the Federal Reserve moved heaven and earth to shovel trillions of dollars at the banking industry -- that, in fact, is exactly what you want the central bank to do in the middle of a banking panic. That's how Great Depressions are prevented.

The outrage, they all agree, is that the same determination and all-in blitzkrieg wasn't aimed at unemployment and the foreclosure mess and the myriad woes affecting the rest of America. The 1 percent got a gift-wrapped bonanza, while the 99 percent got the shaft. As soon as the financial panic subsided and stock prices started to rise, policymakers started worrying far more about inflation and deficits than actual human suffering. And that's unacceptable.

I personally have no argument with that basic thesis. We can definitely question the exact tactics employed, and speculate, as do the above-mentioned commentators, on whether Obama would be better off, politically, if a harder line had been taken against the banks, in return for saving their bacon. But I too am glad that, bottom line, the Fed stabilized the financial sector. The 99 percent would have an even harder time finding jobs if the six biggest banks had gone bankrupt.

But I find myself wondering how this nuanced interpretation intersects with the anti-Wall Street animus that bubbles in the hearts of both Tea Partyers and Occupy Wall Street protesters. For fully understandable reasons, there's a sizable contingent of Americans who would take pleasure in the sight of Bank of America, Citigroup, Goldman Sachs and JPMorgan Chase crashing and burning. At the conservative end, there are many who believe that nobody should get bailed out, period. On the liberal end, there's a sense that government aid to the banking sector has aided and abetted growing income inequality. At the voter level, there's very little appetite, at any point on the spectrum, for a "well, some actions, even if we don't like them, are necessary for the greater good."

Politically speaking, such a dynamic spells trouble for Obama in the year ahead. His Republican opponents will surely use the Bloomberg report to tap popular anger and slam the Fed. Everyone, on this platform, is a wannabe Occupy Wall Streeter. Whoever ends up as the Republican presidential nominee will be under no obligation to explain that sometimes the medicine doesn't taste very good. Meanwhile, Obama faces the unhappy prospect of defending the nasty medicine that kept Wall Street afloat while simultaneously explaining why his administration hasn't been able to engineer a similar rescue effort for Main Street.