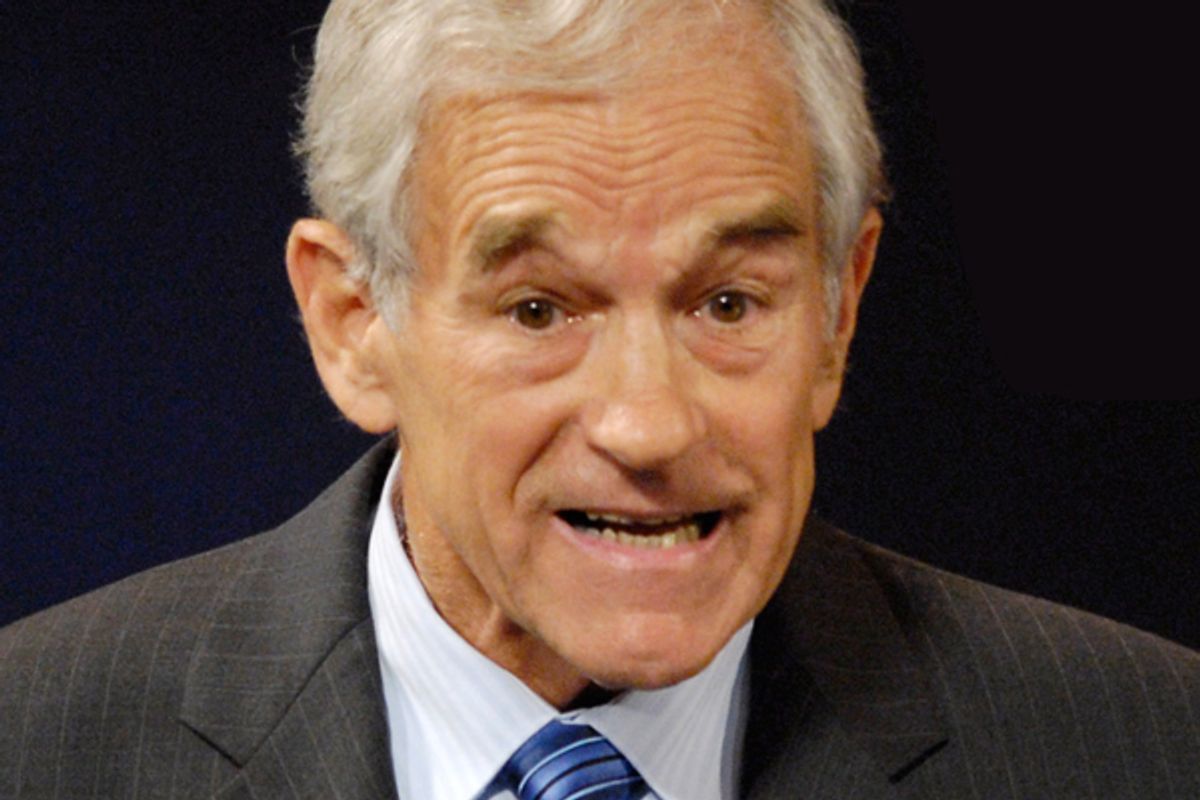 To me, the epiphany of the most dreadful presidential campaign in history took place in Keene, New Hampshire, last week, when a Ron Paul town meeting was interrupted by some Occupy Wall Street hecklers.

"Let me address that for a minute,” the Republican presidential candidate said, “because if you listen carefully, I’m very much involved with the 99. I’ve been condemning that 1 percent because they’ve been ripping us off --” He was interrupted again, this time by cheers, almost drowning him out.

After the usual chants of "We are the 99 percent" and "There are criminals on Wall Street who walk free," Paul quickly took back the audience, not that he had ever lost it. “Do you feel better?” he asked, to laughter.

“We need to sort that out, but the people on Wall Street got the bailouts, and you guys got stuck with the bills, and I think that’s where the problem is.”

It was a masterful performance. Ron Paul — fraudulent populist, friend of the oligarchy, sworn enemy of every social program since Theodore Roosevelt — had won the day, again.

Why shouldn’t he? Frauds win, whether they are in finance or politics. Bernie Madoff proved that, and so did Ronald Reagan. The success of the Ron Paul campaign with young voters, which David Sirota pointed out in Salon Monday, is but the latest example of how Americans can be persuaded to support the most reactionary politicians in America when they're suitably manipulated, even if they aren’t reactionary and, sometimes, even when they identify themselves as progressive.

There’s little doubt that aspects of his message are both appealing and sincere. There is a definite “yay factor” in some of his oratory, and his denunciations of Dick Cheney are the kind of thing that gets yays on "The Daily Show With Jon Stewart."

Paul has been consistent in opposing the wars in Iraq and Afghanistan, and in opposing American military adventures in general. He has staked out a lonely position as the only presidential candidate to oppose aid to Israel (until Rick Perry more or less aped him on that), and his distinctly non-aggressive posture on Iran is indistinguishable from that of dovish Democrats like Dennis Kucinich.

So there’s no question that there’s a lot to like in Paul’s foreign policy positions, if you’re leaning to the left. The problem is that Paul is less of a 21st century dove than he is a throwback to the isolationism of the early to mid-20th century, in which fear of foreign entanglements was embraced by the hard right — with all that came with it. Paul emerges from that mold as about as far right as they come, further right than Ronald Reagan ever was, more of an enemy of the poor and middle class, and an even warmer friend of the ultra-wealthy. A Ron Paul America would make the Reagan Revolution look like the New Deal.

Paul’s own oratory tends to deemphasize his reactionary stance on social issues, or to sugarcoat it. But his program is now laid out in black-and-white. Last month, the Paul campaign set forth the details of what it grandiloquently called a “Plan to Restore America.”  It has received surprisingly little attention, given Paul’s surging popularity.

This is not a plan for the 99 percent. It is about as much of a 1 percent-oriented ideological meat cleaver as you can find anywhere in the annals of politics. Paul would take an ax to the federal budget, hacking off $1 trillion in the first year alone, ripping and cutting and deenacting and deregulating so as to ostensibly return America to “its former constitutionally limited, smaller-government and less-burdensome place.”

“Return” implies that America would be taken back to a starting place, though it’s not clear where that would be. What I do know is that there is definitely an undercurrent to his slash-and-burn philosophy, a strong whiff of Ayn Rand — the Russian-born philosopher-novelist, atheist and advocate of individuality, rational self-interest and selfishness. Paul is, in fact, the closest of all the GOP candidates to carrying out the anti-government policies Rand advocated.

To be sure, there are aspects of this budget plan that hardcore Randers would not like. It leaves in far too many nonessential government functions, such as allowing the continued existence of the Department of Health and Human Services. But, from the Randian perspective, Paul is definitely moving in the right direction. His “restore” plan embraces the kind of deprivation that Rand’s Objectivist philosophy would impose on America, and would enact a fundamental change in the role of government that the radical right cherishes.

After spelling out the good stuff from the leftist perspective — a 15 percent Defense Department spending cut ending all funding for the wars in Iraq and Afghanistan — the hard charge backward commences:

His opposition to the very existence of the Federal Reserve — he wrote a book titled “End the Fed” — is straight out of Rand, as is his promotion of the gold standard.

Paul would not reform the abysmally flawed and underfunded Securities and Exchange Commission, he would eliminate it. The only agency of the federal government that stands between the public and greedy bankers and crooked corporations would be gone. He is philosophically opposed to it, as he is to Sarbanes-Oxley and Dodd-Frank, the reform measures enacted after Enron and the 2008 financial crisis, respectively. His Reformed America would no longer discomfit Wall Street with the latter’s restrictions on banks or annoy corporate executives with Sarb-Ox’s ethics and fair-disclosure rules.

And this is but the beginning of the shower of blessings that would rain down upon the very richest Americans. He would end the income tax, thereby making the United States the ultimate onshore tax haven. The message to both the Street and corporate America would be a kind of hyper-Reaganesque “Go to town, guys.” With income, estate and gift taxes eliminated and the top corporate tax rate lowered to 15 percent (and not a word about cutting corporate tax loopholes), a kind of perma-plutonomy would come to exist in the land — to the extent that there isn’t one already.

The guts of Paul’s grand scheme, where its rubber hits the road, is in the all-important theme of cutting programs that benefit the poor and middle class. Despite all its window-dressing and spin, the heart of every libertarian plan for this country is a kind of mammoth subtraction: making deep cuts in programs benefiting millions of Americans, out of a belief that such programs are morally wrong. Restoring America is a moral statement, an enshrinement of the Randian belief that aid to one facet of the population (the poor) is really “looting” of resources from other facets of the population (the wealthy).

So when you see in this plan a $645 billion cut in Medicaid over four years, what you are seeing is an expression of the philosophy that Medicaid itself is wrong, that it should not exist because it is not the function of society to provide healthcare for the poor. If they get sick, tough. While Paul does not go the full Randian route by entirely eliminating this program, he goes a long way to establish the principle that as a general proposition, as a moral question, we simply should not have this program.

Ayn Rand believed that there is no such thing as a “public,” and that the public was a collection of individuals, each having no obligation to the other.  So when you read through this budget, and see the deep cuts in food stamps and child nutrition, what you are seeing is an expression of a philosophy that is at odds with the Judeo-Christian system of morality embraced by most Americans.

That, fundamentally, is what the deficit debate is all about, from the perspective of Ron Paul and the radical right. It’s not about getting the red ink out of the government but using the government’s fiscal travails as a pretext to change the very purpose of government. So yes, he opposed the Wall Street bailouts, as Rand no doubt would have, and that also is “yay”-worthy to many people. But if you buy that, if you buy Ron Paul, you have to buy the rest of his belief system: his opposition to securities regulation, his opposition to consumer protection, his belief that the markets can defend Americans from the depredations of big business.

What I’ve just described is many things, but it is the very antithesis of the values of Occupy Wall Street, which is based on opposition to the prerogatives of the top 1 percent at the expense of the 99 percent. Yet rather than forthrightly oppose OWS, which would at least be intellectually honest, Paul has sought instead to co-opt it, con it, calling it a “healthy movement” at one appearance, and seeking to link it with his “end the Fed” agenda. In Keene he went one step further by declaring himself as being in league with the 99 percent and against the 1 percent.

That’s about as far from the truth as it possibly could be. The only question is, how long is Paul going to be allowed to get away with his faux-populist con job? I agree with his backers in this sense: He is less of a fringe candidate than he is sometimes portrayed in the media. His positions are increasingly infecting mainstream Republican politics, and it’s scary.

No, strike that. His positions are scary only if you know what they actually are, and not how he spins them.