A teepee grows in Oakland

As camps are raided and evicted elsewhere, the city's movement builds a symbol -- and searches for purpose 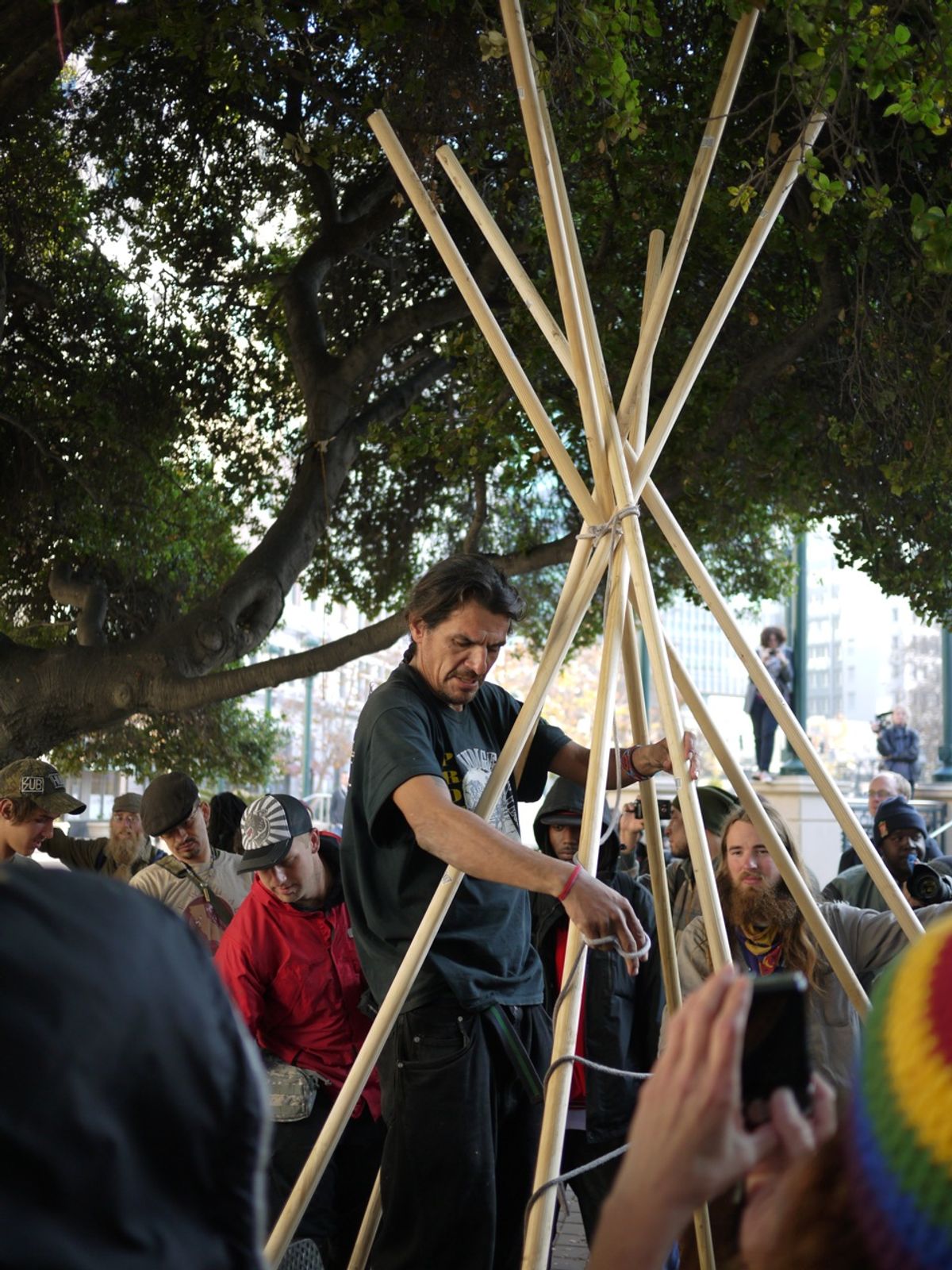 OAKLAND -- As evicted Occupy groups around the country suffer further dispossession (L.A. and Philadelphia camps were raided by police last night) the press release from Occupy Oakland read like a signal flare. At noon Tuesday, it announced, activists would retake Frank Ogawa Plaza and "create a model for a new wave of 'Occupation' protest throughout the United States."

What actually happened was a little more ambiguous, to say nothing of strange. Also, it revolved around a teepee.

To invest in the high-volume, low-boil soap opera that seized a tiny corner of downtown Oakland today, one must trace Occupy's strange evolution in recent weeks, and then one must throw all that out because Oakland's its own weird thing. Militant, politically shrewd, economically screwed, energized, immature, determined, obsessive, scarred or none of the above, the Bay Area city has a proud history of inspiring passionate ambivalence. Occupy Oakland, for its part, is either a can of Jolt for a flagging international movement, or an embarrassment to a steadier one. Depends whom you ask is often as true about Oakland as it is about Occupy.

Frank Ogawa Plaza, aka Oscar Grant Plaza, has mostly been a calm acre of mud and patchy grass lately. The craziness that made the news has given way, via forcible eviction, to quiet clusters of discussion and coordination. On the eve of the planned re-occupation, I attended a chilly 6 p.m. general assembly meeting, plus another meeting about the Dec. 12 port blockade being planned. If Tuesday was to be the big day, I wanted to look in on a little one first.

The Occupy Oakland activists are a wily crew, and via supernatural anarchist powers they intuited my approach. Away went the bongos and weed and guns and bricks and frivolous liberal arts degrees. Out came a different terror, the agony of patient, sensible, rational, mind-numbing democracy.

"Point of process," an older gentleman in a baseball hat was saying to a semicircle of 60 or so people, and I can no more transcribe what followed than I could the terms and conditions of my iTunes agreement. In the most tediously civil and cogent manner possible, the assembled 20-through-60-somethings spent an hour discussing the logistics of the port blockade. Should it start at 6 a.m.? Could someone get in touch with the truckers tomorrow? Point of information. Point of clarification. Straw poll? Very good, thanks, everyone.

It was lovely, and inspiring, and utterly incompatible with daily journalism, which prefers the kind of fireworks sure to come the next day. No bargain with the city had been struck. "If the 1 percent won’t share voluntarily ... we will force change!" the press release had promised. It was anybody's guess how police would respond, and the guessing had been tending toward pessimism.

When I returned in the morning, I did so with obligatory vinegar-soaked dishrag in my bag, but mostly it seemed inconceivable the city would pepper spray its way onto the front pages again. Many of the Occupiers I met seemed to feel the same, but with asterisks.

"Every time we say the police aren't going to do something dumb, they surprise us," Becca Von Behren told me in the hours before the vigil.

Von Behren, 30, is an attorney with a San Francisco veterans rights group and part of Occupy Oakland's volunteer legal committee. There's no clearer picture of a 99 percenter than a veteran my age, she told me. Over the last few days Von Behren was instrumental in helping to devise the legally savvy underpinning of the day's planned vigil. The idea rested on precedent from a 1984 case called  Clark v. Community for Creative Nonviolence. As she and another attorney from the committee explained it to me, that case established that elements of a protest designed for expression were protected by the First Amendment -- even tents and teepees, if they're used as symbols rather than for sleeping.

"Sleeping is not protected -- they can ban that," Von Behren said. "We'll have a permanent and meaningful structure in the plaza, but nobody will be sleeping in it."

I asked her what the meaning was. Specifically, I asked her how I should explain it to my mom, a proxy in my mind for everyone with growing sympathy for the movement and growing doubts about its tactics.

"Here's what I said to my mom," Von Behren said. "Regardless of whether measurable changes occur -- and I'm not even sure what the metric would be -- there are people out here involved in direct, deliberative democracy, discussing things usually not discussed among strangers. That kind of awakening is enough."

Ten minutes later Zachary RunningWolf was standing before a small crowd in front of City Hall. RunningWolf is an elder from the Black Feet tribe and something of a celebrity in tree-sitting circles. A growing collection of police officers stood behind him, either smirking or being moved, it was hard to say. The crowd was being moved. The teepees would remind the public of the struggles of the Sioux, and of homeless workers during the Depression, and Resurrection City after Martin Luther King Jr.'s assassination, and other occupations. Eight long teepee dowels came out, and the crowd cheered, and everyone moved to the building site, and then the police said any structure would be torn down and everyone responsible would be arrested.

The slow-motion confrontation that followed lasted nearly two hours. A handful of cops stood impassively as a knot of Occupiers shouted at them. Could they name the ordinance they were enforcing? No? Then how could they enforce it? Couldn't they think for themselves? Why were they working for the 1 percent? They were idiots. No, they were part of the system, the system's what's idiotic. Thank you, sister. No, they idiots. Seven people shot last night and they need two dozen cops to guard a fucking teepee?

Meanwhile Von Behren and another volunteer attorney, Kirk Boyd, had gotten into City Hall. They arranged a meeting with a young, bearded fellow named Arturo Sanchez, assistant to the city administrator. Sanchez listened and conceded perhaps there'd been a misunderstanding regarding the intent of the teepee. He said he'd return in five minutes with an answer.

Five minutes became an hour so I spoke with an Oaklander outside in a pink sweat shirt, aged old enough to be your mother. She's a paralegal who came down to see what the day would bring. She wouldn't give her name because she feared retribution from the occupiers, with whom she's furious.

"Look, I support regulating the shit out of Wall Street. I'm progressive and so's the rest of Oakland -- if Bernie Sanders was 20 years younger I'd stalk the man. But this? This is a nightmare. Oakland is sick of this," she said.

"What if this is the next Woolworth's?" I asked, thinking of that 1960 sit-in at a segregated lunch counter that ignited the civil rights movement. "How would you know?"

"They had a specific goal," she replied. "Occupy Oakland has no focus, just rage. No sense of Glass-Steagall, for example. I try to get involved but they shoot me down."

One of the officers getting yelled at was Lt. Freddy Hamilton.

"I'm sympathetic to a lot of what they say, but I also got a job to do," he told me.

A young couple also on the scene spoke of their investment in Occupy Oakland.

"I was going to school in Alaska, studying natural science," said Lucas Wilcox, 29. "But I stopped. Why go further into debt in an inherently dysfunctional system? This here, this is a hub. I don't think democracy of this sort has ever happened in this country."

By and by Sanchez came out and delivered what struck many as an arbitrary compromise: The teepee could be erected in a different spot, would have to be taken down between the hours of 10 p.m. and 6 a.m. and this "encroachment permit" would only last three days.

"It's not a victory till it becomes 24 hours," Phil Horne, another attorney volunteering with Occupy Oakland, told me. "Occupation means occupation; we don't turn it off at night. So we're going to challenge this. No permit is required to exercise a right. That's a slippery slope."

The occupiers -- who now numbered about 70 -- debated the city's position and there was more anger at the cops and at last a decision was made. Everyone surrounded RunningWolf, who climbed up on a metal chair under the boughs of two trees. He lashed eight modestly sized wooden dowels together with rope and then, in about four minutes, it was done.

The crowd clapped and made signs to hang on it then gradually trickled away. The police trickled away, too, at least until the evening's vigil. The night before, when everything was quiet and calm, I'd asked a former Black Panther named Gerald Smith what, in the grand scheme of things, could come of today's event. He made a face that said please understand the significance of what I'm about to say, and then said, "We'll see, won't we?"

The teepee stood about 12 feet tall and was tucked over at the edge of the plaza.