These are not 2011's "most fascinating" people 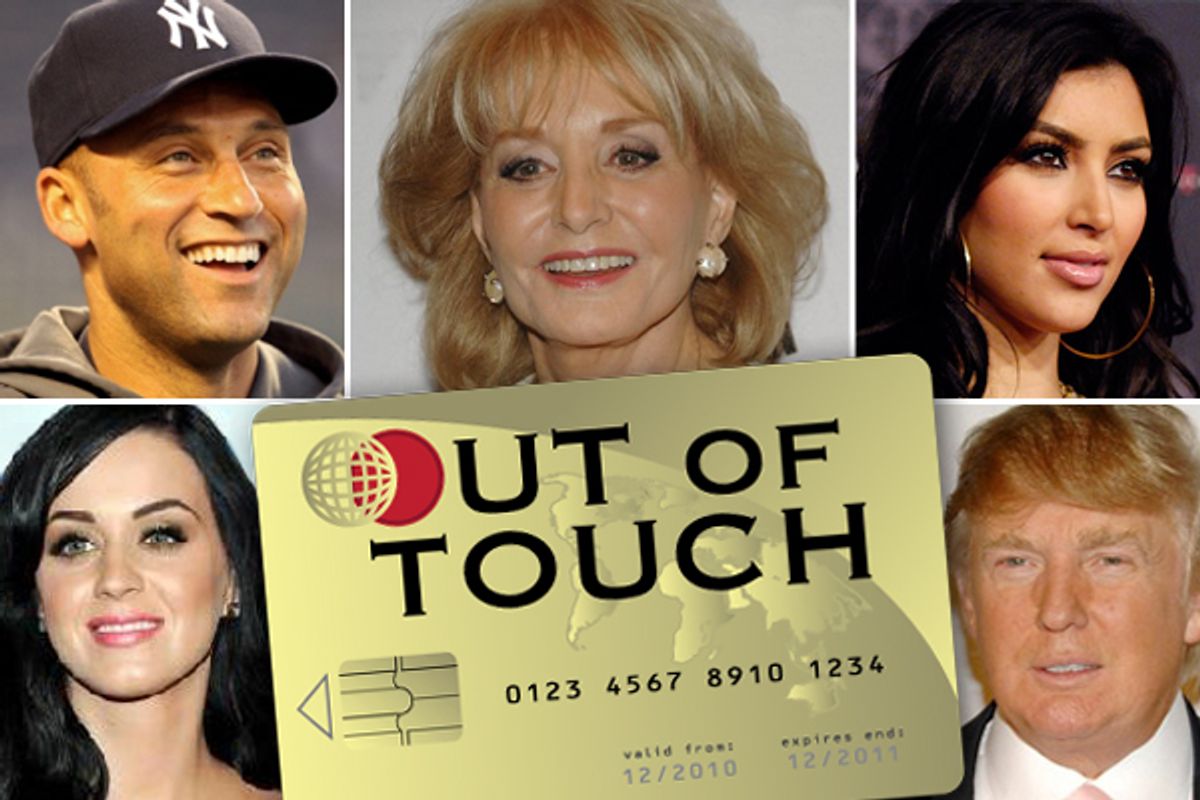 You'd be excused for thinking Barbara Walters' list of 2011's "most fascinating people" is some sort of bizarre joke.

Her headliners include Donald Trump, Simon Cowell and the Kardashians -- not to mention other pop-culture aristocrats like Katy Perry, Derek Jeter and Pippa Middleton. Walters' trump card, the year's single "most fascinating" figure, won't be announced until Dec. 14. But on the basis of the stars whose names have been released, things aren't looking particularly timely.

Walters' celebs may "fascinate" in the sense that they continually hijack our attention -- crowding magazine covers, newspaper headlines and TV screens. But in a year of profound social and economic turmoil -- for individuals and whole continents alike -- are they really the sort of cultural idols we need to pretend are interesting?

This year has seen some of the most spirited revolutions and impassioned public protests of the new millennium. Citizens in Tunisia, Egypt, Libya and Syria have given their lives to change those of their countrymen. The remarkable movement that began as a camp-out in New York City's Zuccotti Park has inspired deep soul-searching in America and further protests worldwide. Stories of individual perseverance -- like Rep. Gabby Giffords', D-Ariz., efforts to recover from a horrific assassination attempt -- have inspired us. Not to mention that we've witnessed stunning successes in film, music, television and literature (Walters nods to this with her nomination of "Modern Family's" Eric Stonestreet and Jesse Tyler Ferguson). Where are the movers and shakers behind all of these truly fascinating political, social and cultural developments? Their accomplishments are miles more relevant than those of affluent reality TV stars or British socialites.

Of course, it's not unusual for Walters to favor pop-culture mojo in her year-end specials; last year, the cast of "Jersey Shore" joined overall winner David Petraeus. An ABC press release says the 2011 list seeks to "[highlight] some of the year’s most prominent names in entertainment, sports and popular culture" -- which it certainly does, especially if you gauge prominence by mentions in Us Weekly. But to sum up a year of spectacular social unrest and heady history-making by trotting out the Kardashians one more time is more than unimaginative: It's out of touch.