How to find good polling news for Mitt Romney 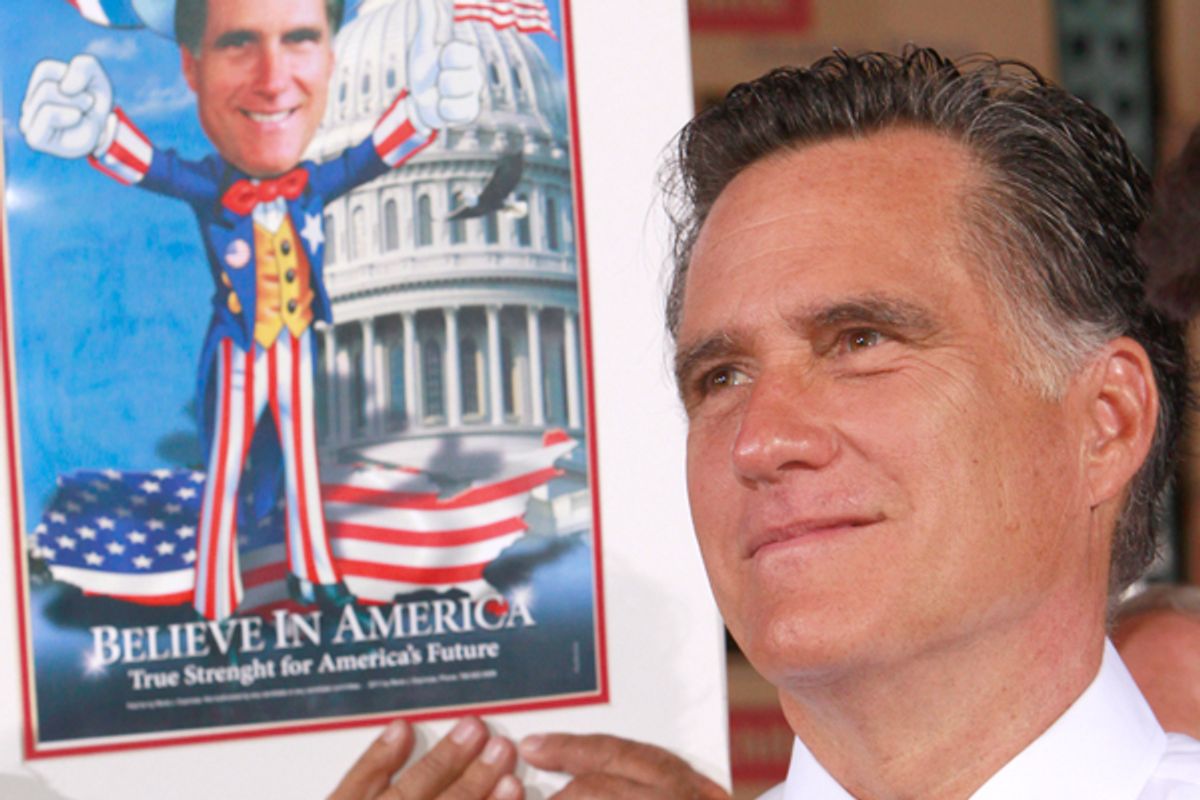 Mitt Romney has fallen behind Newt Gingrich in polls at the national level and in the key early states of Iowa, South Carolina and Florida, and the massive advantage he's enjoyed in New Hampshire seems to be shrinking. And the news is likely to get worse for him in the coming days, with supporters of Herman Cain -- whether or not he formally withdraws from the GOP race -- now likely to flock to Gingrich, who could soon enjoy double-digit leads nationally and in three of the four early primary and caucus states.

Add in the fact that Gingrich is now attaining polling heights that Romney hasn't been able to reach himself, despite being treated as the inevitable nominee by the political press since September, and it's hard to see how there's anything encouraging for Romney in the data that's out there now.

But actually there is. It can just be a little tough to spot. In particular, two findings from recent polls suggest there could be some light at the end of the tunnel for Romney:

1. Personal popularity: A new ABC News/Washington Post poll finds that 59 percent of Republicans have a favorable opinion of Romney, while 26 percent have an unfavorable opinion. This compares well with Gingrich's score of 60-26 and bolsters the view that Romney, despite his inability to break 25 percent in most polls, still has the potential to attract broad support among Republican voters. There's no denying that a sizable chunk of the GOP electorate has been resisting him, but it's not because they don't like him.

Of course, as Public Policy Polling pointed out Tuesday, Romney's favorable numbers among Republicans have dropped nationally and in numerous individual states since the start of the year. But that may not be as significant as it sounds, given the target that he's had on his back for all of that time. The fact is that Romney remains very popular within the Republican Party. Which relates directly to the next bit of encouraging polling news for him ...

2. The purists are running out of options: According to PPP, Gingrich voters in Florida and Montana are now listing Romney as their second choice. Granted, this is a somewhat isolated and random finding -- it's not like Montana is a key primary state -- but it does hint at a possible end to a pattern that has defined the GOP race.

In 2011, we've seen several non-Romney candidates (and, in the case of Donald Trump, one non-Romney fake candidate) explode to the front of the GOP pack only to suffer meltdowns under the spotlight; but their supporters' second choice has never been Romney, so every time one of them has faded away, a new non-Romney candidate has emerged while Romney's own numbers have remained stuck in place. This is why Gingrich has been able to corral virtually all of the supporters who have abandoned Cain in recent weeks.

But if Gingrich wilts in the weeks ahead -- and given his personal and political baggage and his self-destructive tendencies, this is a very real possibility -- Romney may finally be in line to reap a windfall. His broad personal popularity suggests that there is a point at which Republican voters will be willing to say, "Good enough" -- and we may be one Newt meltdown away from it.