Married to a pedophile

As two scandals spotlight the spouses of alleged sex offenders, the wife of an abuser shares her story with Salon 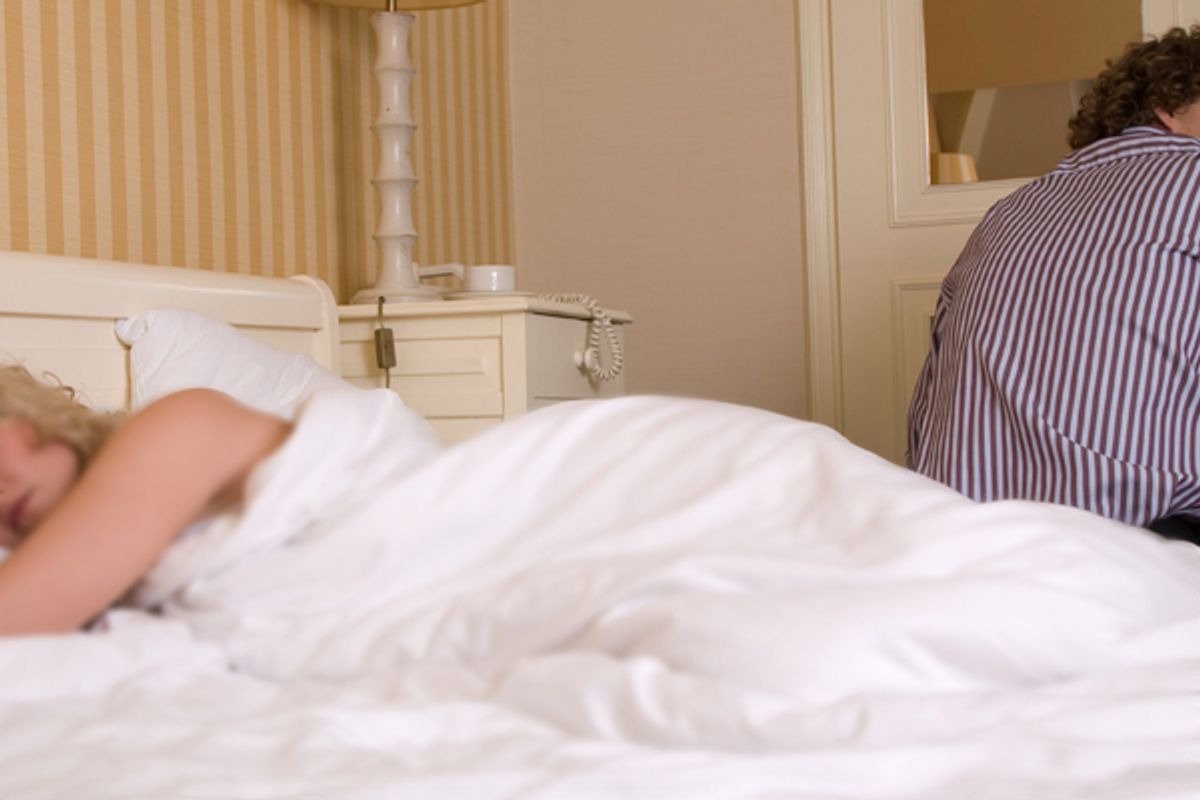 When a detective showed Jasmine a video of her husband confessing to sexually abusing a 10-year-old girl, she says, "It was like a knife through my heart." The 43-year-old creator of HealingWives.com, an online support group for women with similar experiences, explains, "I felt like a victim myself -- I mean, in an instant, my world changed."

The experiences of the wives of child abusers are rarely focused on, but the headline-driving allegations against former college coaches Jerry Sandusky and Bernie Fine are changing that. A recently released tape recording of a conversation between one of Fine's alleged victims and the coach's wife, Laurie Davis, appears to reveal that she knew about her husband's inappropriate sexual behavior. (CNN reported that Davis will claim that the recording was doctored.) Plenty have questioned whether Sandusky's wife, Dorothy, could have been entirely unaware of her husband's alleged abuse of boys over a 15-year period. The truth is that, should their husbands be found guilty, these women, along with Jasmine, are members of a unique and pained group; after all, the typical sexual abuser is a married man. How wives respond to the revelation of abuse varies greatly -- from reporting it immediately to convincing themselves, time after time, that it won't happen again. In plenty of cases, they aren't even aware that their husband was attracted to children in the first place, let alone that he would ever abuse a pre-pubescent child.

That was the case for Jasmine, a Florida resident who asked to go by a pseudonym. On the day of her discovery, she got a call at work -- the local elementary school where she taught first grade -- notifying her that her husband had been arrested. It wasn't until she arrived at the local police department and was directed toward the special victims unit that she began to understand. After being arrested, and confronted with an incriminating taped conversation he had with the victim, Jasmine's husband confessed to molesting a young girl who lived across the street -- on one occasion, in his own home.

The revelation was harrowing for Jasmine -- but before she left the station that night, when a detective asked her what she was going to do, her answer was immediate: "I'm going to stay." That isn't to say that she instantly forgave him. When she went to court the next day for his hearing, she says, "I felt like I was going to a funeral. I was grieving for the life that we had." They were high school sweethearts and had been married for six years at that point. "The person who I thought I knew absolutely everything about had this hidden life," she says, her voice still carrying an air of disbelief. He revealed to her that he had experienced attraction to pre-pubescent girls in the past – in addition to adult women -- but had convinced himself that "he could control it." She says she was angry at him -- not for experiencing these attractions but for not telling her about it sooner, and for putting himself in the position to act on it. Approaching the situation with that mind-set that allowed her to continue in the relationship.

Her husband was jailed for 60 days, served two years of house arrest, completed 10 years probation and is a lifetime registered sex offender in Florida. She's stood by him the whole time and supported him financially when he was on house arrest and unable to work. "I had to think about our marriage and that he had been a good person -- this was really the first thing we had gone through," she explains. "He went through years and years of sex-offender treatment and I could see his thinking change. There weren't so many rationalizations and excuses."

Jasmine's husband now tells her that he no longer experiences attraction to pre-pubescent girls, although even experts who promote sex-offender treatment doubt such a complete change is possible. "There is no evidence that a man can change from pedophilic to non-pedophilic (or vice versa)," says clinical psychologist James Cantor, the editor in chief of "Sexual Abuse: A Journal of Research and Treatment," in an email. "A person can be taught tools to help him deal with his sexual interests, and a person's sex drive can sometimes be suppressed, such as with testosterone-blocking medications. The overall evidence, however, is that changing from pedophilic to non-pedophilic is as impossible as changing a gay man to a straight man." He adds: "The kind and scale of differences that we see on MRIs of pedophilic men are not the kind or scale that are known to change with training, or psychotherapy or other kinds of intervention."

Joan Tabachnick of the Association for the Treatment of Sexual Abusers tells me, "For some, it is a good decision [to stay] and helps to keep the community safer," she says. That's because it gives the offender "a reason to stay connected, to not reoffend." However, she is careful to add, "For others, it may mean that they are not looking at the reality of what is around them."

Jasmine has been with her husband for 17 years now – in the same house where the abuse took place -- and they now have a 1-year-old and a 4-year-old boy. But she says she doesn't worry about her husband abusing their children: "I do want to point out that I have boys," she says, adding that her husband never experienced attraction to males of any age. At the same time, though, she acknowledges that "the experts say it doesn't really matter if it’s a girl or boy. It's the age range that an offender is particularly attracted to." They had their first child during the 10-year probation period; a judge ruled that Jasmine's husband could be allowed to spend time alone with the boy.

Cantor declined to comment on Jasmine's specific situation, but notes that "a sizable proportion -- sometimes a third -- of sexual offenders against multiple children committed those offenses against children of both sexes." In general, offenders target a single sex, but it's also true that pedophiles "distinguish between boys and girls much less" than those who are primarily oriented toward adults.

Some wives convince themselves their husband will change even without a conviction, imprisonment or treatment. Christina Enevoldsen, co-founder of the online support group Overcoming Sexual Abuse, married and had a child with her high school boyfriend, who had admitted to molesting a female relative in the past but swore he would never do such a thing again. When she found blood in her 1-year-old daughter's diaper, her husband "tearfully admitted that he had molested her but promised it would never happen again," she writes in a blog post. "He seemed very remorseful and I thought that since I caught him, he wouldn’t feel safe repeating the abuse. He seemed afraid of losing his family, so I thought that fear would stop him."

But he continued to abuse his daughter for most of her childhood. "Yes, I had been fooled by my husband, but I had also fooled myself," she says. Enevoldsen blames it in part on the repeated sexual abuse she experienced as a child at the hands of male relatives. "Finding blood in her diaper was finding blood in my diaper. I was transported to my own abuse with the same feelings and response: I froze as though my only choice was to lie still and stay quiet."

Denial among close family members who suspect sexual abuse is terribly common – it's why Tabachnick wrote the guide “Engaging Bystanders in Sexual Violence Prevention." Tabachnick attempted to explain what might have been going through the mind of Fine's wife: "We would be asking Bernie's wife to report her husband, bring shame onto her family and her child, lose their standing in the community and whatever love was left in that marriage," she says. "In our society there is a very high cost for reporting -- and the benefit of reporting is very small if you are truly not sure there would be a successful prosecution." (You can find more here on the reasons why witnesses to child sexual abuse fail to call police.)

There can also be a great deal of guilt on the wife's part about the abuse: Molesters who are discovered often place blame on their partner. "He tried to say, 'Well, you didn't give me a lot of attention and things weren't so good in the bedroom,'" Jasmine says. "After years of therapy, I realized that any healthy adult male doesn't do that with a child. It doesn't matter how much attention your wife is giving you."

Jasmine insists that things with her husband are good now, despite the fact that she will have to live with his sex-offender status. His registration publicly lists their home address alongside the details of his conviction for "lewd or lascivious molestation." It isn't what she pictured for her life, but it's what she's chosen, given the circumstances. "Before this happened, I was the person who picked up the paper and said, 'Oh, what a monster!' Until you're in the situation, you don't know how you'll react."