Most of the "Gingrich could win!" columns aren't that convincing 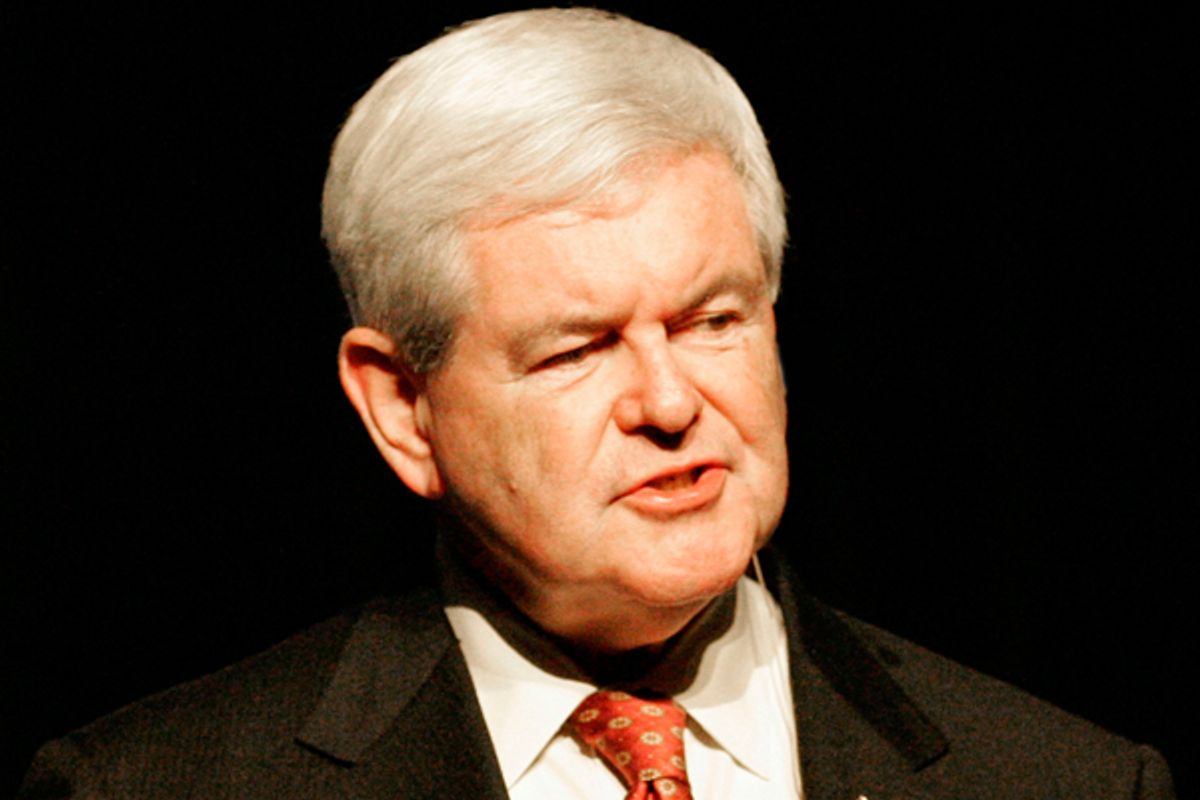 I have noticed that most "How Gingrich could win" columns fail to explain how Newt Gingrich could ... actually win. Take, for example, this Charles Hurt column in the Washington Times. After the usual boilerplate about how, well, the Republicans don't like Mitt Romney much, but everyone running against him has been revealed as a clown, Hurt writes: "As strange as it all may be, here is why the former speaker really could win." I'm all ears! And here's the "why," in three points:

Huh. I hope the Washington Times didn't pay a lot for this analysis, because it fails to actually explain why Mr. Gingrich could win the Republican nomination for president.

We have a flood of these "Gingrich could win!!" stories now, because, following the self-immolation of Rick Perry and Herman Cain (and, so long ago it feels like, Michele Bachmann), Gingrich now holds sudden and commanding leads in Florida and South Carolina. He's leading in Iowa. He's even gaining in New Hampshire.

But ... so did those other losers.

Gingrich's current surge in the polls would have to last longer than any previous pseudo-front-runner candidate's surge did (Perry led national polls for about six weeks, Cain for less than a month) for him to still be leading the pack come January. That's certainly possible, but so is a belated Santorum surge.

And these poll numbers would have to translate into votes, which involves well-staffed and well-funded get-out-the-vote drives -- especially in the wacky caucus states. Gingrich hadn't even bothered to open campaign offices and staff up in early states until essentially this week. He's belatedly rehiring people who quit on him last June. These are all states, too, where Romney already has essential experience campaigning.

Romney's at enough of a disadvantage in Iowa that any decent finish could be painted in the press as a victory, and then he's got New Hampshire and Nevada, where he's always been strong. (Conversely, losing New Hampshire could sink his campaign, but that's still a distant possibility.) Santorum and Ron Paul have spent more time and resources on voter contact in Iowa than Newt could manage if he devoted himself solely to that state for the next month. (And "religious right" voters have more reason to support those two than they do serial adulterer Gingrich.)

If everything breaks for Gingrich over the next month, he could conceivably win Iowa and South Carolina and Florida, and then the nomination would be his to lose. But we're talking about a candidate whose lack of discipline is exceeded only by that of everyone else who failed to challenge Mitt Romney for longer than a month so far this year. The closest I've seen to a compelling explanation of how Newt wins is Josh Marshall's, and even he relies on sketchy intangibles ("But it seems different; it feels different") to make the case.

If Gingrich can sustain his lead past the new year, without busting like everyone else so far ... well, I imagine the White House would be thrilled.