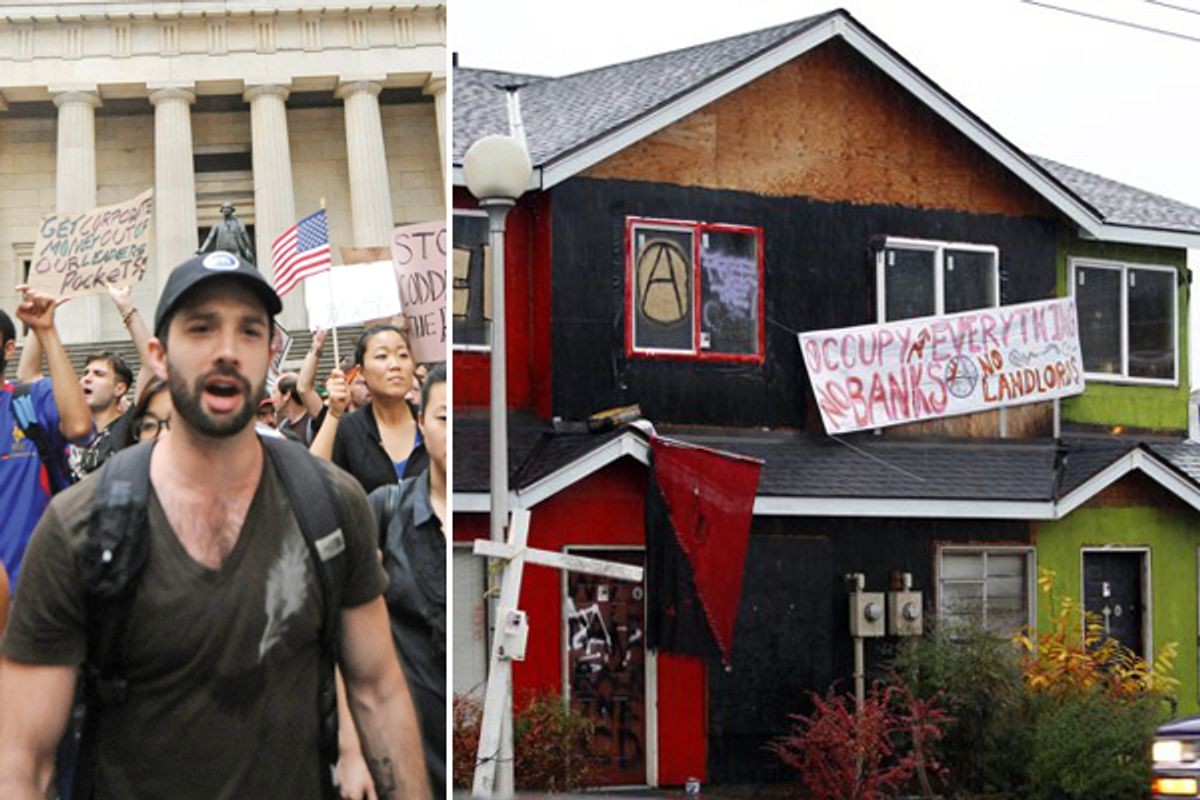 Occupy Wall Street is promising a "big day of action" Dec. 6 that will focus on the foreclosure crisis and protest "fraudulent lending practices," "corrupt securitization," and illegal evictions by banks.

The day will mark the beginning of an Occupy Our Homes campaign that organizers hope will energize the movement as it moves indoors as well as bring the injustices of the economic crisis into sharp relief.

Many of the details aren't yet public, but protesters in 20 cities are expected to take part in the day of action next Tuesday. We've already seen eviction defenses at foreclosed properties around the country as well as takeovers of vacant properties for homeless families. Occupy Our Homes organizer Abby Clark tells me protesters are planning to "mic-check" (i.e., disrupt) foreclosure auctions as well as launch some new home occupations.

"This is a shift from protesting Wall Street fraud to taking action on behalf of people who were harmed by it. It brings the movement into the neighborhoods and gives people a sense of what's really at stake," said Max Berger, one of the Occupy Our Homes organizers and a member of Occupy Wall Street's movement-building working group.

The backdrop for all this is a new study suggesting the foreclosure crisis is only half over, with 4 million homes in some stage of foreclosure. Meanwhile, reports of illegal or questionable behavior by banks and mortgage lenders continue to stream in.

Like many of the Occupy actions that have focused on specific policy questions, this one is being organized by established progressive and labor-affiliated groups along with their allies in the movement. Among the allied groups listed on Occupy Our Homes' website, for example, are the New Bottom Line and New York Communities for Change. On the Occupy Wall Street side of things, members of the direct action working group and the movement-building group in New York have been involved in the project.

Occupy Our Homes' website (which was registered by a former SEIU staffer) has the trappings of a slick professional campaign, with videos featuring the stories of families facing foreclosures and a pledge visitors are encouraged to sign stating:

... that until the banks do their part to help homeowners and to fix the economy, by writing down mortgage principal to current home values, I will:

A network of groups organized as Take Back the Land has been doing eviction defenses and related actions around the country for five years, according to organizer Max Rameau.

"Now with this Occupy movement ramping up, I think we have a significant chance to keep large numbers of people in their home," Rameau told Democracy Now earlier this month. "[The goal is to] not only force the banks to allow the family to stay in the home. But also then force policy changes that would help thousands of other people for whom we're not doing eviction defenses."

We saw a similar dynamic in the preexisting campaign to extend the millionaire's tax in New York, which has benefited from new energy and a new banner offered by the Occupy movement.

Will the new Occupy push on foreclosures pick up any steam? I'll be covering whatever happens on Dec. 6, so stay tuned to find out.